A Desert Also is a Teacher, AZ, USA

One doesn't usually think of deserts as "lush". Yet the Sonoran Desert running in the US through Southwest Arizona and part of California into parts of Senora and Baja, Mexico is among the most lush in the world.

Plants such as the agave, coulter's globemallow, creosote bush, desert mariposa lily, mesquite, ocotillo, palo verde and the stately, world-famous saguaro cactus thrive there. Animals such as the raccoon-like coati, javelina, elf owl, gila monster, kangaroo rat, pack rat, roadrunner, sidewinder, and tarantula have found their niches there. And after a good -- if rare -- rain, many of the 2,000 species of flowering plants explode into bloom. 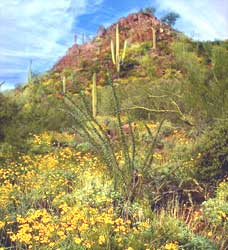 Educators and scientists at the Arizona-Sonora Desert Museum in Tucson are using GLOBE protocols to help them monitor different ecological communities within the desert. The museum's mission is both educational and scientific and staff members there believe GLOBE fits just right.

"We interpret the desert and we think that a lot of this monitoring will be very useful for our research staff here," said Susan Williams, the museum's Director of Education. They study both living and non-living features of the desert. 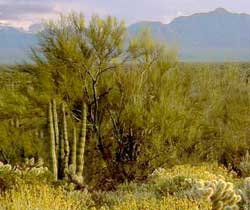 "I've been working in long-term ecological studies with school groups for a long time. GLOBE helps teachers bring in the abiotic components of ecology, which often get left out and which are critical. It's important that kids understand that abiotic elements define the biome," said Williams.

Abiotic features are the non-living features of a site, such as soil moisture, water pH, min/max temperature and other factors GLOBE protocols measure. Although they aren't biological, abiotic features tell a lot about an area and influence life there.

During the Desert Museum's all-day "desert safaris," high school students from Tucson-area schools use GLOBE protocols to monitor the soils and atmosphere of study sites in two distinct areas of the desert: the creosote flats and the uplands.

The flats host mainly evenly spaced creosote bushes, an occasional barrel cactus and a few herbs. The "uplands" area has more of the rich bio-diversity the Sonoran Desert is famous for. The ecological differences are stark and become even more intriguing as students take their measurements and look more closely at the area's biotic and abiotic features.

"The GLOBE program and activities are an invaluable addition to our Desert Ecology Science Safari. The high school students and teachers really enjoy the hands on scientific protocols in the field and in the lab, especially using the sling psychrometer and doing soil moisture and fertility analysis," said Kathy Moore, the museum's GLOBE-trained education specialist.

Although Tucson is not a huge metropolis, it is an urban area. Students begin their safaris just happy to be outside among the cacti, said Jacquie Kahn, who worked with Moore to incorporate GLOBE into museum education programs.

"By the end of the program, students have generated all kinds of questions. They get very excited, not only about being in the desert but about possibly being an ecologist," Kahn said. "GLOBE really fits in perfectly with our mission to get research going on in the classroom, to get kids to do actual science."

Teachers are also excited about the wealth of data they can use to continue their students' desert research even when the safari is over, Kahn said.

"One of the beauties of the GLOBE Program is that we can collect data over a long period of time and have it available to the teachers," she said.

"Next year the museum wants to start using GLOBE protocols in student research of the desert's rich riparian areas -- areas along rivers and streams that allow trees and plants to thrive. The museum also will rely on GLOBE for many of its summer camp activities," Moore said.