The (Ground) Truth About Barksdale Students

Data from satellites aren't good enough by themselves so scientists need the fifth-grade students from Margaret G. Barksdale Elementary school in Conyers, GA, according to GLOBE teacher Marty Ross's sales pitch to her students. 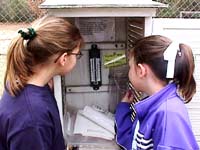 "My students buy into the fact that their dedication is the only way the world is going to know what is happening in Rockdale County, Georgia," Ross said. "Once I explain to them about the satellites and show them the resolution of the pixel, they tell me that it isn't good enough."

The Barksdale pupils are indeed sold on ground-truthing -- the process where GLOBE students gather data to virtually confirm or deny the truth of satellite pictures that scientists use to study the Earth. The fifth-graders even take atmospheric and cloud cover measurements on holidays and during the summer as well as during the year. And they cheerfully follow through on the extra GLOBE responsibilities. As a result, they have one of the best reporting records in the GLOBE Program. 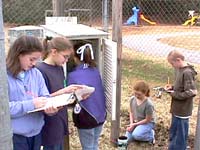 Creation of a highly structured and well-organized system for measurement-taking responsibilities has been key to her students' success, Ross said. She also recruits parents to the GLOBE team by introducing the GLOBE Program at an orientation before school ever begins.

Ross says she's lucky to have an teacher's aide, whom she trained in GLOBE protocols and who is responsible for taking rotating teams of kids out into the field. She has also trained other adults at the school who are able to help.

As always, the trickier part is assigning weekend and holiday duties and actually getting things done when classroom doors are closed. For non-school days, Ross signs up parents well in advance, using various forms to explain, remind, double-check calendars and close all loopholes. When parents do balk at following through on their commitment to go to the study site, Ross said their children don't usually let them off the hook.

"The children feel responsible. We've talked about how data isn't good to you unless it's done over a period of time and unless it's consistently reported," Ross said. "They know the bottom line is: show up with the data. So if parents try to say they can do it Saturday but not Sunday, for example, their children usually fuss at them."

She also has a back-up system, a core team of dedicated parents and former students who can be called on at the last minute for the few times when Ross's well-oiled GLOBE measurement-taking machine breaks down.

One parent was so impressed with Ross's introduction to GLOBE that he not only participated when one daughter and then another went through Ross's class, but he also became a GLOBE trainer himself. Paul Schlumper became part of the Georgia Tech GLOBE Partnership while he was an engineer at the university after hearing Ross's initial pitch to parents. 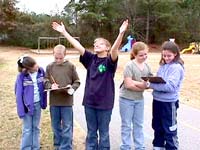 "The thing I remember is that first day, when you meet all the teachers. Marty always had a GLOBE presentation. Her enthusiasm and her professionalism helped to spark my interest," Schlumper said. "The real key to GLOBE is not just the hands-on aspect, which the kids enjoy. It's also feeling like they were part of the scientific research community by submitting their data."

Ross incorporates GLOBE into math and geography studies as well as scientific subjects like natural resources, ecology and habitat.

"GLOBE comes up all year long. We're always referring to it," she said. "They're excited by GLOBE. They love their little clipboards and they like technology. I fully believe that 10-year-olds can understand a whole lot more than they're given credit for. But you have to teach it to them."