A lot of GLOBE teachers appreciate the support they get from parents. At Lake Windward Elementary School, Colleen Jones is a standout in that category.

Since 1997, Jones has been an inspiration for the fourth-graders at Lake Windward, in Alpharetta, GA, just north of Atlanta. She has worked with every child, parent and teacher at Lake Windward who has participated in GLOBE. 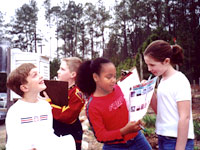 "I once heard an environmental educator say that when children are outdoors, they learn. That's always inspired me to keep this going," Jones said. "I love to get them outdoors and to let them know they're being scientists."

Jones has long been active in the local Parent/Teacher Association (PTA). She chaired the PTA's Environmental Education Committee in the nineties. "When we saw GLOBE then, we thought it would be a very good thing," Jones said.

"When fourth-graders hear the word 'scientists,' they think it's something way beyond them," Jones continued. "But when I tell them they're doing something scientific, it clicks. I think the kids get a lot out of GLOBE because of the hands-on, outdoor aspect. It brings so much enjoyment and the kids really understand that it's important work, that it's beyond themselves." 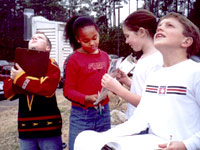 Since Jones' 1997 GLOBE training, her PTA committee assignment has changed to chair of the "GLOBE Weather Committee," and she has the involvement of more parents and teachers.

Jones recruits a handful of parent volunteers at the beginning of each school year. Every Monday, Jones works with a new team of five students, and a parent-volunteer takes them out every day the rest of the week. Each day, one student member of the team takes a turn delivering an afternoon weather announcement based on their GLOBE data.

"Parents think it's great. They're really in awe of what GLOBE is. They see how attached it is to the scientific community, that it's not just a weather lesson. It's science and it gives kids a vision they might not have." 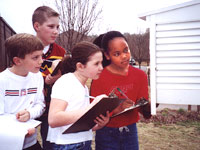 Lake Windward's teachers value her GLOBE work, Jones said. "There's so much that teachers are expected to do, but they support GLOBE and appreciate it."

Jones herself values the way GLOBE has pulled together parents, teachers and students, who faithfully collect Lake Windward's data for GLOBE scientists.

"I think for our society in general, for the most part we stay in our homes, get in our cars and go by ourselves from place to place. It's important to form communities, get to know each other," Jones said. "We know we're doing GLOBE as a benefit for the Earth, for the scientists, for all of us."