GLOBE teacher Carol Boyce returned challenged and inspired last summer from two intensive weeks with GLOBE's principal visualization experts at the National Aeronautic and Space Administration (NASA). Little did she know that in less than a year she would help her school achieve one of her region's most important teaching awards.

"When I came back from the NASA internship, I wanted to really get going on GLOBE," Boyce said. "Now we have 30 students who meet after school, volunteers from the third, fourth and fifth grades. We have more GLOBE teachers on board, some parents are involved and we have some high school kids helping out. Everyone is volunteering for GLOBE." 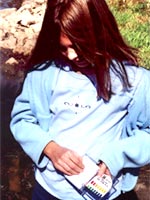 Boyce is a GLOBE teacher at both Orange Elementary and Kittrell Elementary schools in Waterloo, Iowa. Orange Elementary earned the University of Northern Iowa's Educational and Technology and Training Institute's (IETTI) "Showcase" award for her use of GLOBE in the classroom.

The "Showcase on Educational Technology" is a statewide initiative of the IETTI, the Iowa Department of Education and the Iowa Distance Education Alliance, Iowa's "Star Schools" project. Each year the "Showcase" project features uses of technology in educational institutions. 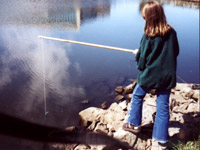 Since 1995, hundreds of schools from Pre-K to college level have applied for the awards. This year, 25 of 170 accepted applications were selected for their outstanding and innovative uses of educational technology. Those projects receive $1,000 each and are featured in various seminars and workshops across the state. The winners also participate in the "Spotlight on Educational Technology" day at the university.

"We saw a lot of good innovative things in those applications," said Marilyn Drury, IETTI's director. "To be one of the 25 speaks highly of what they've done. It's pretty prestigious to win one of our awards."

On "Spotlight" day, teachers will present their winning projects via a statewide communications network. Boyce's GLOBE students will also work a booth featuring the GLOBE Program, their work on atmosphere and cloud cover protocols, and a cooperative project they are planning with two other GLOBE schools.

In that cooperative project, three schools from different areas of the country will put together "mystery boxes." They plan to include data from their GLOBE protocols, land cover information, satellite maps and some cultural information. The students will work on figuring out where their colleagues are from. GLOBE will reveal more details of that project once the "mysteries" have been presented and solved.

Although Boyce generally works as a teacher for the "gifted and talented," she has opened her GLOBE after-school projects to children of all levels and abilities because she believes that nearly all students can find success with GLOBE. "It's great because even some kids who aren't that enthusiastic about school are excited by our GLOBE projects," said Boyce. "Even kids who might be a 'discipline problem' are not when we have our GLOBE meetings. There's a lot of enthusiasm here. I've seen the principal use GLOBE as a selling point to parents, and parents are getting involved and excited, too."