What a Dedicated Student Can Do....

The GLOBE teacher at Tabor Academy retired, but the GLOBE tradition there didn't have to. 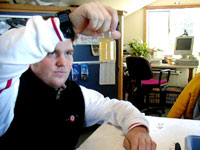 Tabor Academy is a boarding school whose campus sits along a half-mile of Sippican Harbor in Buzzards Bay on Cape Cod. In 1996, Harlow folded GLOBE into his curriculum, believing that GLOBE fit well with the school's oceanology research lab and its marine and environmental science programs. In addition to near-perfect GLOBE data reporting, Tabor Academy has a long-standing tradition of cooperative research with other GLOBE schools who have come to depend on Tabor's consistent reporting.

Student Colin Haley's dedication was evident from the beginning, according to Harlow. Haley is a day student who commutes 30 minutes from his home in Sandwich to the school in Marion. He was a freshman when Harlow began GLOBE at Tabor. 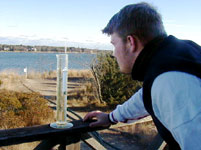 "Colin came out with me every Sunday to do hydrology measurements. His parents would drive him 30 minutes to meet me at the lab and pick him up when he was done. Many times he was the only student there, and at other times he would teach other students how to do the hydrology protocols," Harlow said.

Harlow has retired after 36 years of teaching. His replacement, Will O'Leary, has also been impressed with Colin's dedication.

"By no means is this a requisite - this is his own initiative," O'Leary said. "Until I get trained, I go out with the kids and watch what they do. GLOBE is too important to give up at Tabor. It's real science and it's great to see the personal initiative that Colin has taken, taking measurements rain or shine."

O'Leary is not yet trained in GLOBE . But Harlow hoped that the school's GLOBE measurements and projects would nevertheless continue. 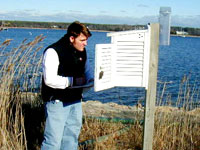 "First it was a pride thing because Tabor hasn't missed a day since Harlow started GLOBE," Haley said. " Secondly, we know that the data we're getting is wonderful information. How the ecosystem is evolving and changing each year is really interesting. We've seen the nitrate levels at the freshwater site change dramatically due to fertilizer levels, for example." On many Saturdays, O'Leary and Haley have traveled to the GLOBE Partner at the University of New Hampshire for Land Cover/Biology seminars. Open to the community at large, as well as to GLOBE teachers and students, the workshops cover such topics as remote sensing, aerial photographs, Global Positioning System (GPS), interpreting satellite images, making land cover maps, monitoring land use changes, and Geographic Information Systems (GIS).

The last, GIS, is computer software that uses computers to add various types of information, such as ground elevation and waterways, to basic maps. GIS can be made to produce maps that keep up with quickly changing events or that reflect complicated statistical analysis. GIS is useful for predicting outcomes and planning strategies.

With his GLOBE-based knowledge of local land cover and GIS, Haley hopes to produce maps that help town officials plan development, a major concern for residents.

Haley's maps could show which areas would be desirable or undesirable for development. As his senior project, Haley will put together a visual and text presentation and ultimately give it to his local town council for review.

Congalton has expertise in GIS and years ago did some development consultation on Cape Cod. He believes Haley's map could be invaluable to his community. "If he does a good job, they'll have some data that could help them think about 'intelligent development.'Congalton said. "What we're seeing here is GLOBE interacting with the community. That's when it's real. People see what GLOBE can do, and it's powerful."