Sometimes the view from faraway space gives you information you can't easily obtain by looking just two feet in front of you. That's what the fourth-grade GLOBE students at Kohlberg Elementary School found when they compared up-to-date satellite images with historical satellite images, maps, and stories of their town, El Paso, TX.

Kohlberg's GLOBE students used satellite photos to help them see that in the past ten years or so the land use by their community has changed dramatically. The students compared current satellite images with ones from earlier in the decade. The images show that residential areas have quickly spread to what was once an expanse of desert. The satellite photos were provided by GLOBE and its Partnership at the University of Texas at El Paso. 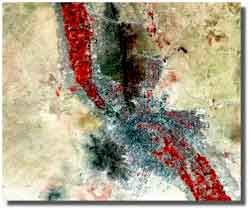 As part of their research on land use changes in El Paso, they also met with park rangers from Franklin Mountain State Park and Chamizal Memorial National Park. The rangers discussed what plants and animals once thrived in places where houses now stand. They also brought satellite images and maps showing where the city El Paso once stopped, leaving the desert largely to animals and insects.

"We talked about the west side of the desert and the impact of people moving in, how urbanization affects the flora and fauna," says Gilberto M. Campa, a park ranger with Chamizal, of the GLOBE students' project. "They were very well versed in this issue and had a lot of interesting questions." 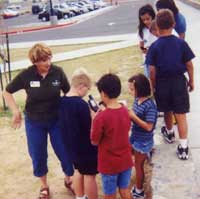 The Chamizal National Memorial Park commemorates the peaceful 1963 settlement of a century-long Mexico-U.S. border dispute. The park is named for once-prevalent tumbleweed-like plants that have disappeared as El Paso expanded. Campa called the chamizos a perfect example of how development and urbanization has moved aside some native species. Where chamizos once grew, broke loose from the soil and tumbled by in the wind when many of Kohlberg's fourth-graders were babies, car drivers now pass by, skateboarders glide, and the screen doors of houses bang shut.

As part of their regular GLOBE activities, Kohlberg GLOBE students have used the Global Positioning System (GPS) and conduct atmosphere and soil protocols. Their teacher, Amy Marlin, has embraced GLOBE in her quest to provide her students with sophisticated science lessons. In fact, in some circles, Marlin is known as "Mrs. GLOBE." She got the moniker last year when Parent-Teacher Association (PTA) president Patty Hughes presented Marlin with an $850 grant to buy GLOBE soils tools and other equipment. Hughes accidentally referred to Marlin as "Mrs. GLOBE." The name has stuck.

"GLOBE has sparked things in all directions," says Marlin, who began using GLOBE in September 2000. "The kids love it. Sometimes you think they're not catching on and - boom - they tell you their GPS reading."

Marlin took out her "Mrs. GLOBE" hat again at the beginning of this school year, when she accepted yet another $1,000 grant from the El Paso Independent School District (EPISD). Last year, Marlin had garnered a $1,000 award from the EPISD to fund GLOBE activities.

The PTA grant was a supplement award to the district's grant. Earlier, an anonymous PTA parent had paid for the instrument shelter. The PTA has a policy of supporting worthwhile projects and supplementing district grants when it sees a need and the value, according to Hughes. Members of the PTA believed that GLOBE's hands-on approach to the study of the environment and its use of technologies like GPS satellite information were worth supporting and expanding, she said.

"We raise money to help out teachers," Hughes said. "When Mrs. Marlin approached us, she was very specific about what she wanted to do. We're very proud of her and her students."

Renee de Santos, communications specialist for the EPISD, has also taken note of the level of science Marlin's fourth-graders are capable of. So much so that she featured Marlin, her students and their GLOBE activities on her local cable show.

"I was so impressed with Amy Marlin and her fourth grade students at Kohlberg Elementary," de Santos said. "When I visited her class to tape our cable TV show, Amy's class was enthralled by the GLOBE curriculum and activities. For them, GLOBE isn't just about learning. It's about having fun too."