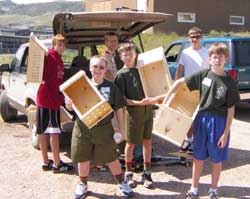 Eagle Scout candidate Greg Colton with Troop 83 from Ft. Collins, Colorado, led the construction effort of building 11 GLOBE instrument shelters which will be donated to local GLOBE schools. Boy Scouts from several Fort Collins troops teamed up on August 21, 2004, at Colorado State University's Atmospheric Science Building on the university's Foothills Campus, to participate in this activity. 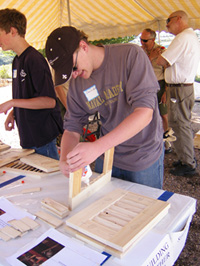 The Eagle Rank is the highest rank within Boy Scouts and is awarded to projects demonstrating a dedicated level of leadership and contribution to their community. Less than 2% of all boys involved in the Boy Scouts attain this rank. The event was supported by United Building Centers and Mawson Lumber & Hardware Company, who donated the wood for the instrument shelters, and Brown Enterprises who precut the forms for assembly. The NASA CloudSat mission was also one of the sponsors. 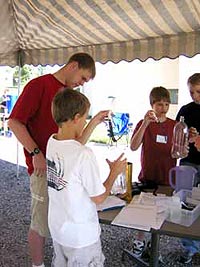 Before construction began, the Boy Scouts learned more about the environmental research that will be conducted with the atmospheric instruments that will be housed in these shelters. Construction occurred over a 3-hour-period during which boy scouts moved through different assembly stations where precut pieces of the shelters were ready to be assembled. "It was great to watch the Scouts work together to build instrument shelters for local schools. These shelters will aid GLOBE students in their quest to study the environment. The Scouts also proved to be excellent students themselves as they learned about atmospheric science principles from researchers at Colorado State University," said John McLaughlin, member of the GLOBE Program Office Science Team. 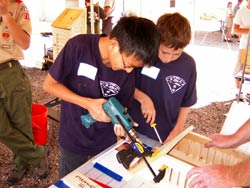 During construction breaks, CSU graduate students, Todd Ellis and Kyle Leesman, as well as Kelly Dean, Research Associate with CSU's Department of Atmospheric Science, led different atmospheric science activities which contributed to the requirements for earning the Boy Scout Weather Merit Badge. These activities included hands-on experiments to see how clouds are formed and understanding development of weather fronts. "Greg did an outstanding job of arranging the construction of several instrument shelters to be used in Colorado schools that wish to participate in the GLOBE Program", commented Kelly Dean.

The Boy Scouts also observed the collection of real-time satellite imagery from the NOAA-17 weather satellite. According to Nan McClurg, Regional Director of Partnership activities in the U.S., "Greg's Eagle Scout project clearly demonstrates how the GLOBE Program can partner with community involvement, allowing leadership opportunities and educational goals to merge resulting in a true GLOBE Learning Community." The GLOBE Learning Community (GLC) concept encourages the participation of a broad range of community members who share a common commitment to supporting teachers and students in the implementation of GLOBE for the benefit of their community. A GLC might begin as a GLOBE Partner based at a university working with teachers and students from primary and secondary schools in the local school district, and then branch out to include parents, youth clubs, scientists, senior citizens, other colleges and universities, daycare centers, museums, businesses, government agencies and more. Greg Colton's Eagle Scout Project is an exemplary model of how GLCs make learning and science relevant by focusing on the local and regional environment. The event will be aired multiple times on Thursday, August 26, on Colorado cable Channel 25 between 8 p.m. and midnight. For more information on the project described above see: http://eagleproject.coltons.us or the Web site for Boy Scouts of America athttp://www.scouting.org For instructions for building a GLOBE Instrument Shelter, please see "Instrument Construction, Site Selection and Set-Up" within the online Teacher's Guide at www.globe.gov.