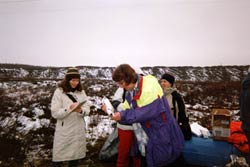 Since 2001, 15 GLOBE schools in Canada, Finland, Iceland, Norway, Russia, Sweden, and United States have been working on a joint research project to better understand the distribution of Persistent Organic Pollutants, commonly called POPs, in the Arctic region. Teachers and students at these schools have been working closely with two scientists, Eldbjorg Heimstad and Geir Endregard, at the NILU Polar Environmental Centre in Tromso, Norway. A recent publication, Circumpolar Investigation of Brominated Diphenyl Ethers-Connecting Research and Education, discusses results of POPs research that include data collected by GLOBE students.

Now, the GLOBE Arctic POPs Project has received a grant from SAS and Coca Cola Environmental Foundation for 2004. This is wonderful and deserved recognition of the hard work and dedication of the students, teachers, and country coordinators!

During first two workshops held in Fairbanks, Alaska, in August 2001, and Akureyri, Iceland, in 2002, workshop participants were taught Arctic POPs fish sampling techniques and GLOBE protocols. In August 2003, participants from Sweden, Russia, Finland, Norway, Iceland and the United States met for the third GLOBE Arctic POPs Workshop near the Arctic Circle in the town of Pajala, Sweden. After two years of data collection, teachers were now able to report the results of the data collection, and students gave oral and poster presentations of research projects they conducted using GLOBE environmental and Arctic POPs data.

In the course of working together for three years, project participants have become friends and colleagues. Between presentations and training sessions, time is spent to share cultural experiences and discuss events that have happened since they last met. At Pajala, participants visited a forest where reindeer were once ranched, a cloudberry bog, a local tannery, and had the opportunity to experience a Swedish sauna and the local cuisine.

The fourth workshop will be held in Norway in June 2004. As it now stands, this workshop will conclude the project. For more information on the collaborative project, visit the GLOBE Arctic POPs web site http://www.nilu.no/niluweb/services/arcticpops/