Queens College became a GLOBE Partner in the Spring of 2001 and has already trained GLOBE teachers from over 150 schools, environmental centers and agencies in all five boroughs of the city as well as the three surrounding counties. 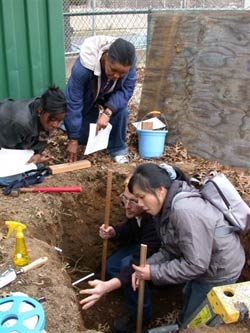 Community outreach was an essential part of the partnership implementation plan from the very start. Part of the motivation for this was assuredly the scale and organizational complexity of the service area. Dr. Ludman, Professor and Director of GLOBE NY Metro understood from the beginning that there was no way a small Queens College group could introduce GLOBE to the entire region without significant help, particularly from the corporate sector.

GLOBE NY Metro's initial approach to the corporate community was, of course, for financial support. Financial support has led to potentially even more valuable forms of assistance from one of New York City's major energy providers, ConEdison. As "ConEd" revamped its long-range philanthropy to emphasize two areas, environment and education, they made GLOBE NY Metro a centerpiece of their philanthropy. In addition to providing increasing amounts of financial support each year, ConEd has presented certificates to each school at GLOBE NY Metro graduation ceremonies; made a magnificent conference/learning center available for GLOBE activities; and has identified other corporations that share their environmental vision and therefore could be potential supporters of GLOBE activities. 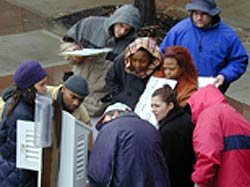 Con Edison's political connections are vast and they are helping by arranging meetings with NYC government and education leaders to place GLOBE on everyone's radar screens. It was ConEd's VP for Government Relations who connected Dr. Ludman with the City Council Education Committee Chairperson's office and has arranged an invitation for him to testify at an Education Committee Budget Hearing. This will open the door to apply for substantial funding for the forthcoming fiscal year. The funding is a tremendous aid to GLOBE activities, but the connections with government and education leaders are priceless in building a creating a sustainable presence of GLOBE in the NY Metro area.

When asked what he has he learned about community outreach, and what advice he would give to other partnerships that are in large urban areas, Dr. Ludman says: "Perhaps the most important thing that I've learned is how much the educational community wants and needs this kind of help..."and, on the importance of growth, " to grow your program to levels concomitant with fiscal support...." 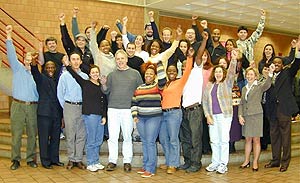 While enjoying their success, GLOBE NY Metro is actively engaged in scaling up their efforts.
The Take-Home Message: Develop your corporate community funding contacts and show publicly that GLOBE is a central player in your large urban area's environmental and educational circles. Both are invaluable in insuring an urban Partnership's ongoing growth and success. Through the assistance of the NYC Council's Environment Committee Chairman (and Dr. Ludman's local councilman), the entire Queens County Council delegation requested and received a $50, 000 allocation this year for GLOBE training in the borough.

For more information on the GLOBE Program at Queens College, visit http://qcpages.qc.edu/qcglobe/index.html.