"With a little help from its friends" GLOBE shines in Uruguay, Paraguay and Argentina

The popular song "A little help from my friends" by the Beatles describes how important our friends are to us, and it nicely captures GLOBE's philosophy of exploring new frontiers hand-in-hand with a hugely diverse group of partners.

GLOBE's August 2004 workshops in Argentina, Uruguay and Paraguay, as well as GLOBE itself in these 3 countries, are the dynamic results of teamwork and unique contributions by an impressive group of partners, so we thought we would use these examples to show just how GLOBE excels "with a little help from its friends"! 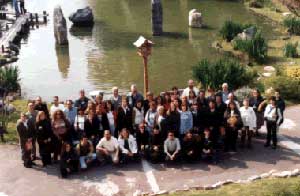 Argentina: Teachers from regions as distant as Patagonia and Antarctica were among the 50 participants trained at the August 2004 GLOBE Teacher Workshop in Buenos Aires. The General San Martín Military High School and the Japanese Garden in Buenos Aires contributed their grounds and facilities for the workshop, and further support was provided by the Argentine-Japanese Cultural Foundation, and the Green Spaces Foundation. Funding was also provided by the Secretary of Technology and Innovation, the General San Martín Military High School, the U.S. Embassy in Buenos Aires, and the host institution of GLOBE in Argentina, the Business and Social Sciences University. The Secretary of Technology and Innovation paid for transportation for 50 teachers from all regions of Argentina to meet in Buenos Aires for the August 2004 workshop.

The Argentine GLOBE Program receives support from the Argentine Business Council for Sustainable Development (BCSD) (in Spanish, the Consejo Empresario Argentino de Desarrollo Sustentable, or CEADS) which is the national chapter of the international World Business Council for Sustainable Development (WBCSD) begun at the Rio Earth Summit of 1992. In Argentina, the BCSD lets GLOBE make key connections with Argentine businesses and corporations that are pursuing sustainable development initiatives in Argentina's business sector.

Argentina's GLOBE Coordinator, Maria del Carmen Galloni said, "Many countries in Latin America have local Councils for Sustainable Development that often meet 2 times per year. I highly recommend that other GLOBE Coordinators attend these meetings to learn more about opportunities for corporate sponsorship for GLOBE from the business community." 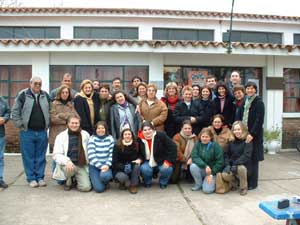 Uruguay: Uruguay's GLOBE Program more than doubled in August 2004 when 14 new schools were trained at the GLOBE Teacher Workshop in Montevideo. The workshop was organized and financed jointly by the U.S. Embassy in Montevideo, the local non-governmental organization Foundation of the City of Montevideo and the GLOBE school "Escuela No. 88 'Las Violetas'".

The GLOBE Program in Uruguay is funded in large part by the Fund of the Americas-Uruguay (in Spanish, Fondo de las Americas-Uruguay, FAU), which paid for GLOBE instrument kits, computers and software licensing for Uruguay's first 11 GLOBE schools. The Uruguayan telecom company ANTEL donated Internet connections to the 11 schools, and Citibank donated used computers. New funding from the Fund of the Americas-Uruguay, through an agreement with the Foundation of the City of Montevideo, made it possible for the 14 new schools to join Uruguay's expanding GLOBE Program, by purchasing a GLOBE instrument kit and supplies for each of these 14 new GLOBE schools.

Cecilia Ramos-Ma��, GLOBE Coordinator in Uruguay, said, "the Fund of the Americas - Uruguay has provided critical support to GLOBE in Uruguay in 2003 and 2004. A range of Latin American countries may find opportunities for GLOBE schools through the Fund." 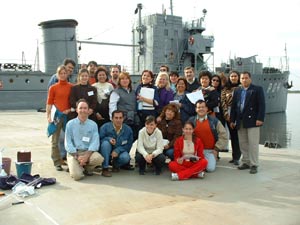 Paraguay: The August 2004 GLOBE Teacher Workshop in Asunción helped launch Paraguay's GLOBE Program by training its very first 24 teachers at 12 new GLOBE schools. The workshop was made possible by support from the US AID (United States Agency for International Development) which let GLOBE use its facilities and Events Room for the workshop, and made computers, internet connections, and technical staff available. The US Embassy in Paraguay, and Environment, Science, Technology and Health Officer Linda Lee in particular, organized the workshop, and discussions are underway to begin other partnerships with the Paraguayan Ministry of Education, the National Science and Technology Council (Consejo Nacional de Ciencia y Tecnologia, CONACYT), and universities in Paraguay to provide a new beginning for GLOBE in Paraguay.

Linda Lee said, "Paraguay's GLOBE teachers are highly-motivated. We are now experimenting with a "contract" strategy in which teachers first agree to implement GLOBE protocols that do not require equipment. After they reach their goals we provide them a limited set of instruments. We are now exploring funding opportunities to support our GLOBE schools in the near future."

In the short time since the August workshop in Asunción already half of Paraguay's new GLOBE schools have reported over 500 observations to the GLOBE database! Congratulations! And welcome to the GLOBE family GLOBE Paraguay!