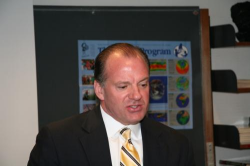 On 9 February 2006, U.S. Ambassador to Denmark, James P. Cain, visited Odense Katedralskole in the city of Odense, on the island of Funen. It had long been a wish of the Ambassador to visit a GLOBE school and there was much excitement in connection with his visit. Ms. Nanna Nyholm and Ms. Lori P. Dando, of the U.S. Embassy Regional Environmental Office in Copenhagen, accompanied Ambassador Cain on his visit. 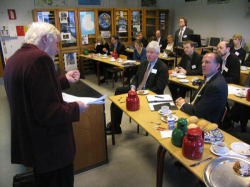 Odense Katedralskole is the home school of Denmark's former Country Coordinator, Flemming Sigh, who set up an impressive program for the Ambassador, showcasing how Funen County high schools are involved in the GLOBE program, as well as Denmark's current Country Coordinator, Jimmy Mangelsen. The main focus of the program demonstrated work the students are doing with geographical information systems (GIS). GLOBE Denmark has been especially focused on introducing GIS to schools. In fact, schools in Funen County are being given GIS software by the county free of charge and also have free access to air photos, maps and environmental data. In addition, the schools are working with remote sensing satellite measurements of the Earth's environment. 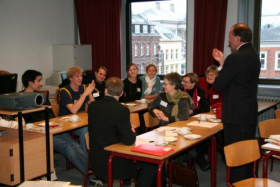 Presentations informed Ambassador Cain of how the schools are incorporating GLOBE protocols into their science studies teaching manuals, about GLOBE networking in the Nordic/Baltic region through BERNET (http://www.bernet.org) and the collaboration between GLOBE-Greenland and Odense Katedralskole on exploring climate change in the North Atlantic stream and its impact on the fishing industry in Greenland. 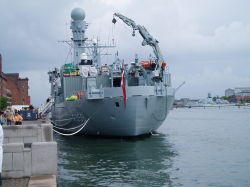 Finally, the Ambassador learned about the Danish GLOBE teachers' involvement in the Danish Galathea 3 expedition,http://www.galathea3.dk/uk. Galathea 3, a scientific research vessel on a world-wide scientific expedition, left from Copenhagen in early August 2006 and will return in April 2007 A number of scientific projects will be carried out on board, mostly within the natural sciences, with a main focus on biological processes, climatic changes and earthquakes. With a direct satellite link from the expedition ship to the classrooms, it will be possible to include the research carried out on Galathea 3 in real time teaching, and show the work of scientists live to the students.

All primary school and upper-secondary school students in Denmark, Greenland and the Faeroe Islands have the opportunity for participating in competitions for a short stay onboard the expedition. 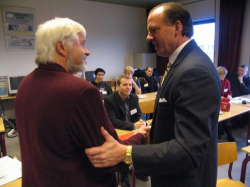 The teachers and students expressed that GLOBE has given them a unique network to share ideas and teaching materials with schools in other countries. Mr. Sigh thanked the Ambassador for the U.S. Embassy's support for GLOBE in Denmark and Greenland, which has reinvigorated the Danish program and the interest of the Ministry of Education. 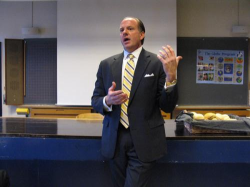 The Ambassador was very impressed with the technology used by the Danish schools and stressed the significance of international cooperation amongst students and the importance of invigorating students' interest in science studies.

More information is available in an article in the Danish High School Teachers' Association magazine.