The science department of the Model Secondary School for the Deaf in Washington D.C. welcomed nine middle school students and their teachers from Anvil City Science Academy (ACSA) in Nome, Alaska on 3 May 2007. The ACSA students are involved in the GLOBE Program and GLOBE phenology studies, as are many MSSD Earth System Science (ESS) students. Students from both schools met to exchange cultural and environmental information about their two localities. 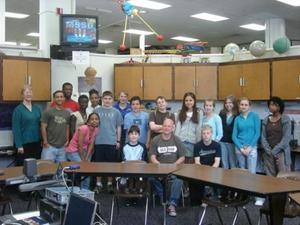 The ACSA students, four chaperoning parents, and two teachers were in Washington D.C., on their second annual field trip to the nation's capital, organized by science teacher Mr. Todd Hindman. The delegation accepted an invitation to visit with the science students at MSSD.

The MSSD Earth System Science students were very interested in talking with the Alaskan students who live near the Arctic Circle. They believe that an understanding of changes in the planet's polar regions is key to understanding the current situation with climate change. International Polar Year (IPY) officially began on 1 March 2007.

MSSD students were excited to meet the Alaskan students and exchange information about their different backgrounds and climates. The Nome students visited three ESS classes and gave a presentation showing animals, vegetation and environments in and around their home town of Nome. Senior Rebecca Lovitch observed, "Sometimes I wish I lived there [in Alaska] because I would love to go ice fishing or see all those beautiful animals that they talked about." After seeing the presentation, MSSD senior Nicole Starkman followed up with a question "Do they often see the muskox and moose?" ACSA science teacher Todd Hindman replied that muskox, reindeer (domesticated caribou) and moose are a regular sight on the outskirts of Nome. They can be seen just a mile or two out of the city periodically during spring, summer, and fall. During winter, muskox tend to hang out on the tops of the surrounding hills, where wind keeps snow swept off. 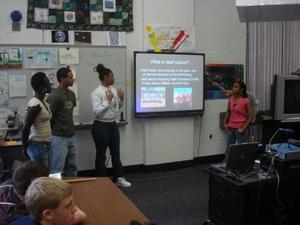 MSSD students in each Earth System Science class created a presentation to share with the ACSA students. One class described the cultures of MSSD and Washington, D.C., while another explained ASL and Deaf Culture. Another class described MSSD's GLOBE budburst study conducted by ESS classes this spring.

Reflecting on the Alaskan students' presentations, MSSD students had many more questions that they later sent by email to the ACSA students. Student Violet Blake asked if it's easier to do environmental measurements in D.C. or in Alaska. Mr. Hindman responded that there is probably not a difference in ease, except for the weather factor. "Getting out when it is minus 20 isn't necessarily more difficult, you just have to have more preparations. I do think that in Alaska you have a great variety of topics to study." 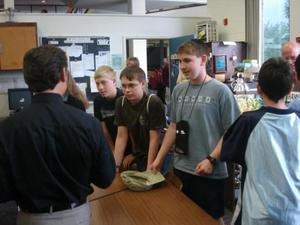 MSSD senior Yair Davidowitz commented "The most interesting point that the ACSC students made was that the temperature there is much more crucially changing. If it becomes one degree higher than 32 degrees then the whole place will melt."

MSSD students were asked to comment on the value of meeting with the Alaskan students. Violet Blake responded "Comparing where I live and the other school's location, well, we both learn science! We research what's out there. We make labs report on what we research."

MSSD senior Yair Davidowitz also felt that the discussions with the Alaskan students were worthwhile. "If the ACSA school hadn't come, we would still think that no one is really getting affected by the global warming effects of climate change. Now I see that what they are experiencing can affect the whole world."