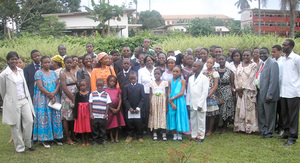 The Cameroon student delegation to the GLOBE Learning Expedition (GLE) in South Africa reported on the event, which took place from 20-27 June in Cape Town, South Africa and presented results of their scientific research project, "The Relationship Between Soil Water Storage and Altitude." Also introduced were highlights of the GLOBE Africa Consortium (GAC) Meeting that took place concurrently in Cape Town. Organizers of the Open Day event presented information about the upcoming GLOBE Student Research Campaign on Climate Change to local decision-makers and GLOBE Learning community members. These presentations served to introduce the work of GLOBE Cameroon to the local community for the purpose of soliciting greater support for improved and expanded in-country implementation of the GLOBE Program. 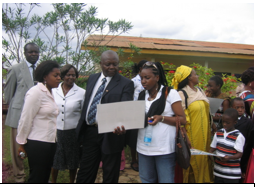 Community members were apprised of the importance of the GLOBE Program as a tool through which students can investigate the impacts of global warming at the local level and learn about environmental issues to collectively reduce the carbon footprint of human activities. The program included a bilingual news brief, in French and English, hosted by the youngest GLOBE pupils (seven and eight year olds).

GLOBE Cameroon has quickly built capacity among its teachers with respect to participation in the ESSPs and serves as a leader in this initiative for the region. Together, the Workshop and Open Community Day served to communicate the GLOBE Cameroon Plan of Action that will be implemented during the 2008-2009 academic year.