GLOBE Germany 2007 School of the Year

Gymnasium Schloß Neuhaus in Paderborn was awarded the prize as GLOBE Germany School of 2007. This honor was bestowed on students and headmaster of the school on 17 November in Bad Hersfeld during the yearly GLOBE Conference. The Award was presented by Professor Seybold, who founded the first GLOBE groups in Germany and started the first evaluation for GLOBE. 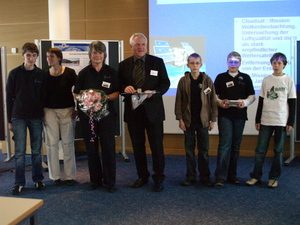 During the award ceremony, students gave a Powerpoint presentation about the Weather Group at the school. Currently comprised of 12 fifth through eighth grade gymnasium students, ages 11 to 15 years, along with their teacher, Ms. Anna Heyne-Mudrich, the Weather Group has been active at the school since 1998. Students gather weather data from a traditional outdoor meteorological station as well as from an indoor electronic system consisting of sensors on the school roof that feed to school computers. The students of Gymnasium Schloß Neuhaus regularly engage in several GLOBE activities. They monitor water quality in a nearby park where three rivers meet; specifically, they observe rubbish development in the park, and take hydrological measurements. They observe tree growth and change among trees found on the school property and in students' gardens at home. Finally, the students focus on atmosphere protocols, taking cloud, temperature and precipitation measurements as the CloudSat NASA satellite flies overhead. 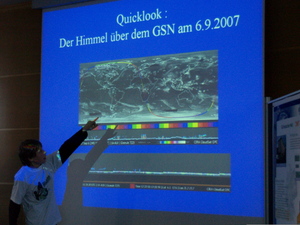 The CloudSat Education Network is open to GLOBE schools that are interested in helping NASA calibrate or "ground truth" their satellites. CloudSat is currently one of five satellites flying in tandem with one another called "The A-Train", collecting atmospheric information on a global scale. This mission was recently extended until 2011. CloudSat specifically measures the vertical structure of clouds. Students time their measurements according to the satellite flying overhead and report their data to the CloudSat. Since these observations follow the GLOBE Protocols, the data is automatically added to the GLOBE database as well. To date,Gymnasium Schloß Neuhaus has reported measurements for over 60 flyovers since October 2006.

The GLOBE community congratulates Gymnasium Schloß Neuhaus for their award as Germany's GLOBE School of 2007 and looks forward to seeing these young students grow into serious scientists and observant citizens in the years ahead.