The 'Satellite Girls' from Akron, Ohio 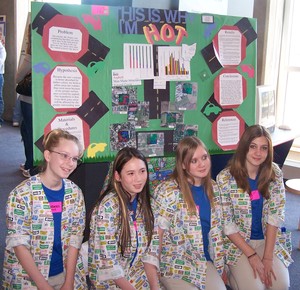 Students from Roswell Kent Middle School in Akron, Ohio have been getting a lot of attention since being selected as one of 5 winning U.S. teams to present their research at the GLOBE Learning Expedition(GLE) in Cape Town, South Africa, this coming June. Seventh-grade students Elizabeth Price, Ashley Falls, Katelyn Jefferys, and Julia Moyer of Akron, Ohio, were inspired to begin their project "This is Why I'm Hot" after their science teacher, Steve Frantz, posed questions to his class based on his observations that snow lasts longer in Smithville, where he lives, than it does in nearby Akron. At the OhioView SATELLITES GLOBE Training Workshop, Mr. Frantz learned the GLOBE Surface Temperature Protocol using an infrared thermometer (IRT) and, when he returned to school, he taught the girls how to take the measurements themselves. After measuring and comparing temperatures in cities throughout Ohio, the girls compiled the data for use in their research project for the school science fair. Their project advanced to the state and then national level. When the girls entered their project in the American competition to send five teams to the GLE, the "Satellite Girls," as they have come to be known, earned this honor, too.

Having won the honor to travel to South Africa to present their research at the GLE, local media took notice. The Akron Beacon Journal showed up to interview the students for a feature news article. Soon after, the students were invited to display their poster in the Map Room of the Ohio State Capitol in Columbus. Several Ohio State Representatives visited the Map Room and posed questions about their research to the girls. Learn more about the girls' research project by viewing and listening to their first podcast, GLOBE: the Ohio Tour.

For up-to-date informatin about the Satellite Girls' past and future adventures, visit their homepage, dedicated to "Inspiring the Next Generation of Earth Scientists!"