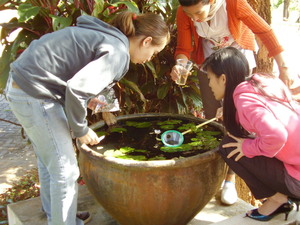 Their first stop was Nakhon Si Thammarat, a town on the east side of the country's southern peninsula on the Gulf of Thailand, home of Walailak University and of Dr. Krisanadej Jaroensutasinee, a systems modeler and his wife Dr. Mullica Jaroensutasinee, a marine biologist who also studies ecosystems science. Together they traveled approximately 50km north to Khanom where they met with 50 students in grades 8—12 at the Khanompitaya School. The students gave a PowerPoint presentation of their investigations of local mosquito species distribution, based on their findings from larvae collected in water containers at their homes. Mosquitoes are known vectors of a number of diseases such as Malaria, Dengue fever and West Nile fever. Changes in incidence of diseases may be linked to climate change. Temperature changes affect vector borne disease transmission and epidemic potential. Increase in rainfall brings an increase in breeding sites, which increases mosquito populations.

Interest in developing a mosquito protocol began with GLOBE students in Bénin in 2001. Students wanted to know why so many people in their community were becoming sick from Malaria. They gathered precipitation and temperature data following two of GLOBE's atmosphere protocols. They then obtained data from their local hospital monitoring Malaria outbreaks by month. They combined the data on a handmade graph and they discovered on their own that Malaria outbreaks typically followed periods of rain. The students in Bénin shared their research and educated community members about the importance of eliminating stagnant water in containers close to their homes that could result in mosquito breeding.This student-generated community service project resulted in a regional effort to monitor Malaria outbreaks in Madagascar and throughout Africa. It is an exemplary example of the benefits of local GLOBE student research as they develop into regional, and now, as we see in Thailand, international GLOBE student research activities. 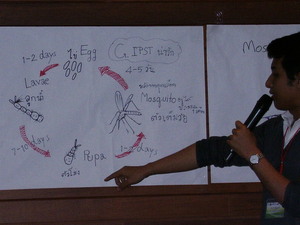 The students in Nakhon Si Thammarat, included in their study Anopheles sp. (Malaria vector), Culex sp. (Japanese Encephalitis and West Nile vector) and two species of Aedes (Dengue fever vector), Ae. aegypti and Ae. Albopictus. They collected larvae from their homes once a month, and brought them into the classroom for identification. The students demonstrated their adeptness with sampling, identifying species, and using microscopes. Their knowledge of the mosquito life cycle and environmental factors that impact mosquito larvae distribution was apparent. The Seasons and Biomes team was impressed with the poise, confidence, and courtesy of these young scientists, and by their facility with presenting in both Thai and English. Clearly these students are engaged in cutting edge research that directly impacts their understanding of mosquitoes as carriers of disease and as indicators of seasonal change. 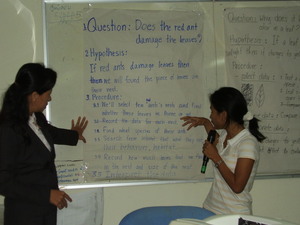 On 12 November, the team met with the president and deans of Walailak University to discuss possible collaboration opportunities. Dr. Sparrow delivered a lecture on Earth as a system, the global significance of the International Polar Year (IPY), climate change and how what is happening at the Polar Regions will ultimately affect everyone around the world. Afterwards, the team met with students for a group discussion of climate change issues. What began as a formal group session quickly broke up into clusters of 2-3 people discussing investigations, methodology, and other relevant topics. Their studies included one student's investigation of hump-backed dolphin identification and population distribution, a young lady's vocalization study of the same species, and another student's senior thesis study of sea surface temperatures. Later that afternoon, Dr. Leslie Gordon conducted an inquiry workshop for upper level undergraduate and graduate students using the new GLOBE Leaf Damage Inquiry Activity. The session concluded with student presentations and critiques of their inquiries.

A special thank you goes to Walailak University who supported the Seasons and Biomes team by covering travel and logistics costs during the very busy and productive two days. 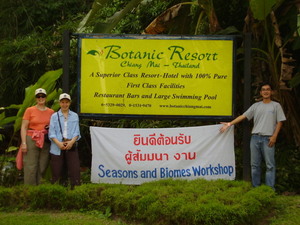 Next, the Seasons and Biomes team traveled north to Chiang Mai where they held a Seasons and Biomes workshop for 80 teachers and scientists from Thailand, hosted and supported by the Thai Ministry of Education's Institute for the Promotion of Science and Technology (IPST). IPST staff provided translation throughout the four-day workshop, held at the Botanic Resort in the Queen Sirikit Botanic Garden, a tract of native northern rainforest 30 km NW of Chiang Mai. In preparation for the workshop, The Alaskan team met with many of the visiting scientists, as well as several of the IPST GLOBE Thailand staff who were well versed in Thai tropical forest taxonomy and agreed to help teachers with questions about tree identification and forest ecology. There are many different types of forests in Thailand due to differing microclimates, extent of rainy seasons, influence of different soils, elevations, proximity to coastal areas, etc. The diversity was mind-boggling to the Alaskans, used to the small number of species in the Arctic. Due to the efficiency of the The IPST GLOBE staff, the logistics moved along seamlessly.

Dr. Pornpun Waitayangkoon, GLOBE Country Coordinator for Thailand and Vice President of IPST, officially opened the workshop and introduced the visiting scientists and the Seasons and Biomes team. The Seasons and Biomes team scientists presented information on global climate change, IPY, the impact of climate change in Thailand, and taught the GLOBE Earth System Poster activity, as well as many GLOBE learning activities and protocols. Thai scientists, gave presentations including "Climate Change Impacts on Land Degradation and Plants" by Dr. Charlie Navanugraha, a soils and land resources scientist with Mahidol University in Bangkok, who discussed the impacts of climate change on land and soil resources in Thailand and "Influence of Climate Change on Seasonal Change: Case Study in Thailand," by Dr. Krisanadej.

Day two began with a talk by Dr. Suwit Ongsomwang, Remote Sensing scientist with Suranaree University of Technology in Nakhon Ratchasima, who gave a detailed overview of how remote sensing data is used in climate change research. Following Dr. Ongsomwang, Dr. Sparrow demonstrated the Budburst, Green Up and Green Down protocols. Drs. Sompong and Achara Thammathaworn, with Khon Kaen University, Khon Kaen, shared their presentation on their work with students in NE Thailand studying plant phenology (budburst), biomes, soils and carbon emissions and sequestration. The entire afternoon was devoted to learning and conducting an inquiry-based research project.

On day three, teachers were given time to go outside to practice the Budburst, Green Up and Green Down protocols. Dr. Soonthorn Khamyong, a forest ecologist from Chiang Mai University, presented "Overview of Changes in Thailand Biomes: Forest Biome." Dr. Krisanadej spoke about "Parah (a native tree) Phenolgy as a Global Change Indicator." Dr. Mullica presented "Mosquitoes as a Global Change Indicator and Mosquito Protocol," as well as a mosquito life cycle learning activity, assisted by graduate student Siriwan Wongkoon. The day concluded with Dr. Gordon teaching "Statistical Analysis for Primary Students Using GLOBE Data," another new Seasons and Biomes learning activity. The purpose of the activity is to provide younger or more inexperienced student researchers with a few basic statistical strategies that will enable them to explore and understand their data. 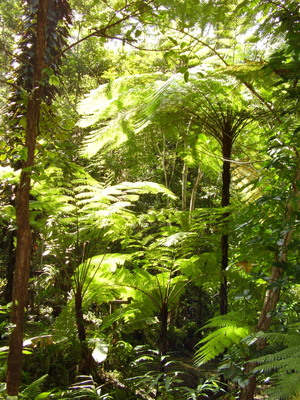 On the final day, the teachers grouped regionally and met with IPST staff and scientists to brainstorm plans about Seasons and Biomes implementation in classrooms and about collaborative research with scientists. The workshop enthused both teachers and scientists, who undoubtedly will be wonderful resources for these teachers and their students. The culminating event was participating in a field trip to the Queen Sirikit Botanic Garden.

Following this workshop, on 21 November 2008, Dr. Sparrow was invited to speak at the Third National Science Education Seminar on the Development of Science Learning Processes Towards Local Wisdom Innovation sponsored by the Council of Science Deans of Thailand. This symposium for secondary and university science educators was convened at Chiang Mai University and is held only once every five years. Dr. Sparrow's presentation was "Climate Change Education in the 21st Century" and she discussed climate change in the Arctic, its relevancy to non-polar regions, and how to become involved in climate change education.

The Seasons and Biomes team could not have reached so many teachers and students in such a short time without the combined efforts of the educators, scientists and staff of Walailak University, GLOBE Thailand and IPST, as well as the scientists and teachers who took time from their busy schedules to attend the Chiang Mai workshop. Their support was critical in making the Seasons and Biomes Thailand experience a success. Thank you!