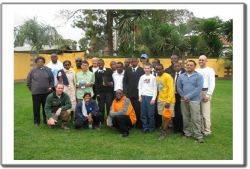 On 21 September 2010, GLOBE Alumni, Scientists, Students, and Teachers arrived at the Xpedition Base Camp in Arusha, Tanzania, to prepare for the second annual GLOBE Africa and Seasons and Biomes Xpedition to the summit of Mt. Kilimanjaro. In addition to being a prime research location for global climate change, many other factors appeal to GLOBE Researchers since there are so many independent ecosystems within the six biomes found on the mountain: Alpine Desert, Cultivated Areas, Heath Zone, Moorland, Rain Forest, and the Summit. International team members traveled through all six biomes, observing variance between climates, ecosystems, and vegetation. The trek was documented with a daily journal on the Xpedition website, which received a total of 18,672 web visits from 95 countries, and 917 cities over the nine-day journey. More than 700 questions were emailed from all over the world, and108 of them were answered directly from the mountain. 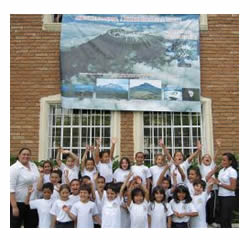 Schools from all GLOBE Regions followed the Xpedition Team as they climbed to the roof of Africa. Students at Notre Dame School in the Dominican Republic followed the journey from start to finish, reading details about the climb, data collection, and submitting questions to the team. Students studied the flora, fauna, geography, and biomes of Tanzania during the trek, and on the final day of ascent, were allowed to come to school dressed for an African Safari!

In addition to a presence online, Xpedition Team Members with representatives from the Tanzanian Meteorological Agency met with GLOBE students from the Lucy Academy, in Addis Ababa, Ethiopia, and Iriboru High School in Arusha, Tanzania. A GLOBE Alumni virtual meeting was also held during the Xpedition led by Ylliass Lawani Africa Regional GLOBE Alumni Representative from Benin.

Xpedition participants arrived to Arusha, Tanzania, from around the world, some taking time to explore the Olduvai Gorge and the Maasai Village prior to the nine-day trek up the mountain. Greg Coverdale, Teacher at Berlin Brandenburg International School in Germany, used his school's International Week as an opportunity to incorporate the Kilimanjaro Xpedition into classroom science lessons. Filling the bulletin board with downloads and journals from the website, he taught students the importance of research methods and of data being obtained on Mt. Kilimanjaro. 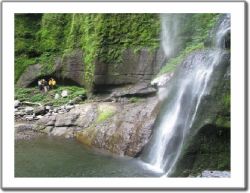 The day before beginning their ascent, team members took a five-hour training hike to the foothills of Mount Meru that concluded with a magnificent view of a 200-foot waterfall. This was a scenic backdrop as team members performed GLOBE Protocols with students from Iriboru High School in Arusha in preparation for GLOBE Research to be conducted on Kilimanjaro. The training was led by Dr. Kenji Yoshikawa, from the University of Alaska, Fairbanks, and Sylivester Chaisamba, Head of the Climatology and Climate Change Department at the Tanzania Meteorological Agency (TMA). During the training events, the Xpedition Team was also accompanied by Mark Brettenny, Africa regional GLOBE International Advisory Committee (GIAC) representative and Director of the GLOBE Africa Regional Office, along with Mary Kivaria, GLOBE Tanzania Country Coordinator, and Robert Lwikolela, from the Tanzania Ministry of Education. 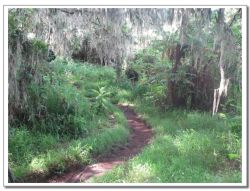 On 21 September Mike O'Toole, Xpedition Leader and GPO climate research campaign team member, lead the nine-day journey with a walk through the Rainforest. He commented, "Providing the means for young people from across the globe to work directly with research scientists in the field on an important data collection campaign is what the GLOBE Program is all about. And, being able to share that experience with countless students, teachers, and followers online in such a way that we are able to share the beauty of the country or region that we are studying makes this type of project even more special."

The first GLOBE Protocol was performed just outside of Rainforest Camp where last year's Xpedition Team planted a ground temperature sensor. Dr. Kenji downloaded data from the digital device that included multiple readings taken every day for the last year. He will apply this data to his ongoing permafrost research. Students performed modified Air Temperature, Cloud, pH and Water Temperature Protocols each day on the mountain in order to submit their data to the GLOBE database so they could share their research with schools around the world, and so that they could compare it with temperature readings in the future.

The next biome reached was the Heath Zone, where there are few trees and mostly shrubs, tall grasses, and wildflowers. The journey through this zone actually took Xpeditioners up through the clouds and allowed them to catch their first glimpse of Mt. Kilimanjaro rising up into the fog. The higher the team climbed, the more sparse vegetation became, resembling desert land.

Anteneh Habtesilassie from Lucy Academy KG-Prep School in Addis Ababa, Ethiopia, asked Xpeditioners, "How is it possible to have six different biomes on one mountain?"

Dr. Sparrows, GLOBE Seasons and Biomes lead scientist answered, "Biomes are determined and named according to the types of plants that can grow, which depends on the geography, topography, latitude, and elevation that results in certain climatic conditions. In terms of plant growing season, every 300-meter increase in elevation is roughly equivalent to moving poleward by 400-500 kilometers (about four to five degrees latitude). Hence as one moves through different elevations on Mt. Kilimanjaro, it is not surprising that different biomes have developed." 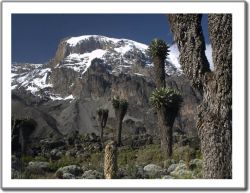 The next zone crossed was the Alpine Desert where team members explored and settled into the Lava Tower Camp, which is completely void of vegetation. The ground was covered in rocks and dust and the oxygen levels in the air became noticeably lower as walking around and breathing became more difficult. The following day, as team members traveled through the Moorland they were able to observe the Giant Lobelia and Senecio trees that are native only to Kilimanjaro. Climbers stepped from boulder to boulder to cross the Barranco Valley wall before settling into Karanga Camp. 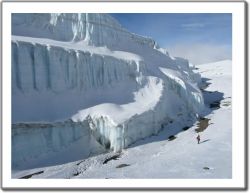 The final day prior to reaching the summit, team members reached the cold, cloudy Glacier Fields. The small, loose rock, cold temperatures, and physical exertion required to scale the steep slope of the mountain made this the most challenging leg of the climb. Team members had the opportunity to view the glaciers up close and compare them to pictures that show where glaciers have melted over the last 20 years.

Ethan Grays from Greek Elementary School in Hope Mills, North Carolina asked, "How do you breathe on the top of the mountain?"

Philimon, a Student Xpedition Member answered, "As we get close to the top of the mountain it will get much more difficult to breathe. We will all have to take our time and walk very slowly, making sure not to get out of breath. Pole, Pole…"

"Pole" means "slowly" in Swahili, the national language of Tanzania, Kenya, Uganda and the Democratic Republic of the Congo. 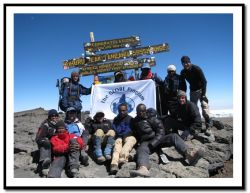 On the 8th day, after a long, cold night of camping, climbers reached the highest point of Africa, the Summit of Mt. Kilimanjaro! Xpeditioners found many challenges along the way, but thanks to the experience of the guides, porters, and previous Xpeditioners, they came prepared to meet those challenges head-on. Porters prepared healthy food and urged them to drink plenty of fluids and to take it "pole," which means slow. Since porters are experienced climbers and accustomed to the altitude they are also able to travel ahead of the group, setting up camp ahead of time for each stop, and transporting materials such as tents, and solar packs used for charging electronic gear. Between this solar pack and a small generator, team members were able to report their travel experiences in real time. Jenny Heckathorn, Xpediton Faculty Member and GLOBE Teacher from Valdez High School in Valdez, Alaska stated, "I went to Africa as an educator and came home a student that has learned a great deal about Africa's unique plant and animal life, amazing culture, wonderful people, and the climatic changes occurring on its highest mountain."

GLOBE Alumni Ed Moshi and Jose Magahema joined this year's Xpedition on the mountain and many GLOBE School-Pals schools and classes followed the trek and submitted daily questions. The GS-Pals project is a web-based international project for students and classes all over the world to collaborate and participate in various GLOBE and Seasons and Biomes related activities to better understand similarities and differences between regions, seasons and biomes, and even cultures. View the new and improved GS-Pals website at gspal.freehostia.com or globealumni.com for more information and news about the schools and Alumni involvement following the Xpedition.

History of the Annual GLOBE Xpedition to Mt. Kilimanjaro

The first Mt. Kilimanjaro Learning Expedition held in 2009 was the dream of long-time GLOBE supporter and leader in the Africa region Mark Brettenny. He realized the educational value and the potential of creating a large-scale scientific research event on the African continent that GLOBE schools from around the world could take part in and follow. In August 2008, he began working with Dr. Teresa Kennedy, Director of the International Division of the GLOBE Program, to plan a regional meeting and training event to coincide with a student research expedition on Mt. Kilimanjaro. He formed many partnerships to ensure the success of the event, including working with Mr. Leonard Moseroche, Director and Commissioner of Secondary Education, who accepted the challenge to host the Africa Regional Meeting and training event in Arusha, Tanzania, to be held in conjunction with the student research activities on Mt. Kilimanjaro.

Dr. Sheila Yule, Education Designer and Networks Coordinator for GLOBE, was instrumental to the planning. She included the GLOBE Alumni Organization from the beginning stages of event coordination and facilitated the involvement of the GLOBE Seasons and Biomes ESSP Project team. Dr. Yule stated, "This event highlights how GLOBE Alumni can serve as mentors, guides and energizers. It also serves as an opportunity for GLOBE Alumni to increase their knowledge and understanding of Earth system science while developing leadership skills for their future endeavors."

The research questions were developed on the mountain by Rogeline Brettenny, GLOBE Teacher and Master Trainer from South Africa, Mike O'Toole from the GLOBE Program Office, and of course by the GLOBE students themselves, in collaboration with the Professor Kenji Yoshikawa and Professor Kenji Narita. The Xpedition team planted data loggers and probes along their trek up the mountain, creating the foundation for this annual research event. The 2009 Xpedition website had over 10,000 visits from all over the world, a number that almost doubled this year.

According to Mark Brettenny, "It is all about creating opportunities for the next generation of scientists." Robbie Everett, a teacher from Kotzebue, Alaska, accompanied his son Parker, and Spencer, the first Inupiaq Eskimo to summit Mt. Kilimanjaro. He commented, "Spencer and Parker have had their lives changed forever and I know that their experiences in Tanzania, Africa, will hopefully make our world a better place". Spencer Adams, 14 years old, stated, "Growing up in Kotzebue, Alaska, I never thought I would have the opportunity to travel to Africa and climb the continent's highest peak with such an amazing group of guides, porters, scientists, and students. This trip helped me discover how other cultures half a world away can be so similar to my own. My experience with the GLOBE Program enabled me to expand my views of the world and realize the abundance of opportunities available to students like myself all over the world."

GLOBE Africa, the GLOBE Seasons & Biomes ESSP, the entire Xpedition Team and the GLOBE Program Office would like to thank everyone for their participation in the 2010 GLOBE Student Research Xpedition to Mt. Kilimanjaro. Following the conclusion of the Xpedition, Team Members have been working hard answering as many questions as possible.

View more pictures, videos and answers to your questions or Email additional questions to the Xpedition team.

Read a firsthand account of the journey taken by an Alaska student and his teacher.