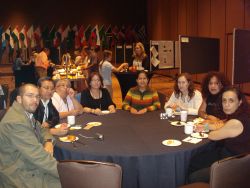 Dr. Teresa Kennedy, Director of GLOBE International Division, welcomed attendants to the meeting and made several announcements, including the reinstatement of NOAA as a U.S. agency sponsor of GLOBE. Dr. Kennedy highlighted changes underway on the GLOBE website in order to better serve the GLOBE community. She also stressed the importance of involving students, teachers, and scientists from each country in the region to ensure relevance of the scientific and educational contexts of GLOBE, focusing special attention on planning and implementing the GLOBE Student Climate Research Campaign throughout the Latin America and Caribbean region. 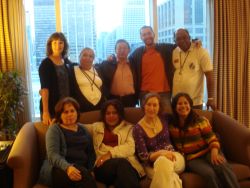 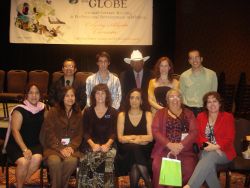 Presently, there are 13 Master Trainers, 575 GLOBE Schools, 890 GLOBE Teachers in the Latin America and the Caribbean GLOBE region, and 551,103 measurements have been reported to the international GLOBE database, which consists of more than 21 million data submissions to date. The regional office ratified an agreement with each GLOBE country within their region to promote the development of the GLOBE Seasons and Biomes Project since this project is consistent with the research activities currently underway in the region. Likewise, the Latin America and the Caribbean Regional Office plans to implement a Scientific Regional Council to evaluate the research conducted in each country; this council will highlight the country most involved and assist with participation in the 2013 GLOBE Learning Expedition, which will focus on climate research. Ms. Aubone invited all attendees to visit the Latin America and the Caribbean Regional website to find out more about GLOBE events in the region and to increase collaborations across the region.

Country Coordinators present at the meeting described current projects and activities occurring in their country. Highlights include: 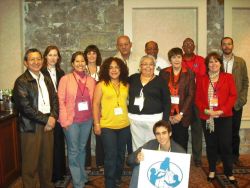 Attendees discussed the integration of GLOBE projects into science and technology fairs in the Latin American and Caribbean region. This item will be more deeply explored in the future and may become an important point of exchange for ideas and experiences.

GLOBE Alumni representative, Juan Diego Calvo Pérez Rodó from Peru, presented on alumni involvement and requested that every GLOBE Country Coordinator work with the teachers in their country to identify new Alumni members and ensure that the region's Alumni Network builds capacity and continues to grow.

The meeting concluded with the reorganization of the region's committees and responsibilities of each country within the region's shared governance structure. The results were documented as follows:

The GLOBE Program acknowledges the hard work of the GLOBE Latin America and the Caribbean Regional Office and the 18 Country Coordinators in the region for their continued dedication to promote GLOBE student research. Their pledge to involve student activities in climate research and expand Alumni involvement in their region maps a path for success over the next year.

Read recent GLOBE Stars in Latin America and the Caribbean:

Read this Star in Spanish.