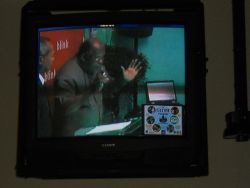 Trinidad and Tobago joined the GLOBE Program on 16 July 1996, when Ambassador Brian J. Donnelly and Minister of Education (MoE) Dr. Adesh Nanan signed the GLOBE bilateral agreement in the capital city of Port of Spain. Trinidad and Tobago was the 36th country to join GLOBE, and it currently boasts 55 registered, and over 250 trained teachers, representing 32 GLOBE schools, thanks to the support of the Curriculum Development Division, the Environmental Management Authority (EMA) and faithful stakeholders from its introduction in 1996.

GLOBE Program protocols and activities have been aligned to the National Biodiversity Strategic Action Plan and the National Environmental Policy, two programs that guide environmental education in Trinidad and Tobago. A draft of the Environmental Education Policy Document was submitted to the MoE more than ten years ago. In addition, the Caribbean Examination Council (CXC) has expressed interest in the GLOBE Program since schools having GLOBE equipment have been using some of the GLOBE activities as part of their school-based assessment program (SBA). 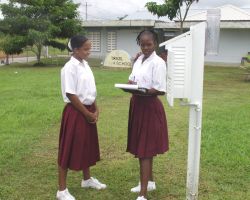 The introduction of Environmental Science as an advanced level subject option has also triggered interest in schools in The GLOBE Program. The MoE policy decisions on these documents are critical to establishing the GLOBE Program as an activity that impacts the school curriculum.

The heightened national awareness of the environment has led to more environmental additions to the school curriculum, and thus GLOBE can play a critical role in this effort. Additionally, the Junior Environmentalists of Trinidad and Tobago (JETT), a group of young environment conscious youth, have adopted the GLOBE protocols in their training and on-going research activities.

The GLOBE Program is the responsibility of the Curriculum Division of the Ministry of Education (MoE). Additional support facilitating GLOBE implementation comes from the Ministries of Agriculture and the Environment as well as energy-based companies, EMA, Institute of Marine Affairs, Environment Tobago, Meteorological Services, Petrotrin, British Gas Trinidad and Tobago, the Rotary Club of East Port of Spain, the Royal Bank of Trinidad & Tobago, the Water and Sewerage Authority (WASA) and the U.S. Department of State, which supported several projects including the White Water to Blue Water (WW2BW) regional project in 2004. The University of the West Indies (UWI) provides technical support for GLOBE through the Faculties of Agriculture and Natural Sciences, Engineering, and Education. 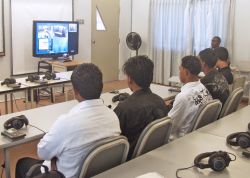 The Telecommunications Services of Trinidad and Tobago (TSTT) facilitated this historic launch of the first GLOBE Workshop integrating Emergency Care and Disaster Preparedness into a community training that took place at Holy Cross College, a GLOBE school in Arima, on 14-15 December 2010. The Video Conference link-up, which took place during the Opening Ceremony, was made possible through the initiative of the Corporate Communications of TSTT, a GLOBE Partner since 1997, which, as a good corporate citizen, provided the platform for students and teachers learning in virtual space. 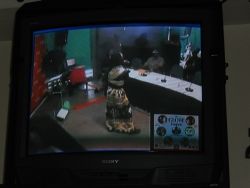 A minute of silence was observed during the Opening Ceremony as a mark of respect for the dedicated work of Professor Maria del Carmen Galloni, former GLOBE Country Coordinator of Argentina and the GLOBE International Advisory Committee Representative for the Latin America and Caribbean GLOBE region, who passed away earlier in the month. 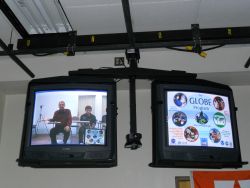 Guests joining via video conferencing and subsequent training events included Dr. Teresa Kennedy, Director of the GLOBE International Division representing the GLOBE Program Office located at the University Corporation for Atmospheric Research (UCAR) in Boulder, Colorado, and the University of Texas at Tyler, the location of the GLOBE International Division Office; and Environment Tobago. Alumni from Trinidad and Tobago were also present.

The Opening Ceremony also featured Brother Resistance, (Lutalo Masimba), a leading Trinidad and Tobago Rapso Artiste and the President of the Trinbago Unified Calypsonians Organisation (TUCO) singing his popular environment composition "Mother Earth" and Miss Jerisha Regis, a 12-year old sixth grade student of Corpus Christi College and winner of the Junior Trinidad and Tobago Environment Secondary Level 2010 ECO Song Competition, who provided the musical interlude at Contest. Jerisha is the writer of her winning song, "Life Is Give and Take" and has been singing from age four (for 8 years!). 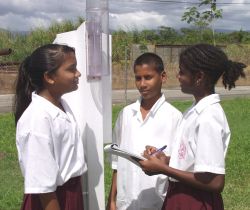 This project is history in the making, since for the first time in GLOBE training, two new aspects, Emergency Care and Disaster Preparedness, will be piloted. Mr. Henry Saunders, former MoE Curriculum Coordinator and GLOBE Country Coordinator for Trinidad and Tobago first recommended that these two areas be included in GLOBE training at the 2010 GLOBE Partners Conference in Calgary, Alberta, Canada, in July 2010, and was encouraged to pilot his new model.

GLOBE students have worked hard on their community-based project, reporting 38,291 measurements to the GLOBE International Database for use in their research since 1996. Trinidad and Tobago has been involved in several innovative projects over the past three years. In 2006, The GLOBE Program was introduced to the Youth Training Centre (YTC), a juvenile correction institute.

A GLOBE site was commissioned in June 2006, with some of the youth taking daily GLOBE measurements. Despite the literacy and numeracy challenges, the project was well received by the "captive" audience. The project experienced some challenges in its early implementation when the same participants were involved in other skills development training projects requiring them to attend training out of the YTC at the same time they should be collecting GLOBE data at the Centre. 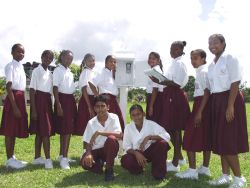 An important initiative taken by the GLOBE team in Trinidad and Tobago involved training students alongside their teachers in 2000, and the development of a self-sustaining model for GLOBE Program school implementation. Brazil Secondary School (BSS), currently collecting the most data for use in their research of any GLOBE School in Trinidad and Tobago, has successfully piloted this model. This GLOBE school has also adopted Madrass Government Primary School and will be providing GLOBE support as that school becomes more involved in the GLOBE Program. Additional noteworthy accomplishments from BSS include being the first school in Trinidad and Tobago to introduce GLOBE to a pre-school, a home for the aged, and foreign schools such as Durham's Friends School in North Carolina, USA and Harris City Academy in Crystal Palace, London, England. GLOBE participants at the school also helped implement GLOBE at Holy Cross College. 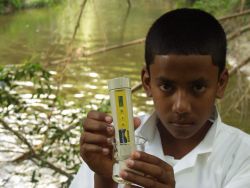 Brazil Secondary School represented Trinidad & Tobago at the 2008 GLOBE Learning Expedition (GLE) in Cape Town, South Africa, and has been highlighted in local newspapers, radio, television, and on the internet for their outstanding research projects. The school has participated in numerous additional GLOBE activities, including the Surface Temperature Field Campaign, GLOBE at Night, and the GLOBE Annual Partner Meeting and Professional Development Workshop in Calgary, Alberta, Canada. In September 2010, BSS received a letter of commendation from the office of former Vice President of the United States, Al Gore, commending the school on its efforts to make a difference in Trinidad and Tobago and the environment.

Another bold initiative by Trinidad and Tobago is the GLOBE and Elderly project where GLOBE students are required to interact with clients from a Home for the Aged that is involved in the GLOBE Program. The elderly clients meet and discuss GLOBE and other social matters with the GLOBE students thus helping to bridge the age divide. A baseline study for this project is currently underway. 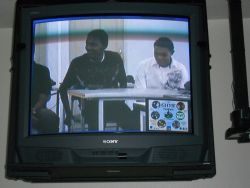 The next GPTT major initiative is the GLOBE World of Work Project (GPTTWOW) in which GLOBE students will be afforded opportunities to work during the school vacation in Business Enterprises that provide hands-on training in areas related to their school curriculum. This project will be launched in early 2011.

The preliminary work for the baseline study for the GLOBE ECCE project has almost been completed. ECCE teachers were trained at the recent workshop, and the Elementary GLOBE Resource materials are in the process of being customized to meet the needs of local students.

Finally, the National Environment Baseline Study will be conducted in early 2011. This project is designed to determine the level of environmental consciousness, in terms of knowledge, attitudes, and actions among the target group students and teachers in Trinidad and Tobago. The overall goal of Trinidad and Tobago expects that this research project will be replicated in the other 110 GLOBE countries in order to obtain a global picture of this concern.

Congratulations to the Ministry of Education, the entire GLOBE Team, and all community members and sponsors who have ensured that students of all ages in Trinidad and Tobago have been provided with hands-on opportunities to take part in GLOBE research projects and related activities.