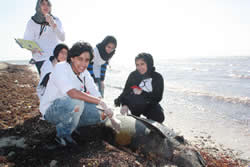 On 3-4 February 2011, over 40 Bahraini students from 17 secondary girls' schools came together on Al Jazair Beach to attend the first GLOBE Girls' Science Camp hosted by the GLOBE Team in Bahrain. The camp was a great success and marks a new accomplishment for GLOBE students, teachers, and the scientific community in Bahrain. Since joining the GLOBE community in 2001 with one school and 15 students, Bahrain has expanded its GLOBE network to include 49 public and three private schools. Although Bahrain is only 760 square km in size, the country boasts 161 km of coastline and remains deeply impacted by its surrounding marine life. 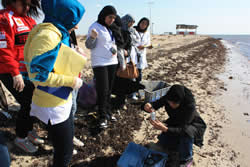 From their location at a permanent scout camp operated by Bahrain's Ministry of Education, students spent two days actively exploring the beach and learning about their environment through a number of interactive, hands-on workshops. Using GLOBE Protocols to identify and classify land and marine organisms, students became aware of the myriad of life forms, both land, and marine, in the Kingdom of Bahrain and gained invaluable scientific skills and expertise. The opening ceremony of the camp began with an agenda of peace followed by an opening speech by GLOBE Country Coordinator Mrs. Wafa Mubarraq Bin Daynna. Mr. Nasser Mohammed Al Shaikh, Assistant Undersecretary for General and Technical Education at the Ministry of Education, and Embassy Public Affairs Officer Rachael Graaf both provided an opening address and discussed further cooperation between the GLOBE Program and Bahrain's Ministry of Education.

"Through data collection and analysis, students were able to approach the environment interactively, learning about the importance of scientific technique and ways in which they can positively impact the environment. The camp also provided a place where students personally realized the negative impact of pollution and climate change and the need for environmental protection," stated Mrs. Wafa Mubarraq Bin Daynna. 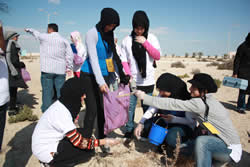 In addition to collecting their own data, students attended a number of workshops and seminars. In one of the training workshops led by Mr. Hashim Saeed, an expert on marine management, students learned about marine life in Bahrain. The workshop included a beach survey of coastal waste and pollution, and students studied the anatomy of crabs from different coasts in Bahrain. They were taught to recognize the difference between a clean sea crab and one that has been exposed to pollution, allowing them to discover the impact of pollution in a close and personally relevant way. Other activities included a workshop on desert plants, hosted by Dr. Nadmi Khalil, an expert in the Public Commission for the Protection of Marine Resources, Environment, and Wildlife, who also provided a seminar on the role of women in the preservation of the environment. 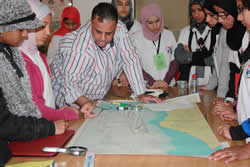 Another special session was led by Dr. Asmaa Aba Hussain, an environmental expert and one of Bahrain's pioneering women in scientific research, who provided a presentation on the many ecological studies that are currently being conducted in Bahrain. Dr. Hussain is a Professor of Environmental Geology at the Arabian Gulf University, and has been actively involved in more than two dozen scientific research projects for which she has received multiple awards, including His Highness Sheikh Rashid Bin Hemmed Al Noaimi's award for Scientific Research, Ajman, UAE, 2005, for her project, "Climate Change in the GCC Countries and Policies for Response." 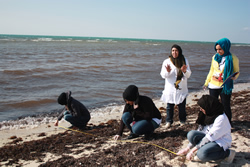 Altogether the Bahraini Girls' Science Camp provided a remarkable fusion of hands-on experience and educational workshops; students were able to cultivate a new awareness of their environment and apply it to real scientific research. Congratulations to Bahrain for their impressive work to build collaborations between students, teachers, and scientists through the GLOBE Program!