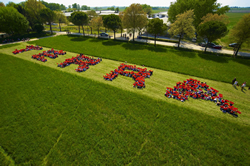 Sixteen years ago, on Earth Day, 22 April 1995, the GLOBE program was launched. In 2011, the international GLOBE network has grown to include 111 participating countries, with each country implementing GLOBE into local schools and communities. Now there are more than 56,000 GLOBE-trained teachers from over 24,000 schools; these teachers have inspired and encouraged more than 1.5 million students to participate as citizen-scientists in the GLOBE network, contributing more than 22 million measurements to the GLOBE database. The great success of the program is due to each and every student, teacher, school, trainer, coordinator, and community member who have come together to increase awareness of the Earth, our interaction with it, and to directly contribute to our scientific knowledge through a shared network of environmental observations and inquiry-based science projects.

For GLOBE, Earth Day is always a special day, marking both the anniversary of the program and a time when the entire international community acknowledges our planet. Thank you to all who participated in Earth Day celebrations– below are a few highlights from GLOBE Schools throughout the world. 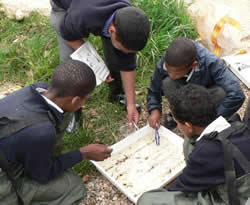 Although George, a city in the Western Cape of Africa, has recently been in the grip of the worst drought in 30 years, the local water resource is still being polluted. Students from 14 GLOBE schools investigated this pollution in conjunction with the River Health program. This project lead to the inception of a biomonitoring project, as well as poster presentations at various schools during Earth week. The events received national media coverage, resulting in the opportunity for students to present their findings to local government officials on Earth Day. In collaboration with the Works for Water project, students and teachers also held a cleanup event to clear the Berg River of invasive alien plant species. The Invasive Alien Plant Species Protocol, in collaboration with the Seasons and Biomes project, was also launched at a national teacher conference where students presented their research to the national curriculum advisors. This was an engaging experience for the students and, with the participation of many African countries including Namibia, Botswana, Lesotho and Malawi, a good opportunity for integration into the national curriculum. 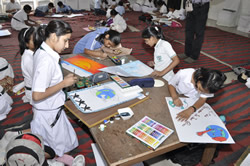 Asia and the Pacific

A series of activities was organized amongst GLOBE schools in India to celebrate Earth Day 2011, beginning with a GLOBE Teacher Training Workshop held in New Delhi from 18-20 April 2011. Twenty-nine teachers from 27 schools attended this workshop to learn the implementation process of basic GLOBE protocols. On 21 April 2011, Delhi Public School organized various competitions and other activities in collaboration with Heart Care Foundation of India to celebrate Earth Day. More than 400 students from 15 Delhi schools took part in the competitions and a "Walk for Mother Earth," a symbolic walk one half kilometer long, with each participant carrying a sign advertising a different environmental protection slogan. Activities also included a special assembly during which an oath to protect the Earth was taken and various plays and songs were performed by the students. All the activities were focused around climate research and prizes were awarded to the winners in each competition, some of which included poetry recitation and poster creation. On 22-23 April 2011, a GLOBE orientation program was organized to introduce features of the GLOBE program to new GLOBE Teachers in Chandigarh, India. 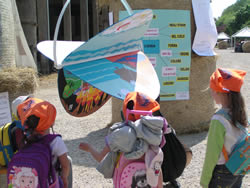 GLOBE Schools in the Udine province of Northern Italy celebrated Earth Day on 19 April 2011. Organized by ISIS Malignani in Cervignano del Friuli, together with a network of primary and secondary schools and a number of local institutional bodies, over 650 students, teachers, and volunteers gathered to learn, eat, play, and celebrate "Giornata della Terra" (Italian for Earth Day). In order to have enough space for all the workshops conducted and participants that attended, the event was held in Azienda Agricola Marianis in Palazzolo dello Stella (Udine), a 600-hectar farm owned and managed by Region Friuli. 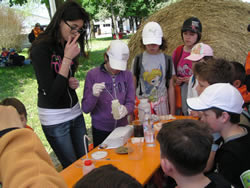 Following a community lunch comprised of pasta with meat sauce, locally produced yogurt, and a refreshing apple, all children and students gathered in a big hay paddock for the land-art finale. After arranging themselves to spell out the word ‘Terra', at a given signal, they all raised their orange foulards printed with the GLOBE and "Giornata della Terra" 2011 banners. 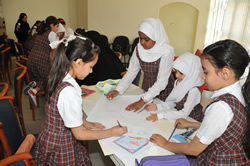 Near East and North Africa

In the Kingdom of Bahrain, GLOBE students from several primary schools focused on marine life and the vital role it plays in their country. On 19-20 April 2011, students gathered at the Arts Center at the Bahrain National Museum to attend events hosted by the Public Commission for the Protection of Marine Resources, Environment, and Wildlife Affairs. Students first learned about the history of water in the Kingdom and its impact on their own environment. Expanding their awareness of the ocean's great biodiversity, students viewed pictures of marine animals and learned about their habits and unique place in the ocean's ecosystem.

In Pakistan, one GLOBE school commemorated Earth Day by planning and hosting an event to spread awareness and appreciation for the Earth's environment. At the beginning of the academic year, OPF Girls College launched an intensive Earth awareness campaign, and all the different sections of the college were given different targets to accomplish regarding Earth's environment. As part of the campaign a special Earth Day celebration was held on 22 April 2011. GLOBE students participated in many different activities, all highlighting the importance of the Earth and of a healthy environment for us and for future generations. There were also several competitions for students, including debate, poetry writing, poster, essays, skits, and tableau. Prizes were awarded later that day in a special ceremony during an arts and science exhibition. One of the highlights of the day included the planting of a tree in the OPF Girls College with a promise to repair and replenish the Earth and to keep the environment green. 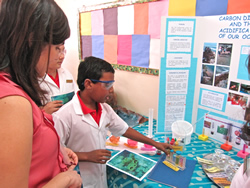 Latin America and the Caribbean

At the Notre Dame School in Santo Domingo, Dominican Republic, GLOBE students celebrated Earth Day with a Science Fair. As the fair was devoted to the international year of the forest, students presented scientific research on the general theme of forests they had conducted using GLOBE Protocols.

Activities and presentations at the fair drew attention to general themes as well as those specific to the region. Subjects included the reintegration of soils agro-ecological methods, the search for the best scientific method to measure the fertility of the soil, ways to promote the use of the trees in the forest without altering its life cycle, and the benefits of eco-friendly housing. Other projects explored water of the Valdesia dam that feeds the city of Santo Domingo, the benefits of the Moringa Tree, rate of recovery from the forest fire in the Central Mountain range, and the information regarding the Mountain National Park System.

For Earth Day, staff members at GLOBE Program Office in Boulder, Colorado, convened in historic Chautauqua Park for a Picnic for the Planet. Picnic for the Planet 2011, organized within the Nature Conservancy Communities, was a worldwide event, with picnics held in over 500 cities. 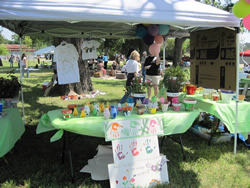 For the camp, the Annual Earth Day event is an important day to bring together local residents and to promote a better knowledge of natural resource conservation, renewable resource management, conservation of wildlife, and related matters. Participants made cloud observations and visited several of the GLOBE study sites located on the property. This year attendance reached nearly 1,000 people as dozens of families came out to Camp Tyler for the day to enjoy the beautiful natural resources in East Texas. Hosted by a collaboration of organizations, businesses, churches and youth groups, the camp held over 25 booth sponsors offering activities, information and services reflecting Earth stewardship. As in previous years the event was a great success and plans are already underway for the next Earth Day event, April 2012.

The GLOBE community celebrated this important day in a variety of ways. Thank you for marking this special occasion with activities that remind us to care for the Earth, as it provides so much for us. Happy Earth Day and Happy 16th Anniversary to the GLOBE Program!

Read more about Picnic for the Planet.