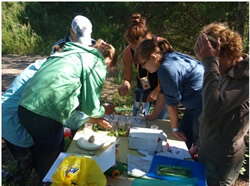 Educating young people and bringing them closer to science is what the Estonia GLOBE Games is all about. This year, the games were held in Jõulumäe, Pärnu County, Estonia. Approximately 150 students, teachers and instructors from 26 Estonian schools, as well as guests from the Czech Republic, participated in the four-day event. This is the 14th year of the games, which occur every August.

Students had the chance to examine the natural features of the surrounding area in Jõulumäe while utilizing GLOBE-based investigation methods and resources. Chief organizer and GLOBE alumna Laura Altin stated that the main focus of the event is "to get young people excited about and closer to science." Students performed unique experiments and took critical measurements independently as instructors from the University of Tartu and the Estonian University of Life Sciences explained the importance of their findings. 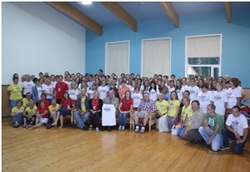 The opening GLOBE Games ceremony was conducted by GLOBE Teacher Arvet Silk; Kaido Reivelt, GLOBE Estonia Country Coordinator; Erli Aasamets, Chairman of Saarde Parish Council; and GLOBE Alumnus Tomas Tunkl from the Czech Republic. In addition, GLOBE Games teachers introduced the activities and the tools needed to participate. The following day, students approached their first challenge in a nearby forest, exercising their knowledge of Atmosphere, Land Cover, Soil or Hydrology learned the day before to successfully complete their assigned tasks. In addition to the introduction from instructors, students expressed that the information learned in their natural science classes was very useful in carrying out these tasks. Many students also noted the challenges were practical and could be applied in real life situations.

In one of the more exciting challenges, students had to navigate a forest to find their research site using a map and landmarks ––a vital skill that will be used in the future. For example, students investigating water had to find the mentioned reservoirs within the forest. In another activity, students investigated water utilizing GLOBE Hydrology Protocols. Participants compared two reservoirs to determine varying qualities and why differences occur. Students presented their GLOBE data measurements, observations they made during the expedition to the forest and the conclusions they made based on what they gathered. Instructors, organizers from Kilingi-Nõmme Gymnasium and the top performing participants were acknowledged for their participation in the program. 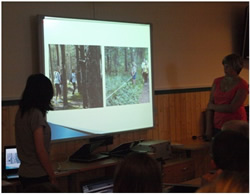 The 2011 GLOBE Games received national media coverage on the television show "Suvel võib". U.S. Ambassador Michael C. Polt and Brian Frere, Economic Officer of the U.S. Embassy also visited the GLOBE Games event and observed an overwhelming level of enthusiasm in participants. Polt stated that he had never seen "such an interest and passion for science" as he saw in the students of Estonia. "Older students teach younger ones and accurate data measurements matter to everybody," said Polt. During an interview, Ambassador Polt asserted, "the world is getting smaller, not larger and these young people should take every opportunity to develop and remember how important science is to human progress."

This year's 14th annual 2011 GLOBE Games event was organized by students and teachers from Kilingi-Nõmme Gymnasium.

Read GLOBE Stars about past GLOBE Games in Estonia: