GLOBE Israel Utilizes Resources to Connect Culture to the Environment 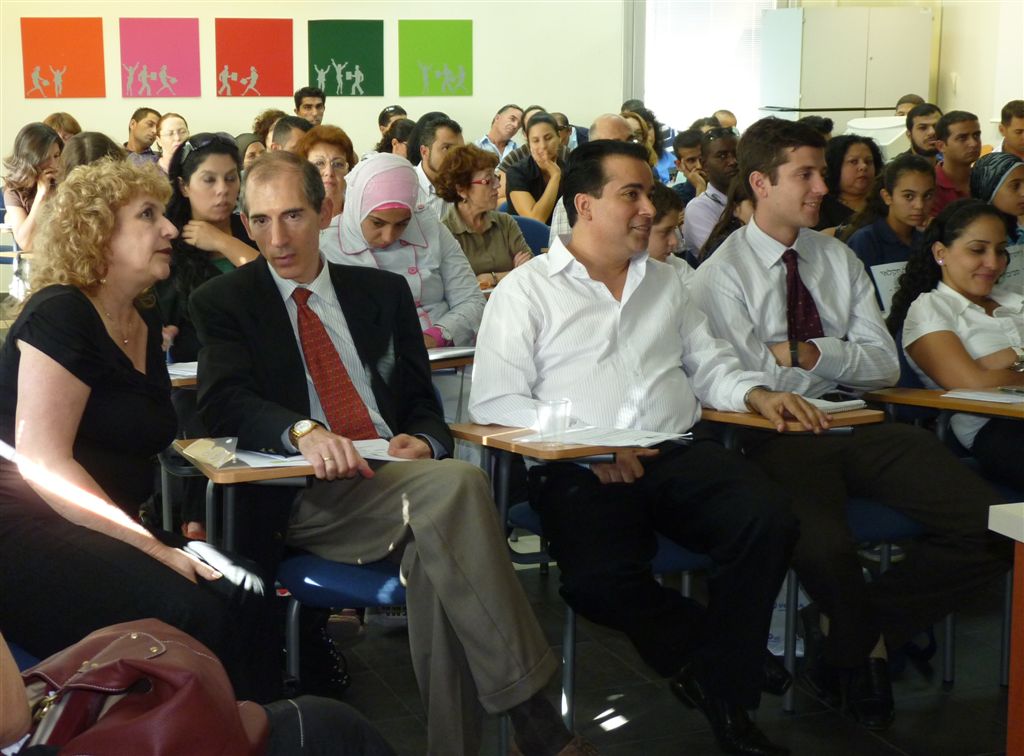 GLOBE is implemented in more than 97 schools in Israel, where some students have developed collaborations with other Israeli schools and abroad. There are currently four active GLOBE school sectors, with 46 schools in the Jewish Sector, 51 schools in the Arab Sector, 12 in the Bedouin Sector and 3 in the Druze Sector. The GLOBE Teachers in all four of these sectors use methodological guides to implement GLOBE Protocols, which target problem-based learning applications such as how to protect nature against regular human activity. These teachers focus their implementation on GLOBE Atmosphere, Hydrology, and Phenology Protocols, and also tie these topics to relevant climate research activities. Country Coordinator Mr. Farid Hamdan stated that "GLOBE improves student understanding of science because it involves taking measurements, analyzing data, and participating in research collaboration with scientists. GLOBE students also contribute data for international scientists to utilize in their research."

While Jewish schools in Israel commonly integrate GLOBE Protocols related to Climate into scientific courses of study, such as the Atmosphere and Phenology Protocols, a few schools have also found ways to incorporate GLOBE into disciplines such as geography. According to Mr. Hamdan, "schools that are technologically equipped for GLOBE support can easily facilitate conceptual development, process skills, and scientific comprehension." 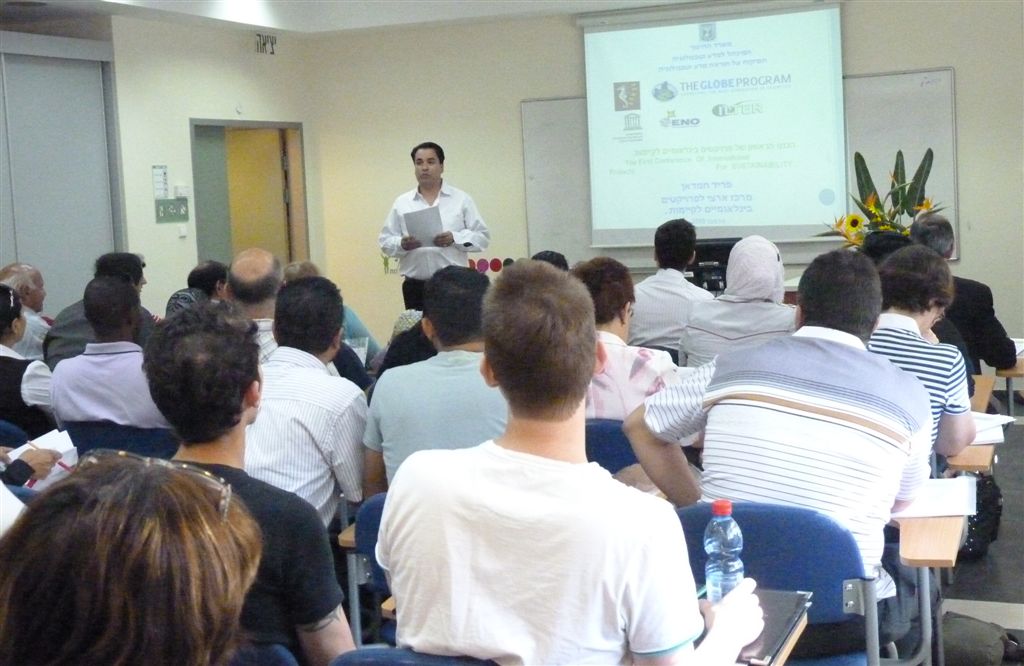 The Arab and the Druze sectors implement GLOBE as an elective program for a select group of students. Art, Technology, English, Geography, Math, and Science Teachers all use GLOBE to support their respective areas. Many schools lack the equipment necessary to enter data measurements into the GLOBE database daily, but they are still highly motivated. Arab GLOBE students in this situation, particularly in elementary schools, focus more on developing their critical thinking skills and literacy. They are encouraged to envision solutions to systems that perpetuate harmful actions to the environment. This can be accomplished through phenology activities, comprehensive field studies and approaches to teaching that draw connections between cultural and environmental issues. For instance, determining a bio indicator plant provides important clues about the health of the environment and climate patterns.

El-Sayed School, a Bedouin GLOBE School near Beer Sheva in the Negev Desert located in the southern part of Israel, an area undeclared by Israel Government, is a public school is recognized by the Israeli Ministry of Education. Even though there is no electricity, they use a generator several times a day to connect to the Internet so that students can be a part of the GLOBE Community, submit their data to the GLOBE Database, participate in environmentally enlightening projects, and develop ideas about protecting the environment, and conserving energy and water. View this NASA video. 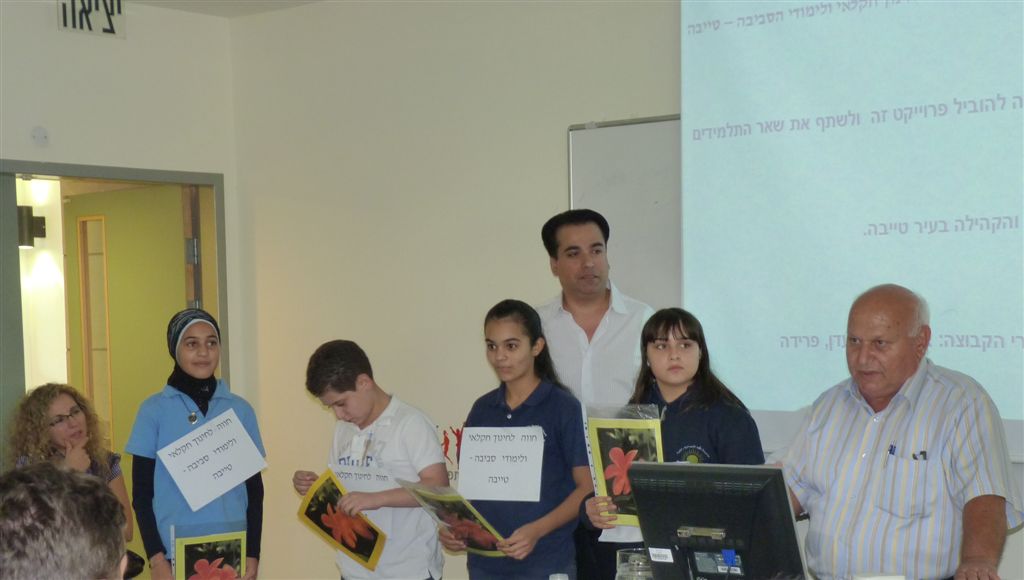 Israeli GLOBE students and their teachers took part in many activities this year including the GLOBE Israel Annual Meeting, GLOBE Green Day, and the first International Projects of Sustainability conference. Students were also presented with certificates from the Ministry of Education for displaying excellence in GLOBE participation throughout the year. The 2010 GLOBE Annual Meeting was held at Neot Kdumim, a national natural reserve near Jerusalem, on 31 May 2010. Their next annual meeting will be held on 14 June 2011 at Weizmann Institute, in Rehovot, one of the most advanced scientific institutes in Israel. During the meeting, representative students from GLOBE Schools throughout Israel will participate in the country-wide administered GLOBE National Quiz. Representatives from the U.S. Embassy in Tel Aviv, Israel, attend this GLOBE Israel Annual Meeting each year.

Ninety-seven schools throughout the country attended GLOBE Green Day, where 25 ecological activities were designed for students to have fun while learning about science. Schools arrived at staggered times throughout the morning between 9:00 a.m.-12:00 p.m. and participated at least in 3 to 4 of the activities, for 25 minutes at each station. The meeting included a general assembly meeting where four GLOBE Schools in Israel were awarded for entering the most data measurements into the GLOBE database for use in their research activities. The event ended with a GLOBE Quiz, in which each school sent two representatives from different grade levels to participate in the qualifying stage. The classroom event followed, where each student answered five GLOBE-related questions in a short test assigned according to grade level. Questions were translated into both Hebrew and Arabic. Within 15 minutes, the top scoring students were selected to participate in the next level. Each student randomly selected a letter and then the judge asked the student to answer orally within 20 seconds of the question. Most questions pertained to GLOBE Protocols. Within 40 minutes, there were three winners! 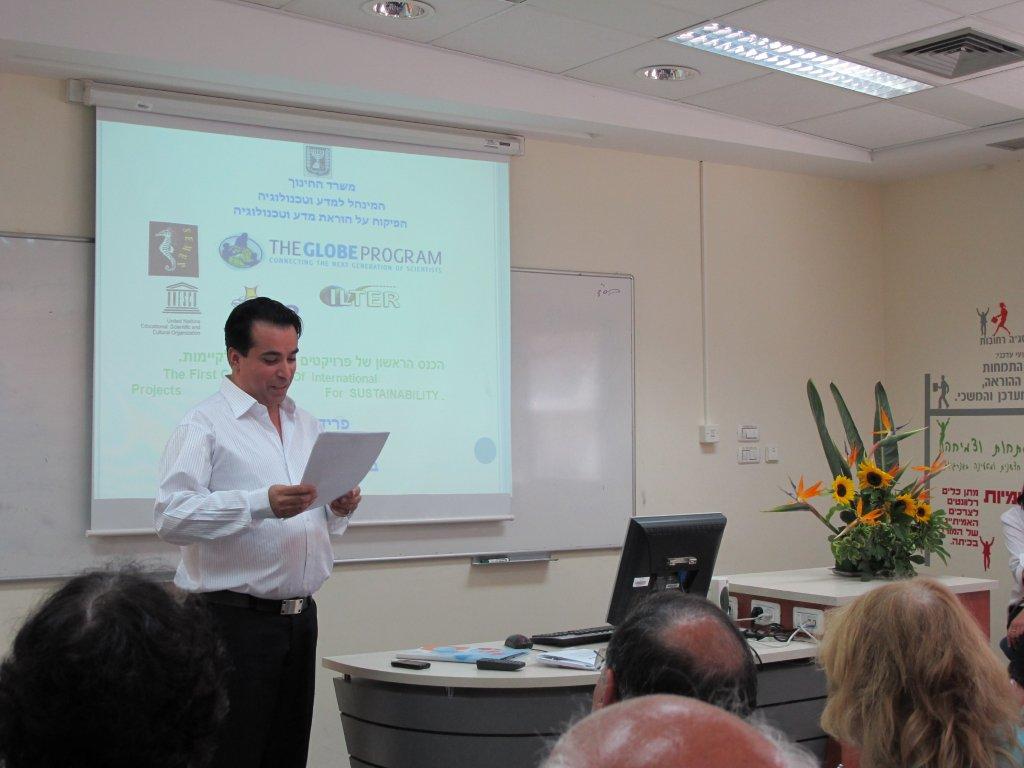 According to Mr. Hamdan, "one of the challenges facing Israeli society today is the understanding of the connection between social and ecological systems. The ever-changing nature of the environment has created a need for scientists in Israel to receive detailed data of weather events and to monitor social and ecological change, creating an opportunity to connect school students from Negev with the frontline of modern research science. The cooperation developed between school communities serves as a peace bridge between different social communities of Israel and in neighboring areas of the Middle East." This year, a cooperation was established between Adam Sviva Midbar (ASAM), a name that when translated means "man and environment in the desert" in Hebrew, and the GLOBE Program in Israel. The school's network serves as a research field for developing an educational program, aims to foster the mutual connection between ecological literacy, environmental activism and sense of place. Dr. Noa Avriel-Avniis, the coordinator of this unique project, and is cooperating very closely with Mr. Hamdan to ensure that GLOBE is an integral part of the project. Each Wednesday, teachers, school principals and supervisors participate in a computer-based workshop from their home, listening and learning from a diverse series of lectures, and comparing their GLOBE data.

The first International Projects for Sustainability conference was arranged by the Ministry of Education in Tel Aviv, Israel, on 8 November 2010. Supervisors, principals, and teachers participated in this event. Four programs, including GLOBE, were selected to be presented under the title, "Sustainability in Education." The main project, Environment Online (ENO), was presented by Dr. Carmella Baranga, ENO Israel Coordinator. ENO is a global virtual school for development that was launched by Finnish teachers in 2000. Today there are over 5,000 schools and 134 countries involved. ENO is administrated by ENO Programme Association in Joensuu, Finland. Representatives from the U.S. Embassy attended the meeting, and were receptive to learn about ENO, GLOBE and the SEMEP Project (by UNESCO). All of the projects will be expanded to additional Israeli schools in the Jewish, Arab, Bedouin and Druze sectors.

"Students come to school with preconceived beliefs and expectations about how things happen, based on past experiences, which enable them to make predictions about future events. They also possess a coherent vocabulary that is utilized in both everyday language and scientific study. A student's comprehension of word meaning is incorporated into conceptual structures that provide an adept understanding of the world from the student's point of view. Students hold ideas that were developed before and during their early school years, and these ideas are expanded by teachers and varying educational environments. Typically, students develop parallel but mutually exclusive explanations of scientific concepts, one for use in school and one for use in the "real world." GLOBE Students are capable of combining these concepts to create an applied base of scientific knowledge," summarized Mr. Hamdan.

Learn more about GLOBE in the Negev Desert:

Read about additional collaborations between GLOBE and ENO: