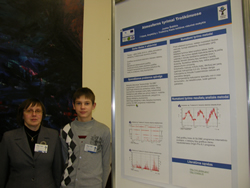 Justas Sidiskis, a 14-year-old Lithuanian student from the Troskunai K. Inciura Secondary school in the Anyksciai district, took second place in the national European Union Contest for Young Scientists. His 15-minute presentation, "Investigation of Atmospheric Studies in the Troskunai Area," was using GLOBE Atmosphere protocols. The main aim of the presentation was to analyze atmospheric studies by using GLOBE data collected from 2008 to 2010. A summary of the problem, research methodology, analysis, review of the results, and Justas's conclusions were all presented in his report. Justas encompassed his assessments using four points: 1) a graphic representation of the types of clouds of each month, 2) an analysis of the clouds' graphs, 3) an analysis of precipitation data, and 4) a comparison of changes of 2010 temperature data with previous years.

"I had not been interested in atmospheric studies before my teacher invited me to participate in the GLOBE Program," said Justas when asked about his interest in atmospheric science. "But when I began the project, I immediately became interested in it. I liked observing the clouds and deciding which type they were. I also enjoyed measuring precipitation, investigating pH, doing maximum, minimum, and current temperature readings, and doing Land Cover observations. I even increased my personal skills in drawing graphs using the computer. It was fascinating to analyze several years of data for the contest."

Justas made several conclusions from his research that provided a tremendous boost in his scientific education. Using data from previous years, he was able to make several deductions about the Troskanai area's weather patterns and temperature averages. "I am very happy to participate in the GLOBE Program because I improved my scientific understanding about my surroundings," said Justas.

Justas began participating in the GLOBE Program two years ago. "The contest was open for students from ages 14 to 20, so it was the first opportunity for Justas to participate," said GLOBE Country Coordinator Miglė Simanavičienė. Together with his teacher, Rasyte Gaidiene, and his classmates, he made observations and investigations in order to evaluate the area around his school regularly. "He is very enthusiastic and interested in environmental changes, scientific research, and assessment," said Ms. Simanavičienė.

The European Union Contest for Young Scientists is a science fair sponsored by the European Commission that began in 1989. The contest was set up to promote cooperation and interchange between young scientists from the different countries that make up the European Union. It provides an annual showcase of the best of European student scientific achievements. The contest is hosted annually in a different European country every year, the most recent being in Finland, Portugal, and France.

"We are proud of Justas's achievement," said Ms. Simanavičienė, "which was highly praised by judges of the contest." "The GLOBE Program is an excellent opportunity to express his strengths and to develop his skills in many types of environmental investigations. Also, Justas's achievements have inspired other students to look for new results and have encouraged their awareness of environmental education."

Lithuania was the 100th country to join the GLOBE Program on 3 October 2002 when U.S. Ambassador John Tefft and Lithuanian Minister of Science and Education Algirdas Monkevicius signed the GLOBE bilateral agreement in Vilnius. Since that time, 40 schools have participated in GLOBE in Lithuania. The GLOBE Program thanks all the GLOBE students and their teachers in Lithuania for their hard work and dedication to contribute 352,162 scientific measurements to the GLOBE Program international database, and congratulates Justas Sidiskis for his outstanding accomplishment at the European Union Contest for Young Scientists.

Learn about the European Union Contest for Young Scientists

Read more GLOBE Stars in the Europe and Eurasia region: