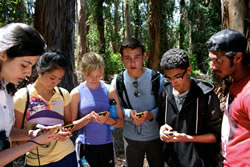 The Ocean for Life field study included a variety of activities led by Ms. Claire Fackler from NOAA's Office of National Marine Sanctuaries and many other NOAA staff. Students collected and compared GLOBE Hydrology and Atmosphere data from various locations along the Santa Barbara and Santa Cruz Island watershed. 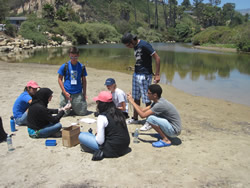 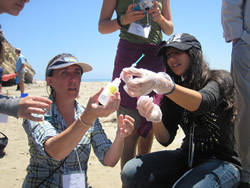 Through data collection and monitoring activities, students learned how to use a variety of scientific tools and conduct titrations for analyzing various Hydrology parameters that affect marine life, including Alkalinity, Dissolved Oxygen, pH, Water Temperature, and Water Transparency. In this photograph, students are engaged in water quality monitoring under the guidance of Dr. Moses. (Photo Courtesy of Alhasan Omar, Egypt, Ocean for Life 2011). 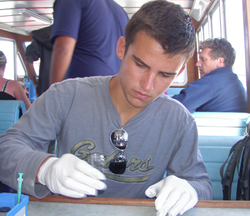 "I really enjoyed the hands-on process of testing seawater alkalinity," remarked Ocean for Life student Emiliano from Florida. "Learning about the importance of alkalinity as it relates to the ocean was a new and fascinating experience." In the accompanying photograph, Emiliano conducts GLOBE environmental monitoring aboard the Island Packers boat while returning from Santa Cruz Island. (Photo Courtesy of Ms. Claire Fackler, NOAA National Marine Sanctuaries). 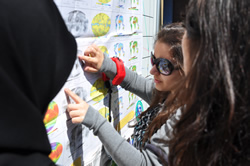 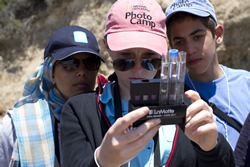 Brooke Liston, a member of SCUBAnauts International and U.S. participant of the 2011 Ocean for Life, said the experience, "Was a treat for me because I have collected tons of GLOBE data with SCUBAnauts International. I had the chance to compare the data from Florida Keys National Marine Sanctuary with the data from Channel Islands National Marine Sanctuary." Since her Ocean for Life experience, Brooke has continued to collect GLOBE data in the Gulf of Mexico while monitoring natural patch reefs with the Tarpon Springs Chapter of SCUBAnauts International. This photograph shows Brooke and other students from the United States and the Greater Middle East conducting water quality monitoring in the Arroyo Burro watershed. (Photo Courtesy of Mr. Jim Webb, National Geographic, Ocean for Life 2011). 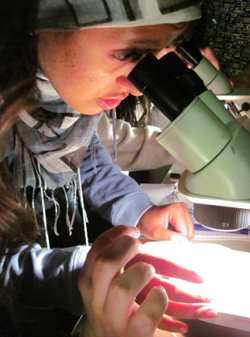 The field study presented students the chance to interact with and learn from a variety of scientists. Students were able to draw upon the knowledge they gained from these experiences during discussions with local ocean experts on issues such as ocean acidification and their effects on the unique marine ecosystems all the way down to the health of plankton, the base of the aquatic food chain. In this photograph, Amira from Egypt learns about the effects of ocean acidification. (Photo Courtesy of Ellie Burck, Michigan, Ocean for Life 2011). As a result of their experience with Ocean for Life, GLOBE Students from Bahrain observed that the salinity in the Gulf of Bahrain was much higher than that off the coast of California, while dissolved oxygen was lower, enabling them to draw conclusions about how processes such as evaporation influence these parameters. "It was a great experience for the Middle Eastern students to learn about the water quality in areas of the United States and compare the result with what they have in their country even though it was just a few readings." said Seddiqa Abbas Ghuloom.

Assisted by photographers from National Geographic and American University, participants took more than 54,000 photos and videos to document what they learned. The resulting photos and videos were developed into five youth media projects, which assist Ocean for Life participants in sharing what they have learned to promote ocean conservation and cultural understanding among their classmates, friends, families, and communities when they return back home. 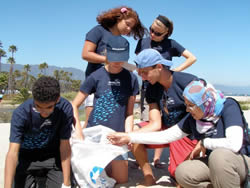 Reflecting on her experience, Brooke, a long-time member of SCUBAnauts International and U.S. participant of the 2011 program, said "Ocean for Life was a moving experience for me. I learned a lot about the ocean, other cultures and myself. It is now our mission to teach people ocean stewardship and cultural understanding." Participants took part in two beach clean-up projects as well as coastal plant restoration and took an oath to do whatever it takes to conserve the world's oceans as well as all naturally occurring water bodies. Natasha from Pakistan stated, "I have decided to start by cleaning the streams in Islamabad near my house." 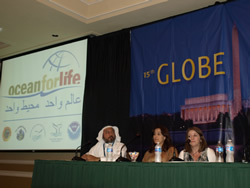 Participants at the 2011 GLOBE Annual Partner Meeting in Washington D.C. enjoyed a live-link-up to the GLOBE students of Ocean for Life, as both events happened concurrently. The live-link was coordinated by Qatar Foundation International and Cisco Systems in collaboration with the Marine Exchange of Southern California. On stage at the annual meeting, Mr. Rafat Jambi from Saudi Arabia, Mrs. Siham Salman and Mrs. Sawsan Abu Fakhreddine representing the Regional Help Desk Office in Lebanon (left to right) received live summaries of Ocean for Life field study events from Ms. Claire Fackler, Dr. Elizabeth Moses, Mrs. Seddiqa Abbas Ghuloom and several students from both the Near East-North Africa and North America regions. Discussions included inspirational student accounts of the week's fun and educational Ocean for Life experiences to come. 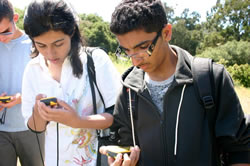 Read about the 2009 Near East-North Africa Ocean for Life Project.

Connect with the Ocean for Life community on Facebook.