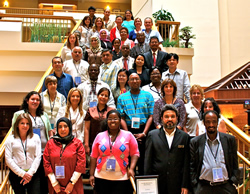 Regional meetings for the Africa, Asia-Pacific, Latin America-Caribbean, and Near East-North Africa GLOBE regions were held on 16 July 2011 prior to the 15th GLOBE Annual Meeting that took place in the Washington D.C. metropolitan area, in Bethesda, Maryland. More than 180 participants from 46 countries (including representatives from 26 U.S. states and the District of Columbia) took part in the Annual Meeting, and 23 countries participated in the preceding GLOBE Regional Meetings.

GLOBE Government Points of Contact, Country Coordinators and/or Embassy representatives who were able to attend the Regional Meeting gathered in their respective regional teams. Each region's GIAC Representative provided a summary of recent GIAC activities such as the GIAC+ meeting and other GPO priorities underway. Government Points of Contact and Country Coordinators of each attending country shared a report of GLOBE recruiting, training, mentoring and other activities within their country in the last six months. Group discussion of governance structures, as well as challenges and successes of implementation, were followed by a discussion on the status of existing committees and elections. Further topics of interests included discussion of expansion of the GLOBE scientist and alumni networks in the region. Additionally, each of the GLOBE Regional Help Desk Office representatives provided a summary of Regional Help Desk Office activities and described ways in which the office has supported the region. 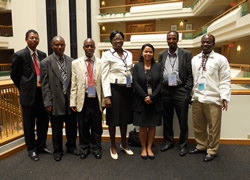 The GLOBE Africa Regional Meeting team consisted of representation from five GLOBE countries which included: Cameroon, Ethiopia, Madagascar, Nigeria, and South Africa. In addition to the common topics of discussion for all of the GLOBE regions, highlights of the meeting for this region are as follows: 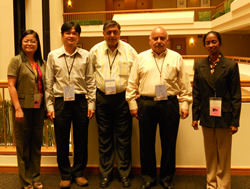 The GLOBE Asia-Pacific Regional Meeting team enjoyed representation from four countries which included: India, Philippines, Sri Lanka, and Thailand. In addition to the common topics of discussion for all of the GLOBE regions, highlights of the meeting for this region included: 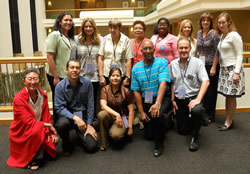 The GLOBE Latin America-Caribbean Regional Meeting consisted of representation from nine countries in the region, which included: Argentina, Bahamas, Costa Rica, Dominican Republic, Panama, Paraguay, Peru, Suriname, and Uruguay. The Highlights of the meeting are as follows: 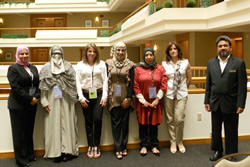 The GLOBE Near East-North Africa Regional Meeting had representation from four countries in the region. These countries included: Bahrain, Lebanon, Oman, and Saudi Arabia. Topics of discussion for this group were as follows:

Thank you to all participants from the Africa, Asia-Pacific, Latin America-Caribbean, and Near East-North Africa regions who attended, as well as those who presented at the meetings. We look forward to following the implementation of the exciting activities and events discussed in the coming year!