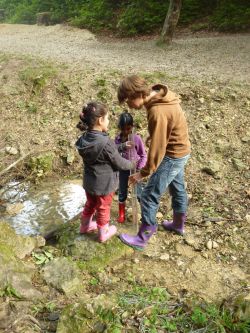 On 23 September 2010 a class of 8-year-old students from Primarschule Sali in Olten, Switzerland, teamed up with 19 and 20-year-old students from Kantonschule, another GLOBE School in Olten, to perform Hydrology Protocols on a small local river. The primary school class was led by GLOBE Teacher Patricia Gygli, who is also one of the Assistant GLOBE Country Coordinators for Switzerland. Students observed macroinvertebrates as bio-indicators and tested the chemical parameters of the water, such as pH, oxygen, and nitrate levels along with water transparency. While the investigation showed nitrate levels to be quite high, the students found a respectable amount of plecoptera larvae. This species is a bioindicator for very clean water due to their sensitivity to pollution. This contradictory aspect of the investigation was eagerly discussed, especially by the older students. The younger students were interested in learning if the river was ill, which led to more discussion. 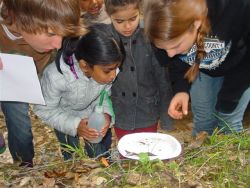 After their initial introduction, the students became acquainted and discussions became more friendly and relaxed. According to Ms. Juliette Vogel, Country Coordinator for GLOBE Switzerland, "It was very impressive to see that students of both age groups enjoyed working together. The younger students were very committed and worked in a professional manner by dressing in boots and wearing protective eyewear as they studied the river looking for macroinvertebrates. They turned stones over again and again, filling grids and studying the animals they found with a magnifying glass." 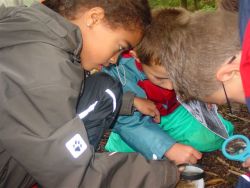 The students worked for several hours without rest along the river. Following their hard work, they discussed and compared results. The younger children were invited to collaborate on the chemical investigations. Using scientific equipment in order to experience the importance of working with serious precision, students were able to observe how the color changed on the test strips. While the older students found it challenging to explain the complexities of the investigations, the younger students understood the essential ideas. The results of the chemical analyses were that the river was "mid-ill," but there are still many sensitive macro-invertebrates living there. 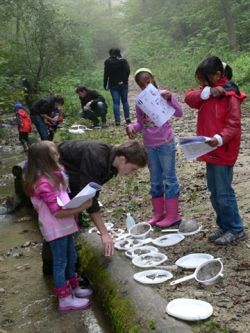 The students were disappointed when the activities came to a close, especially the younger ones who expressed they would like to repeat this research event as soon as possible. The common research and field experience joined the two groups together very quickly and deeply. Following the hydrology activities, all the students sang a song that the younger pupils are used to singing each day at school. Ms. Vogel commented, "This pilot project was good practice and promoted communication and social competencies in science education for high school as well as primary levels. We were astonished to see how the dialogue between the two age groups worked so well."

As a follow-up, one the students, under the direction of Kantonschule, provided a write-up of their observations and results for The Oltner Tagblatt, a regional newspaper. The article was published on 23 Oct. 2010.