The Tree Ring Project is a two-year study that uses tree rings in order to determine an environment's climate in any given year. The project, organized by GLOBE Country Coordinators Mr. Karl Torstein Hetland (Norway), Mrs. Diana Garasic (Croatia), and Tree Ring Project Manager and Assistant Country Coordinator Mrs. Ilona Krpcová (Czech Republic), is a collaboration between 24 schools from their three countries. From 5 – 8 October 2011, the first of three workshops involved in the project took place in Baška, Croatia. Two teachers and the principal from each school took part in the event, bringing the grand total of this successful endeavor to 85 participants.

The Tree Ring Project operates in conjunction with the GLOBE Student Climate Research Campaign, and encourages students to carry out their own research projects working alongside scientists from the three participating countries. To encourage student exchange activities, "Twin Schools" were formed so that each school could partner with a school from a different country and work together to compare their findings. The Twin Schools developed research questions, discussed possible climate projects specific to their areas, and decided how they will collaborate throughout the 2012 school year. 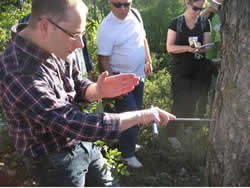 The overarching theme of the training event focused on Dendrochronology, the science of pinpointing the exact year of a tree ring based on environmental changes that occur in certain years. Together, Dr. Andreas J. Kirchhefer from Norway and Dr. Vladimir Kušan from Croatia explained the different responses trees have to climate change and how analyzing this information helps them to understand climate patterns over past years. The scientists also explained three essential factors in choosing a tree to study: (1) to determine the age of the tree; (2) to examine the tree's position in stand; and (3) to examine the tree's condition and assess how much damage the tree has sustained.

During the field training, Drs. Kirchhefer and Kušan guided the teachers in collecting tree core samples, preparing the samples, and storing them for further analysis. Examples were shown of good and bad tree core samples, as well as tree stumps and trees to be avoided to help teachers sharpen their understanding of dendroclimatology and dendrochronology before sharing their experience with their students.  In addition, the amount of tree damage was assessed, ranging from 0 - 100%, and teachers practiced identifying factors that affect the growth and well-being of trees in those locations, such as industry, traffic, waste disposals, farms, etc.

Dr. Elena Sparrow, GLOBE U.S. Partner from Fairbanks, Alaska, and Seasons and BiomesESSP project investigator, is extremely involved in the Tree Ring Project. She and Ms. Martha Kopplin, Seasons and Biomes team member, shared their knowledge of the student inquiry method, carbon storage and field measurements, and posed research questions with students. According to one of the teachers, "this workshop really showed us how we can get our students involved in individual and collaborative climate-related research."

After students identify their own research projects, the Twin Schools will collaborate with each other during the school year through the use of various internet media avenues. The overall goals are to provide the students with a chance to get to know each other, share information about their countries, cultures, and environments through comparison of data, and to practice English. Some twin schools anticipate using GLOBE Protocols for measuring clouds, precipitation, and temperature in order to assist them in their research. Other GLOBE protocols that will be used include those in the Hydrology and Phenology investigation areas. Other Twin Schools have decided to study the migratory patterns of birds as well as organize GLOBE games to bring these international students together as often as possible. 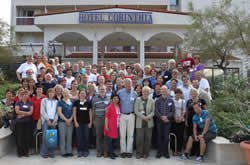 When the GLOBE Program first began in 1995, Croatia, the Czech Republic, and Norway were some of the first to become GLOBE countries. Since then, all three countries have been very active with the program and have continually recruited more schools. Today there are 355 active GLOBE schools between the three countries. According to Mr. Hetland, "The workshop was a great success and the participants were enthusiastic about the Tree Ring Project and the international collaboration involved." Both Dr. Sparrow and Ms. Kopplin were impressed with the hard work of the teachers and the overall outcome of the event. Ms. Kopplin stated that "if science has been called a universal language, science education must be even more so. We were impressed at the level of dedication on the part of the teachers and how well the paired schools of the three different countries communicated across language barriers to develop their plans."

The three nations will meet again in October of 2012 in the Czech Republic and again in September of 2013 in Norway, to present students' research projects and reports from schools on the development of this international partnership.