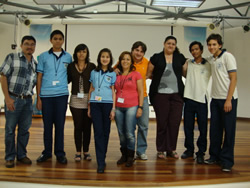 The Omar Dengo Foundation, coordinating institution for the GLOBE Program in Costa Rica, organized the first Scientific Environmentalism Festival From 9-10 November 2011 at its facilities in San Jose. This event was held to allow students the opportunity to present the results of various scientific projects they participated in through the Innov@ Institute of the Omar Dengo Foundation in 2011. GLOBE projects were built on field research investigation and all hold a common theme of uncovering environmental problems related to hydrology in local communities. This common theme gave participants the opportunity to interact with other students, teachers, and scientists in Costa Rica. This is achieved through the development of GLOBE Hydrology protocols, Watershed Dynamics Project materials, and the application of biological monitoring methods. This work receives the support of national scientists in Costa Rica. 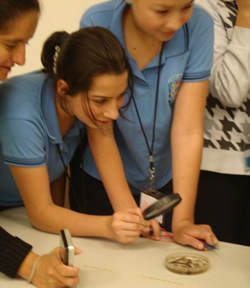 Two students from each institution had the opportunity to present their research to the public. Many projects focused on the use of aquatic macroinvertebrates to monitor rivers and streams in their communities. The Liceo de Paraíso and the school Gregorio José Ramírez School had the top scoring exhibits and students from these institutions each received a scholarship to participate in the First Latin American Congress on Aquatic Macroinvertebrates, which was held from 6-11 February 2012 at the University of Costa Rica. The criteria taken into account to provide scholarships to GLOBE schools were 1) consideration of all steps of the scientific method, 2) the use of technology resources, 3) efficient use of time during the investigation and 3) presentation of information. 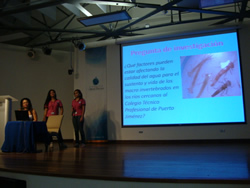 Because GLOBE is developed jointly by the Omar Dengo Foundation and the Ministry of Education, the participation of the schools' representatives was entirely covered by GLOBE Costa Rica, which ensured the monitoring of student research in 2012 to refine methodologies and seek to resolve unanswered questions. This was a great opportunity for GLOBE students to share their research in a scientific environment. Sharing their experiences ensured adequate feedback for local research projects and the establishment of partnerships between GLOBE schools in Costa Rica for future research. "We hope that these experiences will help students prepare to share their research with the GLOBE community during the next GLOBE Learning Expedition" said Mr. Quiros. This was a wonderful experience for Costa Rica that will hopefully extend to other GLOBE countries in Latin America, the Caribbean, and the world.

Read other GLOBE Stars about activities in Costa Rica: