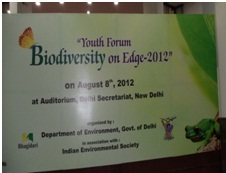 On 8 August 2012, more than 130 GLOBE students and teachers in Delhi, India, came together for the "Biodiversity on Edge 2012" Youth Forum, sponsored by the Indian Environmental Society (IES). Also in attendance were members of the GLOBE Asia-Pacific Regional Help Desk Office and the Department of Environment, Government of NCT (National Capital Territory) Delhi. This event gave Delhi students the opportunity to present various research projects pertaining to biodiversity and its conservation. It also encouraged students to promote awareness by sharing their findings with other young people around the world.

The event began with an opening song called "Friends of the Environment," led by GLOBE students from Hillwoods Academy. The song emphasized the need to "clean the Earth, heal the Earth, and to keep the Earth green." Street plays by various GLOBE students were also presented, highlighting biodiversity, the variety of life we have in our environment, as a natural treasure. Dr. Desh Bandhu, contact for the GLOBE Asia-Pacific Regional Help Desk Office, gave introductory remarks including an overview of the GLOBE Program. Dr. Bandhu stated that, "GLOBE focuses on collaborations among students, teachers, educators, scientists, government officials, and others around the world." 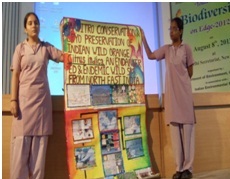 Dr. Gulshan Wadhwa, Director of the Department of Biotechnology, Government of NCT of Delhi, stressed the need for biological diversity in supporting human life, and stated that it is central to the relationship between man and nature. Delhi's GLOBE students were encouraged to prepare short and long-term student projects on Biodiversity using GLOBE protocols, for the opportunity to present such projects at the 2012 Youth Forum. Mr. B. M. S. Rathore, Joint Secretary of the Ministry of Environment and Forests, highlighted a connection between biodiversity and India's sustainable future, stating that "we literally need to conserve biodiversity like our lives depend on it." 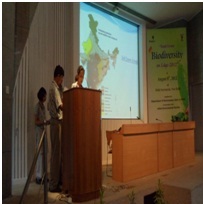 Mr. Ramesh Jain, Senior Program Officer for the Public Affairs Section in the U.S. Embassy in New Delhi, provided an overview of the GLOBE Program in India, and expounded on GLOBE accomplishments in the northern states of Uttar Pradesh and Bihar. Attendees also had the opportunity to hear Dr. Alka Sharma's presentation on biotechnology. A scientist for the Department of Biotechnology, Govt. of NCT of Delhi, Dr. Sharma focused on how one can apply biotechnology in various fields. Biotechnology is very useful, especially in the areas of food production, industrial supplies, energy production, and environment production.

At the conclusion of the 2012 Biodiversity Youth Forum, Dr. B. C. Sabata, Senior Scientific Officer in the Department of Environment discussed the various initiatives the Government of Delhi has taken to protect the environment, and what GLOBE students can to do participate in the effort to conserve the biodiversity of India. 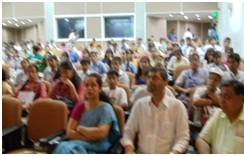 In 2009, a similar GLOBE Youth Forum was held regarding climate research. This forum provided an opportunity for students to improve their understanding of climate issues, conservation needs, and sustainability methods for their environment. It also allowed the students to build an international network among other youth with a mutual understanding of biodiversity and conservation.

The 2009 forum was such a success among its participants that the Indian Environmental Society (IES) decided to hold another one. IES Representative and GLOBE teacher Ms. Sonal Gupta organized the entire event along with Ms. Anuradha Gupta. The two coordinated with Delhi's GLOBE students to prepare them for this event as well as the upcoming COP 11 in Hyderabad, India, October 2012. COP 11 will be the 11th international convention held on biological diversity.

This collaborative effort taught students how they can be leaders and help the development of conservation strategies in their local schools and communities. Coordinators emphasized that biodiversity conservation is not only the concern of adults or scientists, but is the responsibility of every age group.