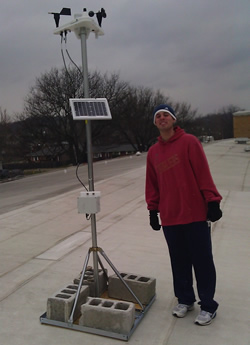 Major climate changes are occurring at exceeding rates in the Antarctic. Ice shelves are breaking up and temperatures have increased within the last 50 years. Many are unaware of these Antarctic climate changes and not many resources are provided to educate the general public. Dr. Ryan L. Fogt, Assistant Professor of Geography-Meteorology at Ohio University and Director of the Scalia Laboratory for Atmospheric Analysis, oversees a GLOBE project that aims to educate 7th and 8th grade Earth Science classes in Southeastern Ohio about the Antarctic climate changes.

The project, Antarctic Climate Change Education through Meteorological Measurements at Schools (ACCEMMS), also tests the feasibility of reconstructing the history of the Antarctic Climate throughout the 20th century. Fogt is assisted by an OU graduate student for the research aspect of the project and two undergraduates for the middle school outreach, as well as two faculty members and six middle and high schools in Southeastern Ohio. The project began in November 2011 and will come to a close in December 2012.

Dr. Fogt works with six schools throughout southeastern Ohio to teach them how scientists study Antarctica's unique climate by first teaching the students how to study their own climates. The main avenue of utilizing local climate data is through automatic weather stations. Awarded by a grant, funded by the Ohio Space Grant Consortium, Fogt presented the project to six schools and set up automatic WeatherHawk stations at each school. GLOBE schools North Adams High School and Peebles High School are participating, along with Morgan County Junior High School, South Point Middle School, Paint Valley Middle School, and Belpre High School. These collaborations will not only benefit the students as they study climate with their peers, but it will allow them to form working relationships with university students and professors.

WeatherHawk weather stations are approved by the GLOBE Program and are designed for both educators and scientists. These automatic stations measure wind speed and direction, air temperature, relative humidity, barometric pressure, solar radiation, precipitation, and evapotranspiration. All the data are programmed to automatically upload to the GLOBE database, making it available to a vast international science community of students, educators, and partners.

GLOBE partner and training-point-of-contact Donna Shepherd works with schools in Adams County and the Ohio Valley School District.  She trained teachers from six schools in  atmosphere protocols, including: cloud, surface temperature, WeatherHawk weather station, and GPS and  also provided extra Infrared Thermometers (IRTs) to each of the schools in order to facilitate their surface temperature studies. "Environmental science teachers at the schools are enthusiastic about this project and excited to have new state-of-the-art weather stations located at their campuses so their students can experience what climatologists do when studying the Antarctic climate," stated Shepherd.

As an educator, Dr. Fogt hopes that this project will allow him to build relationships and connections with the schools and teachers beyond the scope of this project. Fogt commented, "I hope that students will better understand and appreciate the weather from using data and routinely watching observations from the weather station." It is also Fogt's hope that upon the completion of this project, "the students will be aware that climate change is ongoing and is remarkable in other places, especially in the Antarctic."