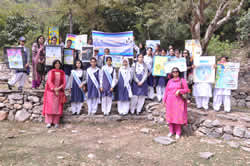 Students and their teachers at Overseas Pakistanis Foundation (OPF) Girls College conduct ongoing GLOBE activities in their Earth Science classes. The school is located in the urban center of Islamabad, and attending students range from four to 24 years in age. Islamabad is the 10th largest city in Pakistan, and currently houses over 1.7 million people. According to Mrs. Shahina Masood, OPF Girls College Principal, newly appointed Assistant Country Coordinator for GLOBE in Pakistan, and member of GLOBE International Advisory Committee, "implementing GLOBE as a regular part of the students' daily curriculum has created a great interest in the environment that motivates them to design their own environmental projects."

These projects often result in research reports highlighted and competitions held throughout the college using posters, skits, speeches and various stage performances by the students. In addition, students actively participate in environmental clubs that focus on strategic projects such as the Carbon Cycle. During this project, students created posters about carbon foot prints and posted them around campus to raise community awareness.

OPF students are regular participants in GLOBE at Night, an international citizen-science campaign to raise public awareness of the impact of light pollution by inviting citizen-scientists to measure their night sky brightness and submit their observations to a website from a computer or smart phone. Shahina Masood stated, "Participation in GLOBE at Night provides our students with the opportunity to learn to appreciate the value of a clear night sky, and at the same time learn about astronomy." 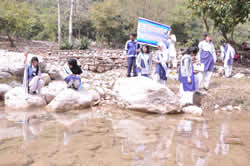 OPF students also participate in the United Nations "World Water Day," an international campaign that raises awareness for the value of freshwater, and emphasizes a different theme related to freshwater each year. The theme for World Water Day 2012 was "A Step to Save Water is a Step to Save the Future."

On 22 March, students participated in a variety of activities that emphasized water conservation. They were very enthusiastic with new promises and resolutions regarding conservation of local water. Students ages 14 and 15 visited their Hydrology Study Site and made beautiful posters highlighting the importance of water in our life. They displayed all the posters at their Hydrology study site the next day, beautifully conveying the message of the importance of water conservation to other people who visited the site. When students reached the stream, they all put on sashes they had painted with the words 'World Water Day' and also carried a collective banner displaying this year's theme message. They performed various Hydrology protocols including water temperature, air temperature, pH, electrical conductivity, and the amount of dissolved oxygen and nitrates in the water. 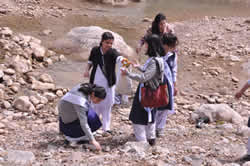 Students observed invertebrates such as colorful flies for the first time and saw a number of small fish in the water. Next, they performed the most important activity of the day: a clean-up of Shahdra stream. They removed many waste materials that had been thrown into and around the stream such as chip bags, empty juice packets, and empty bottles. GLOBE Teacher Zakia Afzal stated, "This cleaning activity is always a source of great satisfaction for the students since their actions provide clean water to small fish and other creatures living in the stream." 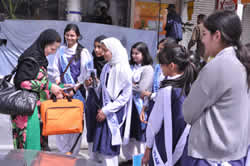 The students' final activity, planned especially for this year's World Water Day, involved traveling to various markets throughout the city to distribute brochures to the local community. The brochures carried a message from GLOBE students of OPF College about the importance of water conservation and various methods of putting it into action. While distributing the brochures, students verbalized some simple steps to help the public conserve water in their everyday lives. GLOBE Teacher Sumaira Ashraf stated, "OPF students are thankful to the GLOBE Program for bringing them so close to nature. This program has made them such responsible inhabitants of the Earth that they will always care for their environment and will never consciously contribute to any kind of damage." 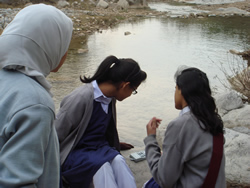 OPF students and teachers also participate in GLOBE's IOPs and implement Land Cover/Biology investigation area protocols. Their new study site is a beautiful stream of running water surrounded by mountains, at an elevation of 650.4m. The bank material is soil but a number of small and large stones can be seen in and around the stream. The stream serves as a fresh water habitat for many kinds of algae, fungi, some arthropods and small fishes. It was somewhat challenging to find this site since the school is located in the middle of a very populated city and the fact that Islamabad has many hills. The closest flat area where they could implement the Land Cover protocols ended up being more than 13 km away from campus. 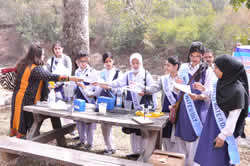 OPF students enjoy implementing GLOBE protocols at their various study sites, particularly in the beautiful spring weather. "Students enjoy the change of pace from their regular classroom activities and appreciate the chance to learn in a hands-on manner," explained Masood. One student noted, "I always look forward to visiting our Hydrology study site. It is so much fun to study different aspects of water." Another student added, "GLOBE activities are very interesting as well as informative." GLOBE teacher Afiya Absar observed that "as they become involved in different GLOBE protocols and activities throughout the year, a mutual love and care for the environment forms among the students."

Principal Masood recently participated in the GLOBE Near East-North Africa Regional Meeting on 9-10 February 2012, where she and Country Coordinators from other countries in the region contributed to discussions and strategic actions that were initiated at a previous regional meeting in Washington D.C. in July 2011. Many collaborative projects involving the students will result.

OPF Girls College was uniquely created in 1986 to serve the daughters of Pakistanis who work abroad as well as providing them with a quality education. Pakistan joined the GLOBE Program on 18 November 1997, and has since been an incredibly active part of GLOBE in the Near East-North Africa region. Mrs. Shahina Masood, works alongside OPF science teachers to guide the girls through scientific GLOBE protocols and real life application of the resulting data.