Benjamin Franklin, Scientist, Statesman and Climate Researcher Using the Past to Explore the Future

John Buchanan, of Philadelphia, Pennsylvania, has a keen interest in Benjamin Franklin. His research into hurricane patterns and his interest in historical climate records have led to the creation of a remarkable new video. This video brings science and history alive by examining scientific data collected during various ocean voyages by Ben Franklin himself, starting in 1775, while he was fighting for the independence of the American colonies.

Most American schoolchildren know about Ben Franklin's kite and key experiment which verified the nature of electricity. They also know about Ben Franklin the statesman, who — along with Thomas Jefferson — drafted the Declaration of Independence in 1776 and came to be known as one of America's "Founding Fathers." But Ben Franklin's work to establish the United States as an independent nation came late in life, long after he had established himself as a publisher, inventor and scientist in many fields.

Born in Boston, Massachusetts, in 1706, the tenth son of a soap maker, young Ben Franklin ventured into several trades before settling for a time into printing and publishing, first as owner of the Pennsylvania Gazette, and later as founder of Poor Richard's Almanac. Almanacs of the era were annual publications containing things like weather forecasts, tide tables, and astronomical information along with homilies and other discourse about issues of the day. Poor Richard's Almanac was one of America's first best-sellers.

Ben Franklin had a natural curiosity about the world and how things worked. His active mind was always exploring how to make things better. For example, later in life Franklin had poor vision and needed glasses to see near and far. When he got tired of constantly taking his glasses on and off, he cut the lenses of two spectacles in half and joined them together, inventing the first bifocals. When he saw how inefficiently homes were heated, he invented the Franklin stove that allowed people to heat their homes and cook their food at the same time. To keep barns from burning down when struck by lightning, he invented the lightning rod. To track distances traveled in his carriage, he invented the odometer. Among many other inventions throughout his life, as an 11-year-old he even invented swim fins!

In addition, Franklin scholars, and quite a few middle and high school students know that Franklin was instrumental in charting the Gulf Stream. Beginning in 1775, whenever he made a voyage across the Atlantic, Ben Franklin took observations of the surface temperature of the ocean. He used these observations to chart what he called the "river on an ocean." Centuries later, not only was this depiction amazingly accurate by recent satellite imagery standards, but that same information is being used for other purposes today. These ocean observations along with bits and pieces of similarly rescued land and ocean data from around the world are being collected and digitized. This data will be turned into information that will be used to help investigate how the Earth's climate has been changing over the last few centuries.

In late 2007, John Buchanan — actuary, hurricane researcher, and friend of GLOBE — was pursuing his interest in Ben Franklin in the American Philosophical Society (APS) Library in Philadelphia. The APS Library is a major national center for research in the history of the sciences, medicine, and technology, founded by Ben Franklin himself in 1743. There, Mr. Buchanan examined various manuscripts containing meticulous land and ocean measurements from America's colonial era. The measurements were being collected in order to encourage emigration from Europe to the colonies, by proving that the "New Land" had a temperate climate and was a hospitable place to live. Writes Mr. Buchanan, "It was quite exciting to be in contact with the original documents written by the likes of Jefferson and James Madison, and to discover records that were written in 1776 on the initial days of the Revolutionary War."

Since hurricane formation is strongly influenced in part by ocean temperatures, Mr. Buchanan wanted to analyze how much the ocean (and land) temperatures have changed over the centuries. His discussions of the historical data with colleagues in Great Britain led him to the ACRE group, a global organization formed to facilitate the recovery of historical land and ocean weather observations taken over the last few centuries for climate applications and impacts need worldwide. ACRE was founded by various government agencies in Australia and the UK and collaborates with the National Oceanic and Atmospheric Administration (NOAA) in the US and many other meteorological organizations around the world. One of ACRE's goals is to recover and digitize all available historical meteorological records. In January 2009, John Buchanan contacted Dr. Rob Allan and Dr. Philip Brohan from ACRE-UK. Dr. Allan was soon en route to the GLOBE Climate Research and Education Workshop at the WMO in Geneva, Switzerland, one of 43 scientists from around the world who came together to identify researchable questions for the GLOBE Student Research Campaign on Climate. Mr. Buchanan put together a small working group of meteorologists and university faculty, known as the ACRE US CEDS (Colonial Era Data Study) Group, to explore pre- and post-colonial US era records. Together, they have established an online file cabinet to help identify such records. The US CEDS group is one of many such worldwide groups established within ACRE. 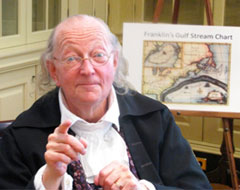 This collaboration provided the initial analysis and impetus for a new video, produced in 2009 by John Buchanan. With acclaimed speaker Ralph Archbold portraying Ben Franklin, the eight-minute-long video provides an introduction to various climate-related topics for students. It relates Franklin's colonial era observations to today's research on climate change and hurricanes. The video can be used across the curriculum — at the middle school level in various Earth science classes and at the university level in History of Science in America classes. It includes a suggested lesson plan to help teachers fit the video into curricula for various levels of students. A large poster is also being developed to accompany the video, showing the changes in climate between the colonial era and today, and including various facets such as Franklin's collection methods and those used by GLOBE students today. The video portrays various aspects of Franklin's interest in and commitment to scientific analysis, collaboration, and publishing. It uses a case study approach to illustrate these principles by applying his ocean temperature readings from the 1770s and 1780s sequentially to help analyze today's major questions of climate change. The video also showcases the vast capabilities of Google to portray differences in temperatures and other readings between the colonial era and today.

Another sample video, narrated by Philip Brohan of ACRE-UK, helps describe how Google was used to construct the highly informative maps contrasting the changing ocean temperatures. An exciting highly visual interactive unit based on utilizing these mapping and comparison capabilities is within easy grasp of the motivated teacher. The video is both entertaining and educational and should help encourage students to carry on Ben Franklin's intellectual curiosity and legacy.

As Ben Franklin said, "Energy and Persistence Conquer All Things." It is hoped that with increased knowledge of historical records as related in the Ben Franklin video and organizations such as ACRE, as well as through the GLOBE Student Research Campaign on Climate, students, teachers, and communities throughout the world will come together to examine local climate issues. Through research on climate issues in our own communities, we can begin to think innovatively and act responsibly to create strategies to preserve and protect the environment in a fast-changing world.