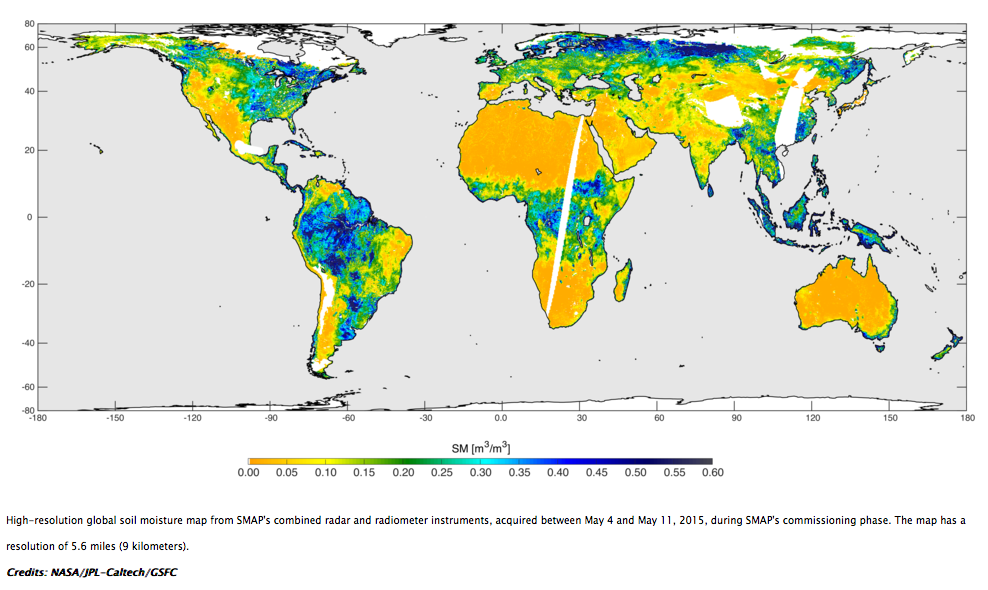 During SMAP's first three months in orbit, referred to as SMAP's "commissioning" phase, the observatory was first exposed to the space environment, its solar array and reflector boom assembly containing SMAP's 20-foot (6-meter) reflector antenna were deployed, and the antenna and instruments were spun up to their full speed, enabling global measurements every two to three days.

Together, SMAP's two instruments, which share a common antenna, produce the highest-resolution, most accurate soil moisture maps ever obtained from space. The spacecraft's radar transmits microwave pulses to the ground and measures the strength of the signals that bounce back from Earth, whereas its radiometer measures microwaves that are naturally emitted from Earth's surface.

"SMAP data will eventually reveal how soil moisture conditions are changing over time in response to climate and how this impacts regional water availability," said Dara Entekhabi, SMAP science team leader at the Massachusetts Institute of Technology in Cambridge. "SMAP data will be combined with data from other missions like NASA's Global Precipitation Measurement, Aquarius and Gravity Recovery and Climate Experiment to reveal deeper insights into how the water cycle is evolving at global and regional scales."

The first global view of SMAP's flagship product, a combined active-passive soil moisture map with a spatial resolution of 5.6 miles (9 kilometers), shows dry conditions in the Southwestern United States and in Australia's interior. Moist soil conditions are evident in the U.S. Midwest and in eastern regions of the United States, Europe and Asia. The far northern regions depicted in these SMAP maps do not indicate soil moisture measurements because the ground there was frozen.

Zooming in on the data allows a closer look at the benefits of combining SMAP's radar and radiometer data. A few days before SMAP collected data over the central and southern United States on April 27, intense rainstorms pounded northern Texas. The areas affected by the storm in northern Texas and the Gulf Coast are visible in great detail. Such detail can be used to improve local weather forecasts, assist in monitoring drought in smaller watersheds, and forecast floods.

Over the next year, SMAP data will be calibrated and validated by comparing it against ground measurements of soil moisture and freeze/thaw state around the world at sites representing a broad spectrum of soil types, topography, vegetation and ground cover. SMAP data also will be compared with soil moisture data from existing aircraft-mounted instruments and other satellites.

Preliminary calibrated data will be available in August at designated public-access data archives, including the National Snow and Ice Data Center in Boulder, Colorado, and Alaska Satellite Facility in Fairbanks. Preliminary soil moisture and freeze/thaw products will be available in November, with validated measurements scheduled to be available for use by the general science community in the summer of 2016.

NASA uses the vantage point of space to increase our understanding of our home planet, improve lives, and safeguard our future. NASA develops new ways to observe and study Earth's interconnected natural systems with long-term data records. The agency freely shares this unique knowledge and works with institutions around the world to gain new insights into how our planet is changing.

For more information on SMAP, visit: