What is air quality?

Air quality is a measure of how clean or polluted the air is. Polluted air can be caused by many things. Some causes of air pollution include: emissions from factories, power plants and oil refineries, combustion of oil and gas, smoke from fires, gases and ash from volcanic eruptions, and blowing dust, and hydrocarbon emissions by some trees. These causes of air pollution are called primary pollutants because they are emitted directly into the atmosphere from a source (like a car or factory). However, air pollution doesn’t always come directly from a source. Secondary pollutants are caused by chemical reactions in the atmosphere between primary pollutants.

Worldwide, air quality is monitored by a network of environmental agencies. These agencies monitor the levels of both primary and secondary pollutants in the atmosphere. The major air pollutants that are monitored include:

The overall air quality in an area is measured using the Air Quality Index, or AQI. AQI is a unitless number, from 0 to 500, that communicates the health risk caused by the amount of pollution in the air. A reported AQI value can be based on particulate matter levels only, ozone levels only, or a combination of the two.

The weather plays a large role in determining the air quality in a particular area. Since many secondary pollutants require sunlight to trigger the chemical reactions that form them, sunny days may have higher AQIs than cloudy days. Similarly, higher temperatures can speed up the formation of secondary pollutants, as well. Precipitation generally means less air pollution; particulates and aerosols are typically ‘washed out’ of the air by rain or snow. Some pollutants dissolve in rain drops. Wind has a large effect on air quality; pollutants are frequently transported from their source to different areas downwind.

Why is knowing about air quality important?

The greatest health risks from air pollution are caused by ground level ozone and particulate matter. According to the EPA, “ozone can cause muscles in the airways to constrict, trapping air in the alveoli” in the lungs. This can make it difficult to take a deep breath and can aggravate certain medical conditions. People who are at particular risk from ozone pollution are children, older adults, and those with asthma. Particulate matter, particularly PM smaller than 10 microns, can also aggravate asthma, and can cause “decreased lung function and increased respiratory symptoms”.

The purpose of the Air Quality Bundle is to provide students with a set of protocols to use to monitor local air quality, which can keep community members and stakeholders informed and help guide policy decisions. Scientists (like those working with the TEMPO mission) can use data gathered using GLOBE protocols to help ground-truth satellite air quality measurements.

Air quality (a measurement of the amount of pollution in the air) is affected by a number of factors. These factors can include the source of pollutants, the type of pollutants, and local climatological and weather conditions.

Natural sources of pollution are part of Earth’s natural climatological and ecological cycles. Some, like smoke from wildfires and dust from dust storms, occur seasonally, or under certain climactic conditions (such as drought). Certain types of vegetation can release air pollutants called volatile organic compounds (VOCs), which can quickly react chemically and form aerosols, causing haze. (This phenomenon is where the Great Smoky Mountains get their name!) Other sources of natural pollution, like volcanic eruptions, are less predictable, but can have global effects. Ash and sulfur dioxide from highly explosive eruptions can be spread around the world by winds high in Earth’s atmosphere, which can reflect solar radiation and have a significant cooling effect.

Anthropogenic sources of air pollution are the result of human activity. The main source of anthropogenic pollution is the combustion of fossil fuels (coal, oil and natural gas) for transportation, generation of heat and power, and operation of industrial facilities. Depending on the type of fuel being burned and the intended purpose, different types of air pollutants are produced, which can include fine particulate matter and various gases. Anthropogenic sources of air pollution are generally emitted from a specific location, so they are known as point sources of pollution. Knowing specific locations of point sources (such as factories or power plants) is very useful when studying the air quality in a specific area.

Most anthropogenic primary pollutants are caused by combustion. This is the case with oxides of nitrogen (NOx) – nitric oxide (NO) and nitrogen dioxide (NO2) – and sulfur - sulfur dioxide (SO2). Vehicles primarily produce NOx. NOx and SO2 come from power plants that generate electricity by burning fossil fuels; SO2 is also generated by smelting. Organic compounds – both volatile organic compounds (VOCs) and particulate organic compounds (POCs) – are primarily due to incomplete combustion (either from industrial sources or vehicles). Particulate matter can be either liquid or solid, and, depending on the source of the particulate matter, can be composed of a wide variety of compounds in a wide variety of sizes. For example, particulate matter from combustion of coal is mostly composed of black carbon (incombustible organic matter in the coal) and oxides of silicon, aluminum and iron. However, other industrial processes also produce particulate matter. Mining, refining and manufacturing products such as iron, steel, cement, asphalt, grain, and wood products, produce particulate matter that can be larger than 15 microns and smaller than 2.5 microns in diameter.

How can satellite and weather measurements be used to explain air quality events?

The graph below (from the GLOBE Visualization System) shows Aerosol Optical Thickness, measured with a Calitoo sun photometer at Sunridge Middle School in Athena, Oregon, from July 1 – August 31, 2018.

The graph shows low AOT values during the beginning of the time period, generally less than 0.2. However, in the middle of August, there is a sharp increase in AOT values, with the largest AOT value measured on August 13.

The images below, generated with the GLOBE Visualization System, show the location of Sunridge Middle School (indicated by the circular icon), along with a map of AOT values measured by the MODIS instrument on the Terra satellite. The circular icon for Sunridge Middle School changes color with increasing AOT values, becoming a darker brown as values increase. Increasing AOT values measured by MODIS are indicated by redder colors.

Further investigation, using satellite data available via NOAA’s AerosolWatch website, indicates the presence of smoke in the western United States. The images below show smoke and dust, detected by the Visible Infrared Imaging Radiometer Suite (VIIRS) instrument on board the Suomi NPP satellite, as well as Aerosol Optical Depth (a value analogous to Aerosol Optical Thickness, or AOT) and true color satellite imagery. Therefore, it is likely that the increased AOT values measured at Sunridge Middle School were caused by smoke from wildfires.

Note: In addition to the AerosolWatch site mentioned above, NASA’s WorldView and the IDEA website are also excellent sources of satellite-based aerosol measurements. 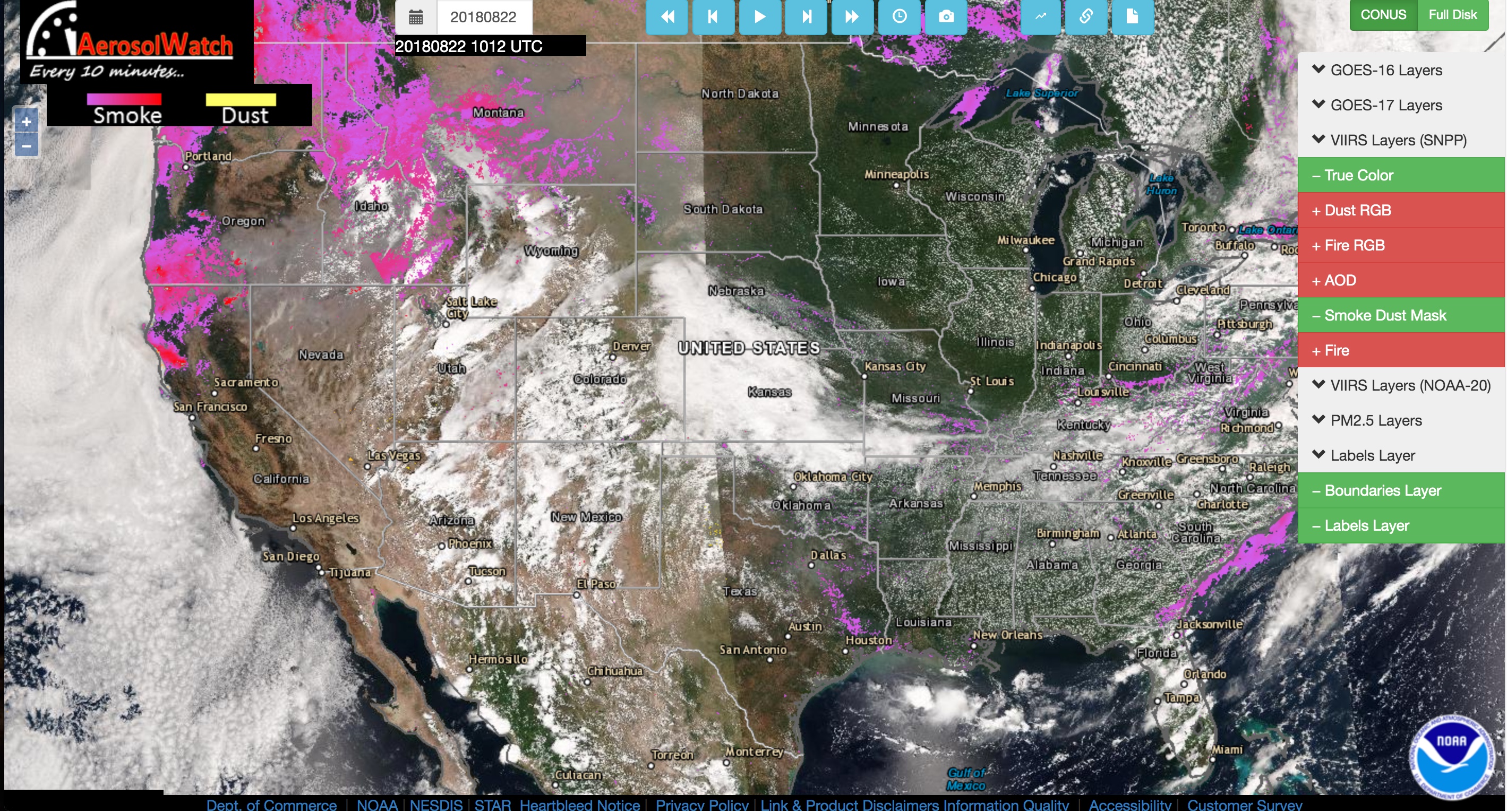 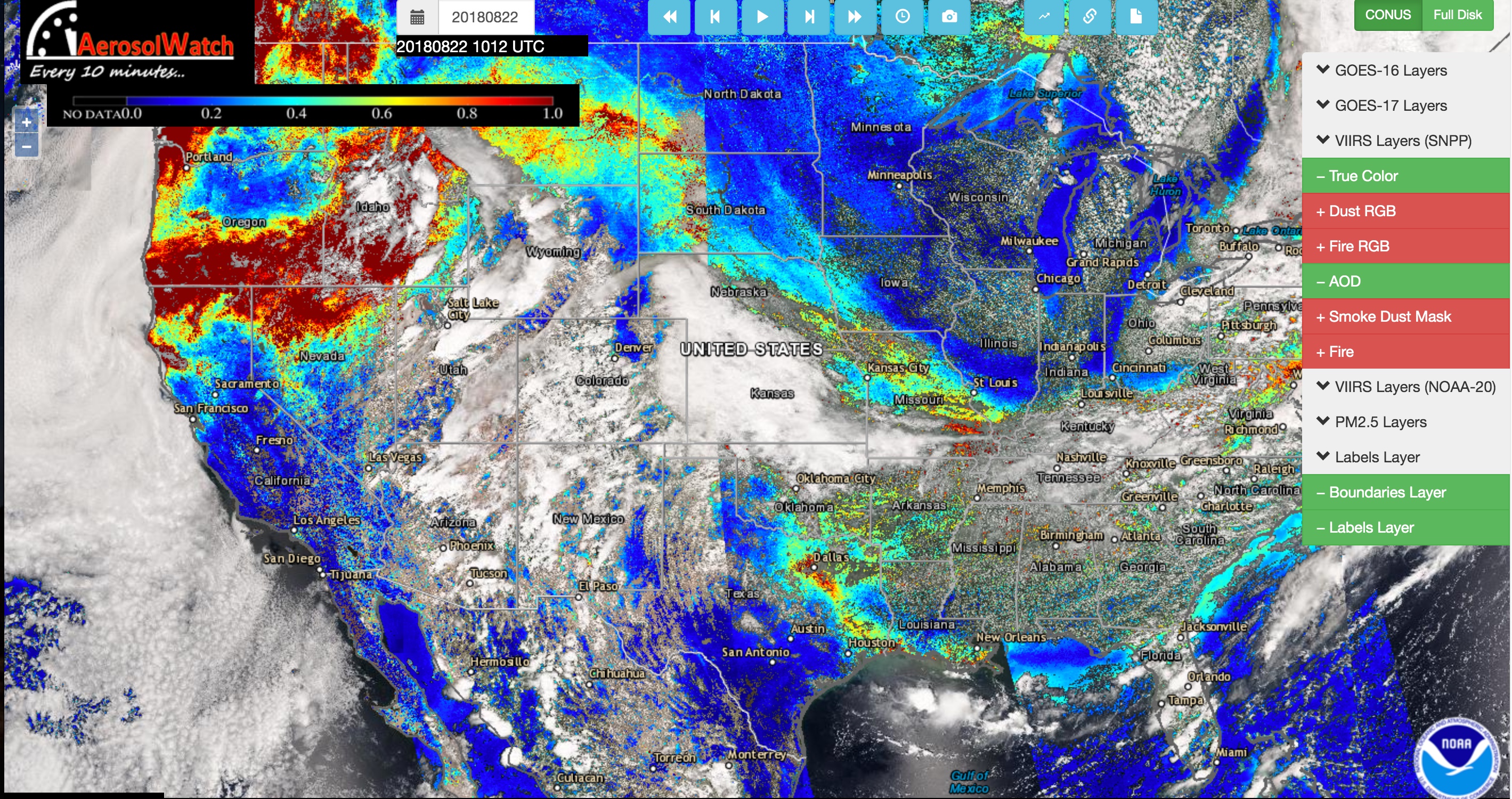 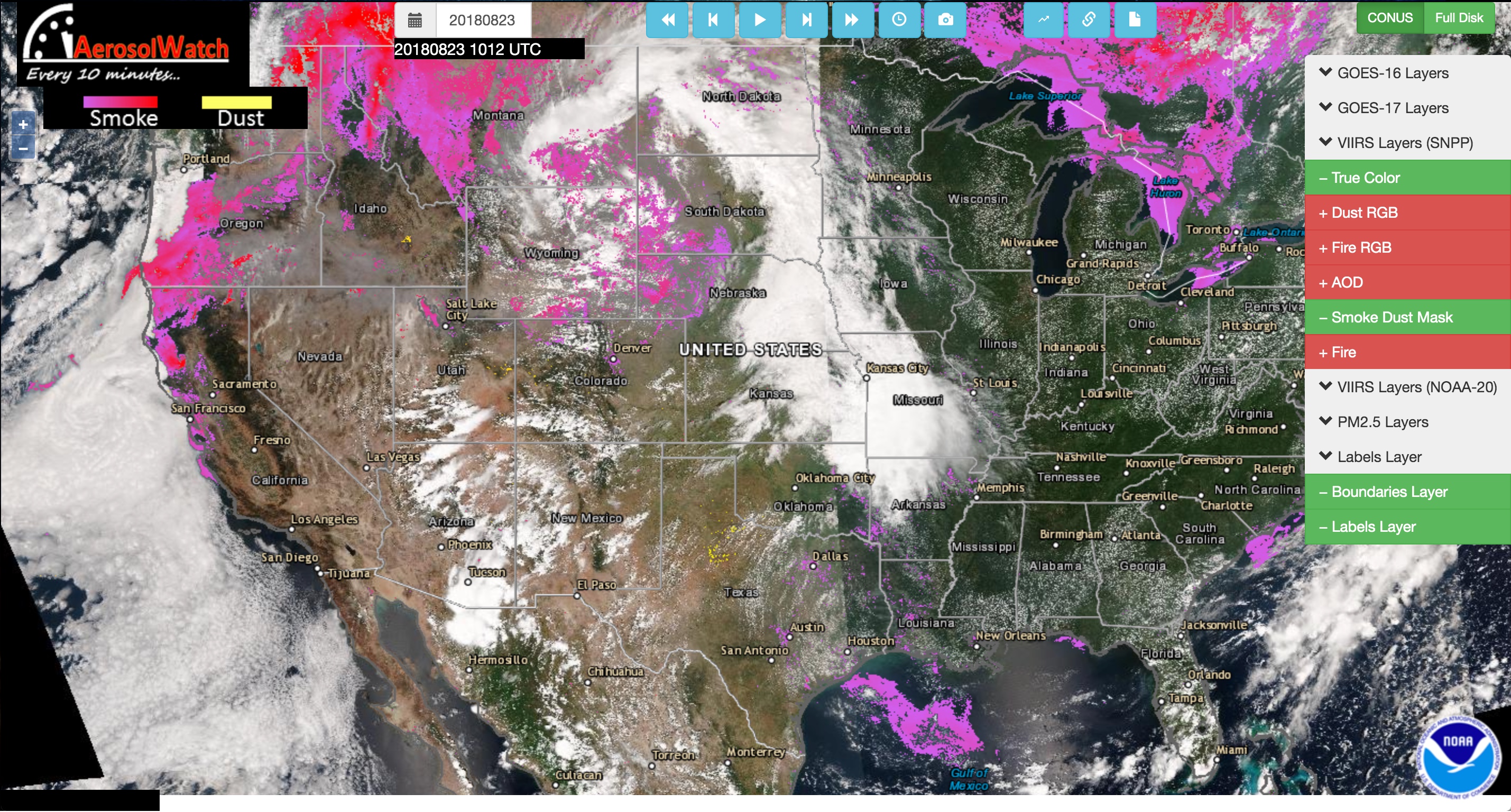 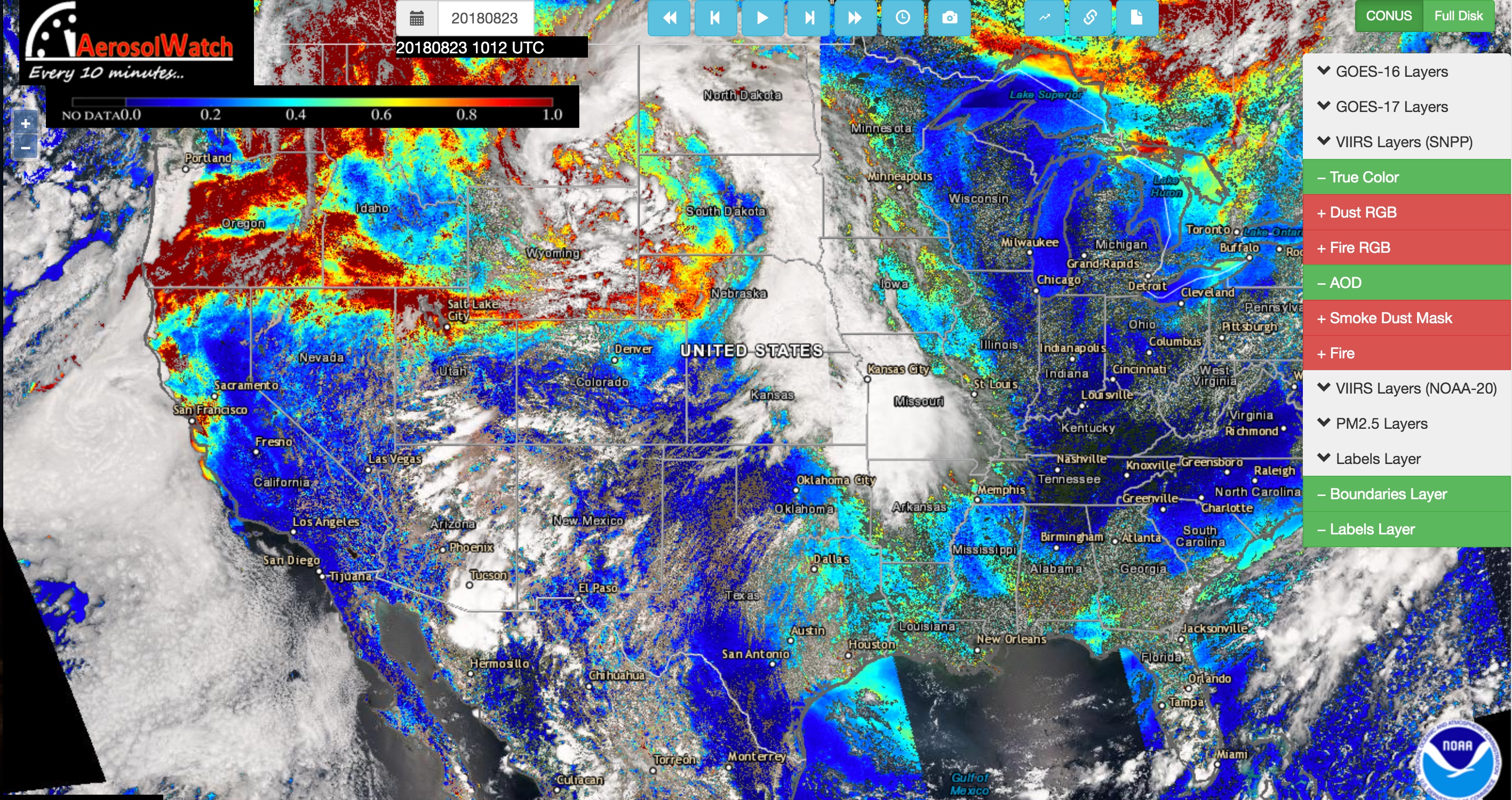 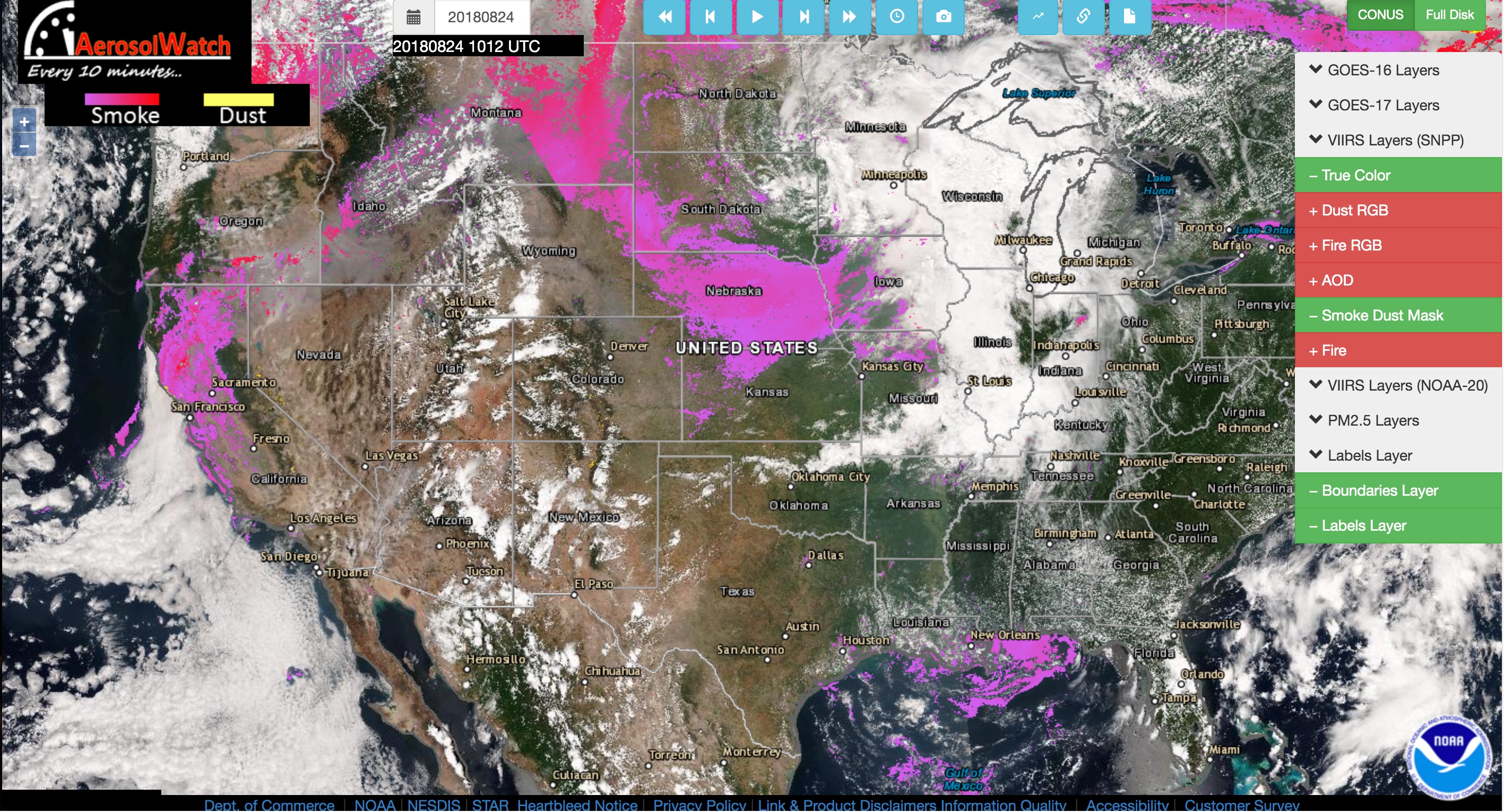 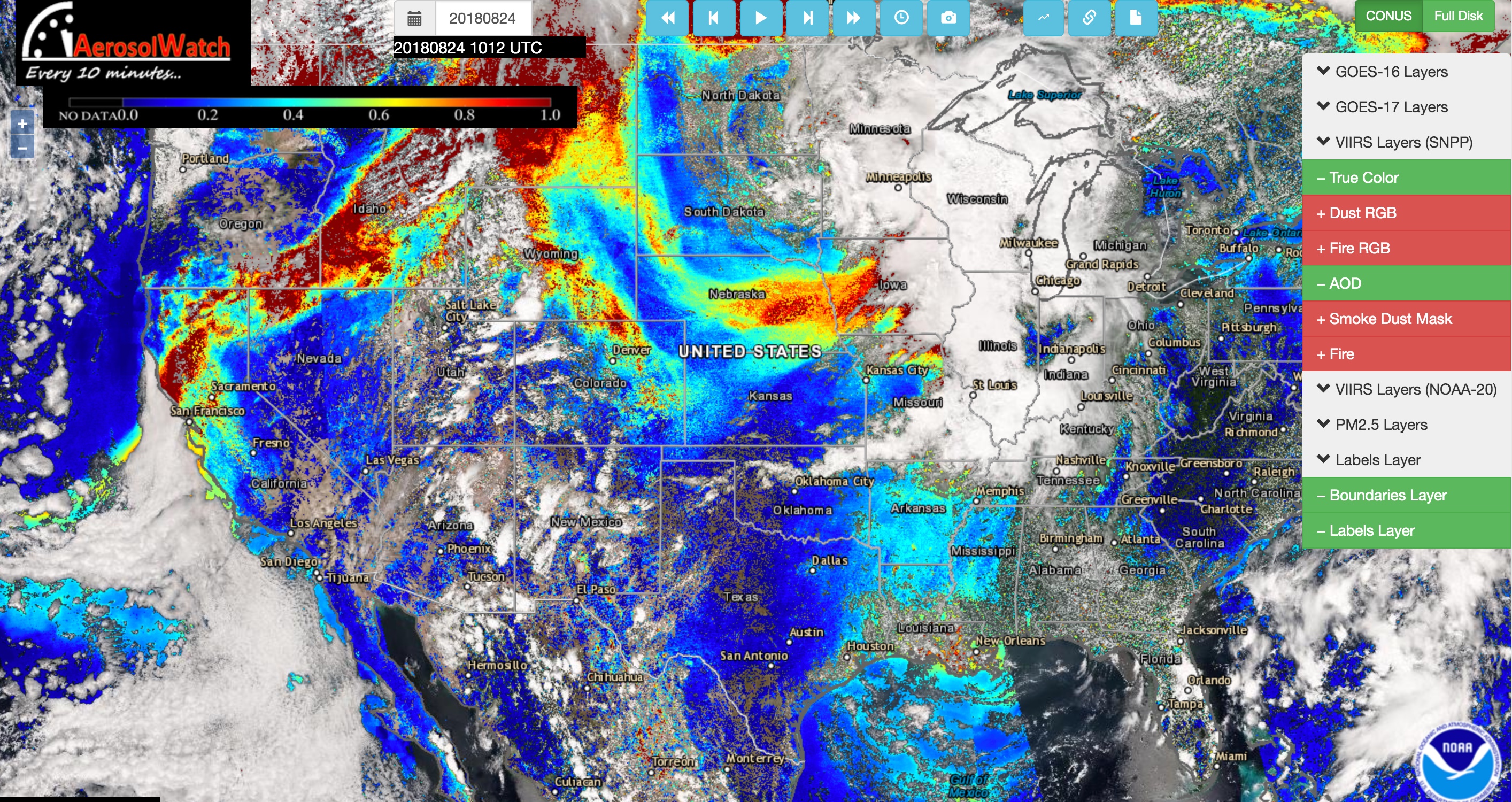 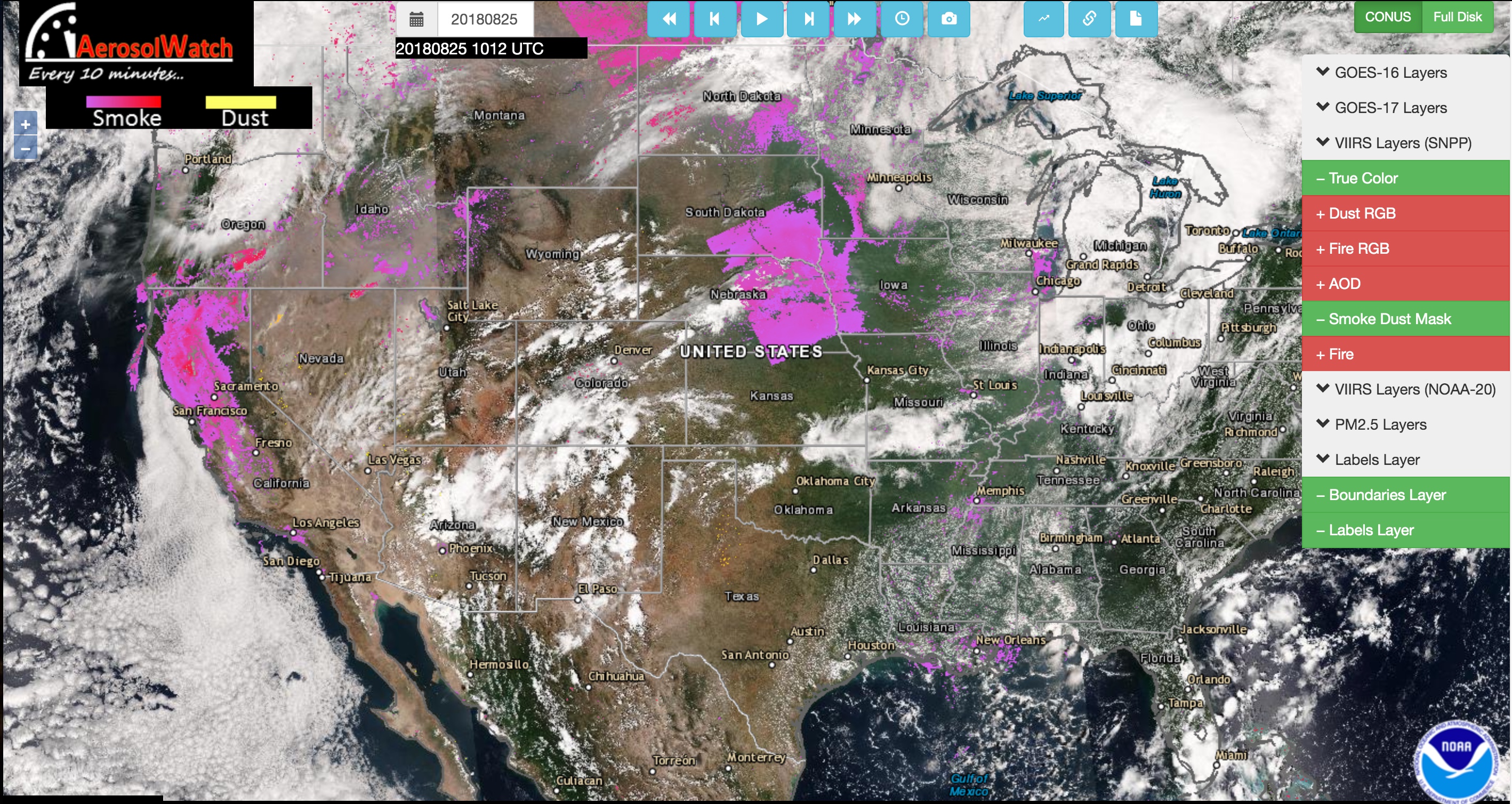 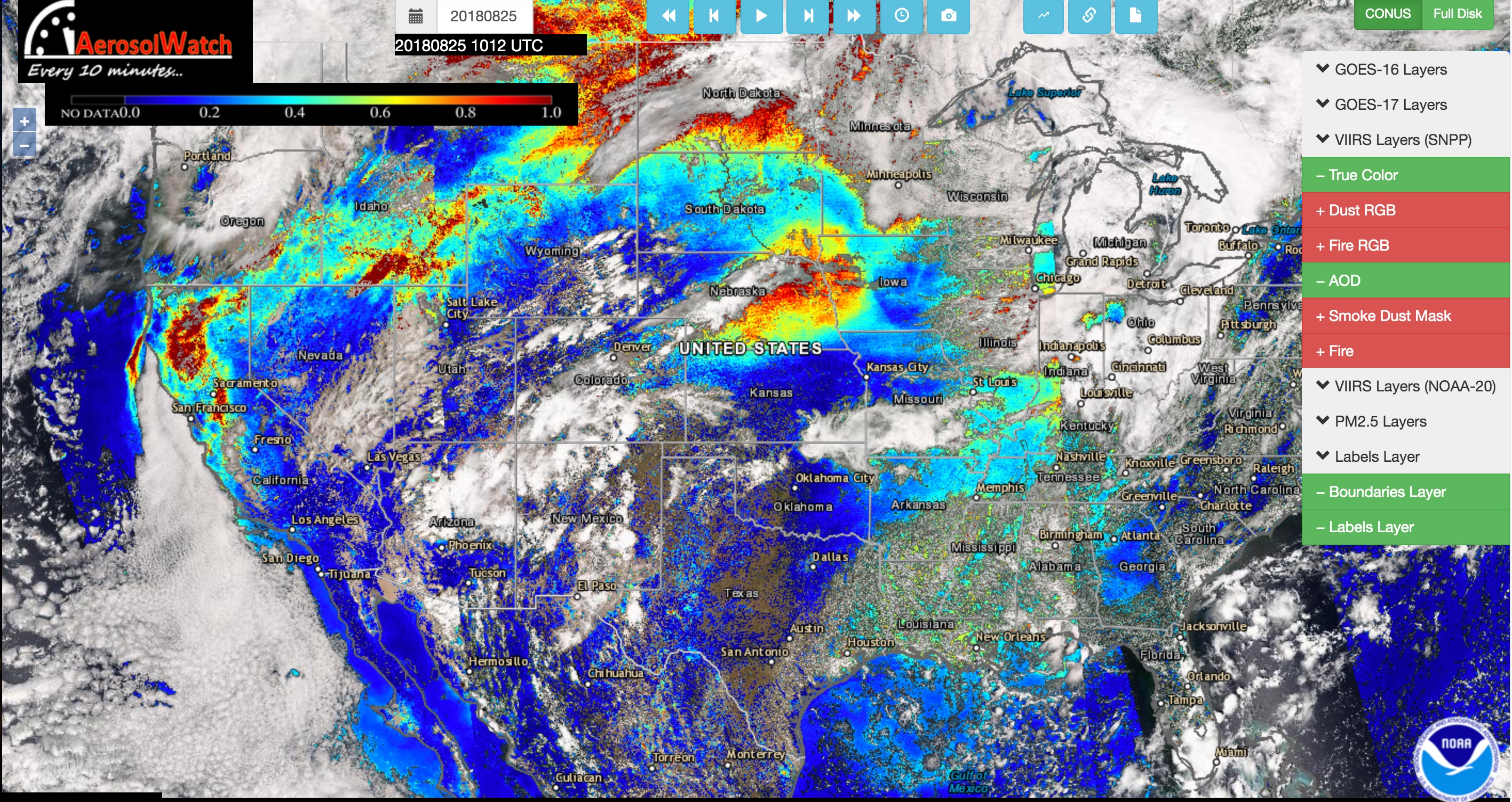