Mosquito Bundle - Earth as a System

Mosquitoes infect hundreds of millions of people around the world with diseases such as yellow fever, malaria, and dengue. These diseases have serious health impacts and kill millions of people each year. According to the World Health Organization, more than 50% of the world’s population is at risk of contracting a mosquito-borne illness.

By making observations and recording data using the GLOBE Observer Mosquito Habitat Mapper App, you can report information about the mosquitoes that you find in your local area and help contribute to reducing the risk of disease outbreaks in your community. In temperate regions, climate change and warming temperatures have accelerated invasive mosquito migration to higher elevations and latitudes. In order to breed and develop, mosquitoes need warm temperatures (6-16° C minimum) and a source of standing water. Because of these requirements, mosquito populations are acutely sensitive to changes in environmental conditions.

Inside the GLOBE Mosquito Bundle, you can find GLOBE Protocols and datasets that will help you better understand how mosquitoes interact with the various Earth Spheres. You can also use these resources in conjunction with our Mosquito Habitat Mapper data to explore scientific questions relating to public health, as well as expanding our understanding of mosquito biology and ecology.

Mosquito vectors are considered to be among the deadliest animals in the world. The WHO estimates that millions of people succumb to diseases transmitted to humans by mosquitoes every year.

Changes in both human activity and climate play a significant role in the increase of vector-borne disease worldwide. Human migration, travel, and commerce have enabled mosquito species in previously isolated areas to expand into countries around the world. Furthermore, our rapid urbanization of natural areas and changes in land use practices have increased vector-borne disease risk by bringing mosquito vectors into close proximity with human populations. For example, unreliably piped water and inadequate sewage management can create opportunistic breeding environments in urbanized areas, while deforestation of natural habitats for agriculture, forestry, and mining introduce mosquito vectors to new landscapes and place them in direct contact with our communities.

Changing climates have also enabled invasive mosquito species once confined to the tropics and subtropics to advance poleward, establishing populations with the potential to transmit deadly pathogens. Changes in precipitation patterns—both increased frequency of heavy rainfall, and counterintuitively, drought events—can promote the creation of opportunistic still-water habitats for breeding mosquitoes. Increased temperatures enable species to expand their ranges into areas where seasonal freezing and cold temperatures were once a limiting factor, while also improving mosquito survival, susceptibility to pathogens, increased biting behavior in females, decreased maturation time, and more generations per season. This accelerated rate of pathogen development and transmission results in an increased risk of mosquito-borne disease.

How Does a Mosquito Function?

There are still many fundamental questions about mosquito biology and ecology that are being explored. By examining the relationship between environmental data and mosquito data, we can continue to fill critical gaps in our understanding of disease transmission dynamics. For example, because mosquitoes are cold-blooded organisms that spend part of their life cycle as an aquatic organism, we expect there's some connection between mosquitoes and temperature/precipitation data. Scientists have investigated a wide variety of environmental variables, some of which have shown to be important factors in determining when and where mosquito habitats are found.

In sub-Saharan West Africa, scientists have been investigating how malaria vectors survive during the intensely hot and dry months. While some species are able to persist in a semi-dormant state, or aestivation, during the dry season, research by North and Godfray (2018) modeled the persistence of mosquito vectors of malaria in Burkina Faso. They determined that neither aestivation nor local dispersion from nearby (ca. 30 km) regions with year-round moisture could explain the dramatic surge in mosquito populations observed in sub-Saharan West Africa during the rainy season. Their model suggests that long distance migration—over hundreds of kilometers—best explains the observed population dynamics.

Variations in humidity can also impact vector populations. In an experimental analysis, a decrease in humidity from 80% to 60% reduced egg numbers and changed oviposition patterns (Costa et al. 2010). Surface wetness, modeled from soil moisture, topographic and vegetation data has been used to predict the abundance of flood and swamp water mosquitoes (Shaman et al. 2002). In a study targeting mosquito species responsible for transmitting malaria pathogens in Kenya, models that include soil moisture as a parameter improved prediction of biting rates compared to rainfall alone and was broadly more predictive than raw precipitation data. Moisture lags of two weeks explained up to 45% of Anopheles gambiae biting variability, compared to 8% for raw precipitation (Patz 2002).

Insect trapping experiments from the Sahel in Mali have demonstrated that mosquitoes can travel as high as 290 meters above the ground for as far as 300 km in a single nighttime 9-hour flight (Huestis et al. 2019). The authors propose that seasonal high-altitude southerly winds could carry mosquito vectors to the Sahel from wetter, year-round habitats in the south, and return them when the winds blow in the opposite direction in the dry season. The model by Huestis et al. (2019) suggests that massive migrations of more than 50 million mosquitoes take place every year in this region, and may resolve the region’s “dry-season paradox,” (Dao et al.  2014).

Sallam et al. (2017) conducted a systematic meta-analysis of research studies that examined the land cover, meteorological, and socioeconomic factors that potentially explain when and where Aedes mosquitoes were found. The authors compiled the outcomes from 21 published research studies that employed a variety of different methodologies, models, and variables. In their review, they identified the most common parameters examined by different teams exploring factors determining the spatio-temporal distribution of Aedes mosquito habitats, as well as the most common modeling software employed. Some of their results are listed below:

The review noted that there was no single factor that could explain variation in the spatiotemporal distribution of Aedes. The authors concluded by emphasizing the need for more studies, “to improve our knowledge about Aedes presence/abundance within their flight range in response to the interaction between environmental, socioeconomic and meteorological systems,” (Sallam et al. 2017).

By examining the data from our GLOBE Protocols, environmental satellites, and Mosquito Habitat Mapper, you can continue to contribute to our understanding of the importance and roles played by these different environmental variables. In future research, comparing these parameters in conjunction with demographic and epidemiological data in a multi-system modeling approach will generate risk models that can be utilized to predict disease outbreaks and inform mosquito control practices.

To better understand how mosquito populations respond to short- and long-term habitat changes, there are many first-order, scientific questions that can be explored. These questions include:

In addition to examining the relationship between environmental conditions and mosquito populations, there are also opportunities for students to conduct field experiments to illuminate the egg-laying behaviors of different mosquito vectors. Check out some of our student projects for the Mosquito Bundle below:

Note: The Mosquito Habitat Mapper has a comment box labeled eliminate breeding habitat on the last frame of the mobile tool. You can use this box to keep track of specific habitat variables you're examining, to identify container features that aren't listed in the app choices, or for whatever purpose you need while taking measurements. When you upload your data to the GLOBE database, and you can continue to access all of your observations you wrote in the comments box.

To get an idea of how all these different environmental variables are incorporated into the Mosquito Bundle, check out the following case study trying to answer the question:

House index was calculated as the number of positive households divided by the total number of households inspected. Household locations with the number of mosquito larvae were visualized as the point overlaid on Google Earth. Descriptive statistics were calculated. Independent sampled t-tests were used to test the mean differences of dengue cases and climatic factors are influenced by El Niño-La Niña events. Pearson correlations were used to test the association between dengue cases and climatic factors. The significant tests were one-tailed with significant level at P<0.05.

The number of dengue cases seems to be increasing after El Niño events (Figure 3). 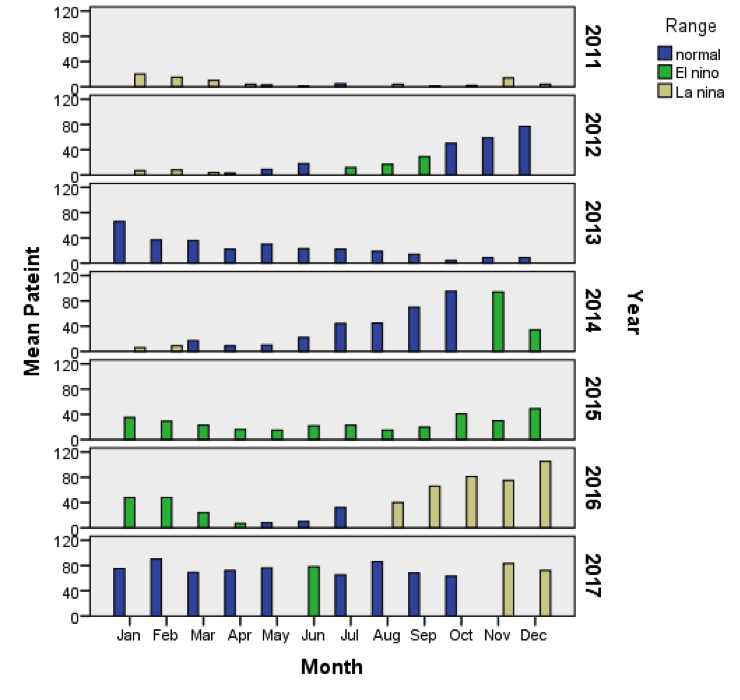 The ENSO index and Relative Humidity in El Niño times

Climate change poses a great threat to human health in the 21st century. Vector-borne diseases, mediated by cold-blooded organisms, are expected to be the “most climate-sensitive subset of all infectious diseases,” because of their sensitivity to a wide variety of climate parameters (Caminade et al. 2019). Documenting changes in the Earth system, in conjunction with the distribution and prevalence of mosquito vectors, is critical to decreasing disease risk and improving human health worldwide. By using the GLOBE Observer Mosquito Habitat Mapper app, you're helping us gain a better understanding on the location and numbers of mosquitoes present at a variety of spatial scales, from community-scale to worldwide.

WHO (2020) Mosquito-borne Diseases. Retrieved from https://www.who.int/neglected_diseases/vector_ecology/mosquito-borne-diseases/en/