Two thirds of Earth’s surface (70.9%) is covered by oceans (NOAA, 2018). Oceans are a vast source of food and raw materials recreation, transportation,  and other functions of importance for human well-being (Halpern et al. 2012). As an example,  43% of services provided by the biosphere come from ocean ecosystems (Levrel et al. 2014), and one third of the world's population lives in coastal areas (Rao et al. 2015). Given the above, it is of critical importance to increase our knowledge about oceans and coastal ecosystems as well as to design and implement measures for their protection.

Oceans are complex ecosystems, which implies that their study needs to take into consideration several interrelated physical parameters, not to mention the mechanisms and processes which reflect the interaction between land and oceans along coastal zones as well as the interaction between the atmosphere and oceans.  Furthermore, answering a research question related to oceans requires exploitation using a variety of methods and the integrated use of different measurements; the participation of students, teachers and scientists, facilitates the advancement towards a better understanding of the marine and coastal environments.

This blog presents a proposal for a group of protocols to be jointly implemented to improve our knowledge about oceans.

II. List of the GLOBE Protocols included in the bundle

Figure 1 presents the protocols that are included in the Ocean Protocol Bundle: Atmosphere, Hydrosphere, Biosphere and Pedosphere. The parameters to be measured following each protocol are also provided.

Many studies have been conducted to understand the role of oceans in climate. For example, it was found that approximately 84% of the heat added to Earth’s climate system has been absorbed by oceans (Hansen, 2004); oceans store carbon dioxide (Kum, 2011) and as a result they reduce climate change and its impacts.

Oceans face significant problems due to marine and land based pollution and overfishing (which depletes fish stock). Marine pollution results in the degradation of marine ecosystems as well as in the deterioration of the quality of life of coastal communities (Selkoe et al 2008).

Given the above, ocean related research may be based on such questions as:

-       How much does the surface temperature change in relation to the distance from shore?

-       What are the most common cloud types close to the ocean? How do they change with the seasons?

-       What are the most important water variables to the fish and invertebrates distributions?

-       What is the land cover close to the coastline and how is it affected by the nearby ocean?

-       What is the relation between temperature and dissolved oxygen in the oceans?

-       What is the relation between turbidity and algae biomass?

Studies using GLOBE Protocols can be highly supportive for ocean management and resources conservation. Students can play a key role in such studies and thus contribute to safeguarding of the marine environment,

IV. Discussion of GLOBE Protocols included in the bundle

Any research requires the inclusion of at least two protocols to verify an hypothesis, it is strongly recommended to choose two or more protocols to gain a better understanding of the research question. Following are brief descriptions of them in order to understand the importance and utility of each one of them

-       Cloud cover and cloud type: The type and cover of clouds could be influenced by their proximity to the oceans due the evaporation. For example, it could be common to observe bigger clouds and greater cover on the sea than far from it. Clouds observations are easy and not expensive. A trained eye and a Cloud charts or the Cloud App help data quality

-       Precipitation: The amount of rain in a place is linked with the evaporation rate and the way the vapor mass is moved by the wind. Some places in the world have ocean areas with high precipitation, while others are deserts, to recognize what is the precipitation pattern in your study area and why it has this behavior, could be very interesting. A rain gauge is adequate instrument to measure precipitation or data from an automatic meteorological station.

-       Temperature: Daily Maximum/Minimum Air and Surface: Water has the potential to modify the temperature in the area surrounding water bodies, being this more important in the oceans. Thermometers of maximum and minimum and an easy training are important to develop this research. Likewise, it could be interesting to know the influence of the oceans on the surface temperature using an infrared thermometer to measure the effect of the ocean on different surfaces and substrates that are part of marine landscape.

-       Barometric Pressure: This is the force that the atmosphere produces on an area, this elevation and altitude. High pressure generally brings fair weather, and low pressure is associated with “bad weather”.  This can be verified using a Barometer

-       Aerosols: Aerosols are liquid or solid particles suspended in the air. Aerosols have impact on the climate by increasing or decreasing the amount of sunlight that reaches Earth’s surface. The number of aerosols may be increased near the ocean due the salt particles from evaporated sea spray. This can be investigated using a sun photometer

-       Wind: Waves are dependent on the wind velocity and wind direction and the distance the wind is blowing in the same direction over the water. There are many human activities that in turn depend on the wave’s as energy production and some aquatic sports such as windsurfing. This variable can be measured using an Anemometer

-       Salinity: Salinity is the amount of salt dissolved in water; many marine species need a specific concentration of salt to survive. Salinity also affects the dissolved oxygen, and it is linked with the temperature. To measure the salinity a hydrometer or a test kit may be used

-       Water Temperature: This is considered a master variable because almost all properties of water, as well as chemical reactions taking place in it, are affected by it.   Water has a higher heat capacity (specific heat) than air, thus it heats and cools more slowly generating a thermoregulatory effect. Temperature, also, influences the amount and diversity of aquatic life. Electrical conductivity and dissolved oxygen require water temperature data. A water thermometer is the instrument used to perform this protocol

-       Nitrates: Nitrogen can be found in many chemical forms in water. Biological and physical processes transform the chemical forms as part of the nitrogen cycle. The GLOBE Nitrate Protocol targets nitrate (NO3-). Nitrate (NO3-) is usually the most important inorganic form of nitrogen because it is an essential nutrient for the growth and reproduction of many algae and other aquatic plants. Nitrite (NO2-) is usually found only in waters with low dissolved oxygen levels, called sanoxic waters. To test for nitrates, use a test kit or probe. Nitrates are a common pollutant that is transferred from overfertilized agricultural fields by runoff.

-       Salinity: Saline water can hold less oxygen at the same temperature and pressure than can fresh water

-       Arctic Bird migration: Most of the migratory birds are marine. This protocol consists of recognizing and counting the number of migratory birds that arrive to the ocean in the different seasons, recognizing patters in their observations and establishing links with variables as air temperature, students could learn more about the bird’s ecology. Birds guide, binoculars

-       Land cover classification: Coasts usually are impacted by waves and wind and these variables could modify the land cover over time, impacting the habitat of many species and the location of infrastructure To assess this use the GLOBE Observer Land cover protocol.

-       Temperature: The temperature of marine sediments could influence the Dissolved oxygen in the area and create microhábitats for some marine species. To develop this protocol it is important to have a soil thermometer

-       Soil pH: The pH of sediments could influence the marine and coastal living things, which could be interesting to measure. pH paper, pens, or probes can measure pH.

This study investigated environmental factors affecting the diversity of Marine benthic communities in man-made mangrove forest at Pak Nakhon, Thailand. The objectives were to study the species and numbers of Marine benthic animals in the study site and also to examine the relationship between environmental factors and numbers of Marine benthic animals. The samplings were collected from mangrove area that was divided into three zones according to the distance from the Pak Nakhon estuary.    The parameters measured where benthos number and composition, air temperature, humidity, soil pH, moisture and temperature reflecting three GLOBE protocols namely biosphere, atmosphere and pedosphere. Results showed that among several environmental factors, soil temperature and moisture affect the number of benthos.

In general mangrove forest in the coastal area of ​​Thailand has decreased since 1961. We found from the reports that due to the rehabilitation efforts, mangrove vegetation in Nakhon Si Thammarat province has improved substantially (Figure 1). The mangrove forests in Nakhon Si Tammarat are natural ones as restored by human management. Mangroves are the most important sources providing fish, shrimp, etc for human consumption. Taken that marine benthic animals are sensitive or tolerant to changing environmental conditions, they are considered biological indicators for any change in environmental condition.

Research question: What are the environmental factors that affect benthic communities in the restoration mangrove?

Hypothesis: Most environmental factors may strongly influence the benthic population and diversity 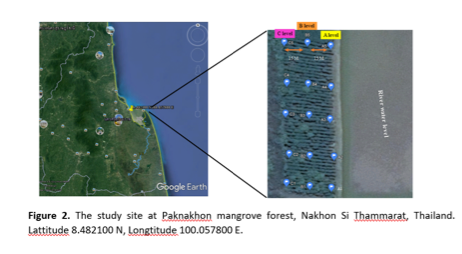 We collected sample from the study site which was divided into three zones according to the distance from the Pak Nakhon estuary.  Five samples were collected in each zone (Figure 2). The parameters measured, with the use of GLOBE protocols, were marine benthic population, air temperature, relative humidity, soil pH, moisture and temperature, at each zone.

The mean number of different species of Marine benthos is presented in Figure 3 for the three zones under investigation. The relationship between soil (pH, moisture, temperature), Relative humidity, and air temperature and the benthic population are presented in Table 1.

Results on the biodiversity of benthic communities at the mangrove sites, showed that the numbers of benthos are dependent on soil temperature and soil moisture. Benthos and soil moisture are positively correlated (P<0.05), whereas benthos and soil temperature are negative correlated (P<0.05). The presence and distribution of Marine benthic species depends on the tolerance to the habitat (Suzuki et al., 2002).

Among several environmental factors soil temperature and moisture affect the numbers of benthos.

Oceans affect our welfare and in turn, our lifestyle affects the state of the oceanic environment. This is an important reason to increase our ocean literacy by means of hands on experiments that provide the opportunity to acquire new knowledge about our local environment through experiments.

GLOBE offers many opportunities to further promote research about oceans.   Your research questions are important to guide us towards a better understanding about what is happening with our ocean ecosystems worldwide.