Soils Bundle - Earth as a System

Soils are one of Earth’s essential natural resources, yet they're often taken for granted. A living, breathing world, soils support nearly all terrestrial life by holding nutrients and water for growing organisms as well as filtering the water that flows through the ground.

Soils also influence how much water percolates back into the groundwater supply, an important factor for human settlements. 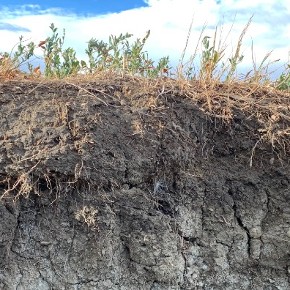 Despite its fundamental importance to life, soil comprises only 25 percent of the Earth's surface, of which only 10 percent can be used to grow food. For this reason, the human contamination and desertification of healthy soils due to increasing temperatures can have major impacts on food production and the health of the entire ecosystem. To avoid the most catastrophic effects, it's of the utmost importance to manage and protect our soils wisely.

To support these conservation efforts, researchers and organizations monitor our fertile soils very closely. These soil characteristic measurements are critical to identifying factors that influence the health of the soil and impact ecosystem function on land. Soil characteristics also affect water quality and aquatic ecosystems by contributing solid and dissolved materials to surrounding water bodies. Additionally, scientists use this data to determine various hydrological, meteorological, and carbon-storage processes.

Soils and their function within an ecosystem vary greatly from one location to another as a result of many factors, including differences in climate, animal/plant life, and the type/age of the soil. Inside the Soils Bundle, you can find a collection of protocols, prompts, and projects related to these issues and their intersections with the various Earth Spheres.

Generally, scientists want to understand how water cycles through the local or regional environment. For example, they want to understand how precipitation and melting snow relate to increases in the water levels of streams, rivers, and lakes. To better understand these processes, we can take soil moisture measurements. When these measurements are gathered for an entire soil profile, they can be used to predict floods, droughts, or the optimal timing for crop irrigation. Scientists can also combine this data with soil temperature, relative humidity, and land cover data to estimate the rate at which water is returned to the atmosphere through evaporation and transpiration.

Soil moisture is also a major data factor studied by Phenology scientists. These scientists look at the effect of soil moisture on the annual cycles of plants, such as trees and annual grasses. For example, in some forested regions, tree growth begins in the spring when the soil becomes moist and then stops during the summer when the soil becomes dry. By studying how soil moisture changes over time, researchers can begin to draw conclusions about how the climate has changed over the years.

Soils can also affect the amount and characteristics of runoff into surrounding water bodies. For instance, runoff influences water pH and nitrogen concentration which, in turn, impacts the ecosystem in the water body. By monitoring water quality and soil characteristics, along with land cover and atmosphere measurements, we can develop ways to lessen pollutants entering streams and improve aquatic ecosystems.

We can also examine differences in regional or spatial patterns of soil moisture changes. Because soil moisture is a function of precipitation, soil texture, infiltration rate, and local weather conditions, researchers focus in on larger patterns rather than the absolute values of the measurements. This effort is greatly enhanced when we're able to measure soil water content over large areas, with the ultimate goal of using remote-sensing data from satellites to reach global scales. The Soil Moisture Active Passive (SMAP) satellite mission is one such project designed to meet these goals.

However, in order to verify and calibrate these satellite measurements, soil moisture data must also be gathered from observers on the ground. This is where GLOBE students, teachers, and citizen scientists play an important role in this exciting scientific endeavor. By contributing to GLOBE’s soil moisture campaign, you're helping a global effort to better understand our Earth systems.

Learn more about the SMAP mission

To get an idea on how all these different environmental variables are incorporated into the soils bundle, check out the following case study trying to answer the question:

How does soil moisture vary in three different regions?

Different soils with the same porosity and the same amount of water present can vary significantly in the value of Soil Water Content, and understanding whether the values measured are reasonable or not is easier if the soil characterization protocols have been done for a horizon.

Soils are expected to show an increase in water content after a rain or during snowmelt, if the soil is not frozen or saturated. Soils gradually dry out during times with little or no precipitation. How the soil dries at different depths depends on the properties of the soil in each horizon. In some cases, water enters the soil from below, when the water table rises. The water content in these soils may be more variable lower in the soil profile than at the surface.

If it rains, some of the rainfall is expected to soak or infiltrate into the ground and increase soil moisture. This infiltration starts happening immediately and can continue for several hours if water continues to be available from a steady rain or puddles. If infiltration continues until all the pore space is filled, then the soil becomes saturated. Most soils drain rapidly, usually within hours or days. The field capacity of a soil is the amount of water a soil will hold without downward drainage or redistribution.

As the ground dries from evaporation and transpiration, soil moisture decreases slowly, with the soils closer to the surface usually drying faster than deeper soils. Soil moisture decreases from field capacity to a water content known as the wilting point, (the point at which the soil holds the water too tightly for plants to take it up). Depending on the soil properties, soil temperature, air temperature, and relative humidity, it may take from days to weeks for the wilting point to be reached. A general picture of how soil water content changes in a single horizon with time is illustrated in Figure 1, however, there are times when the actual data do not follow this pattern.

Moisture content is affected by rainfall variation and soil properties. In a soil profile some horizons retain more water and have a greater porosity than others, affecting the flow of water from one horizon to another.

For the first two schools, the classes chose to take weekly measurements for three months. In this case, the protocol calls for taking measurements during periods when the soil moisture is changing. The students in Valdres, Norway knew from experience that melting winter snow would result in wet soils initially, then drying out gradually as summer approaches. Of course, near-surface soil moisture can also increase during spring rains (as happened on May 28 and later in July).

The class in Norfork, Arkansas decided to take monthly measurements for 12 months to investigate the seasonal cycle of soil moisture in their area. Despite having precipitation off and on throughout the year, the soil moisture shows a gradual dry-down, particularly at the surface. The soil moisture at 10 cm shows less variation for most of the year.

All three of these are interesting data sets. Comparison with precipitation has helped explain some of the variability while applying basic climatic knowledge has helped explain some of the longer-term trends. Knowing the soil characterization properties (texture, bulk and particle density, etc.) helps scientists and students understand more about how water is moving or stored in the soil.

Soils are an essential component for life on Earth. They provide a medium for plant growth, habitat for many insects and other organisms, act as filtration systems for surface water, and serve as significant carbon reservoirs. Additionally, the soil moisture in the the top soil layers is a vital measurement for flood prediction, droughts, plant growth, and weather patterns. When big changes happen to any of the soil's characteristics, it can have significant consequences for all life.

Because soils can vary drastically from place to place, citizen scientists play an important role in piecing together a more thorough picture of our world's soil resources. In an effort to engage more GLOBE students and citizen scientists in the interaction of soils, the atmosphere, and the ecosystem at large, we've compiled a group of relevant GLOBE protocols and other scientific resource into the Soil Protocol Bundle .

Additional thanks to all the members of the GLOBE Science Working Group and Brian Campbell of NASA Wallop for improving the quality of the work.​​​​​​