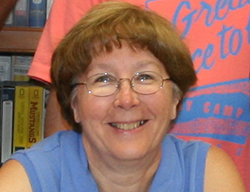 Diana R. Johns, a teacher of Advanced Placement Environmental Science (APES) at Crestwood High School in Dearborn Heights, Michigan USA, has been involved with GLOBE since 1995 and has influenced the path of many students over the years. Two of her students, 17 year-olds Ahmad Awada and Hussein Makki, recently earned first place at the GLOBE Student Research Exhibition for their research project "Correlations between vernal pool phenology and a breeding population of Bufo americanus (a species of toad) in Dearborn Heights, Michigan."

Ahmad is the President of the National Honor Society (NHS) and Hussein is the Director of Communications for the NHS chapter. Both are seniors at Crestwood High School. They had taken Ms. Johns' Advanced Placement Environmental Science (APES) class as sophomores and completing the course led to their interest in GLOBE. They started the program at the end of their sophomore year by setting up a weather station for air temperature and soil temperature measurements and got other students involved. 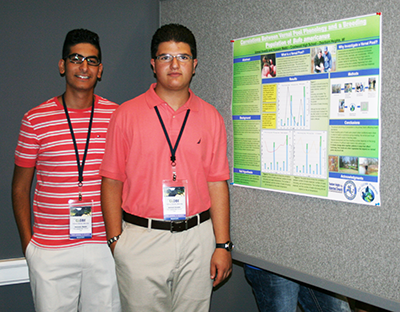 Because of their interest in APES and GLOBE hydrology protocols, Ahmad and Hussain were nominated and selected to be on the Watershed Stewards Commission for the city of Dearborn Heights. Through the commission, they learned about a vernal pool site at the southern tip of the city and decided to further investigate it. They chose the topic of Bufo americanus (the American toad) because the breeding of these toads can serve as a phenological marker for that site. 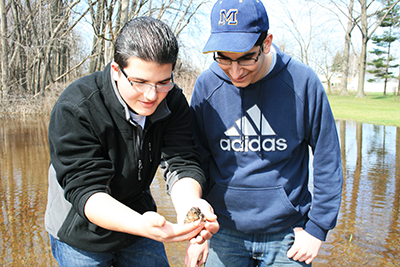 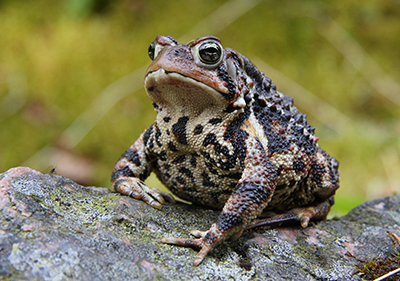 The null hypothesis was that there is no relationship between the onset of water flooding in a vernal pool, air and water temperature, precipitation, and the beginning of breeding in a population of Bufo americanus.  The site was monitored each afternoon after school at the same time for a month.  The project began in the spring when the vernal pool filled with water.  Once the vernal pool filled with water, daily measurements were made using GLOBE protocols of air and water temperature, wind speed, daily rainfall, barometric pressure, and the number of toads and chorusing toads present.  Conclusions of the research were as follows:

The topic was very important to the students because they wanted to inform the city council about the importance of the vernal pool to try to prevent the city from selling the site.  In photo below, Hussein and Ahmad meet with Dearborn Heights Mayor Pan Paletko and Barbara Goryca of the Watershed Council. The students will present their research, and its implications for city planning, at the next City Council in early December 2013. 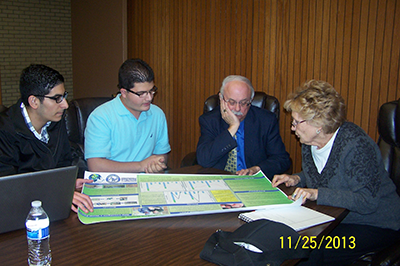 Both Ahmad and Hussain are aiming for careers in STEM. Ahmad is anticipating a career in Biomedical Science and Hussein is anticipating a career in Pharmacy. Their success can be linked to the dedication and enthusiasm of their teacher, Ms. Johns teaches five sections of the Advanced Placement Environmental Science course every day. "We don't just take the most academically able students in this course, instead - we "stretch" many different student populations and work with them closely to assure their success," says Johns.  "A few years ago, when our school was chosen to be part of Wayne RESA's ICCARS program with David Bydlowski and Andy Henry, our school really got active in GLOBE. It reinvigorated my students and they began to be passionate about making measurements and reporting them to GLOBE.  Climate change has really lit a fire underneath them (no climate pun intended!)."

Ms. Johns has been a part of the From Learning to Research (L2R) community for the past two years and declares that it has been a phenomenal experience for her as an educator.

L2R was an NSF-ITEST funded project that sought to develop a model for successful teacher-scientist-student interaction in the development of a locally relevant climate project.  After a summer professional development institute, teachers worked with scientists and L2R staff to create a climate project with their students.  At the end of the school year, students presented their climate projects at a virtual student conference, which was judged by scientists from the GLOBE International Scientist Network.

"I've been challenged to stretch myself and my students to do "real science".  I currently have several groups of students doing their own projects using local GLOBE data - one group is researching black carbon and another group is researching bat activity.  I've appreciated the opportunity to interact with educators from all over the U.S. and world. At the Annual Conference this past summer I met (and made friends and professional contacts with) educators from Germany, Pakistan, Thailand, and many others.  I am even more motivated to increase my students' involvement in GLOBE.  I also really enjoyed visiting the Goddard Space Flight Center and interacting with the scientists there - it was an opportunity both I and my students will not forget anytime soon!"