Jump to:   Why study land cover?  -- Why does NASA want this information? -- Example of Satellite Data About Forests --  Quick Facts About Land Cover -- Publications related to GLOBE Land Cover data 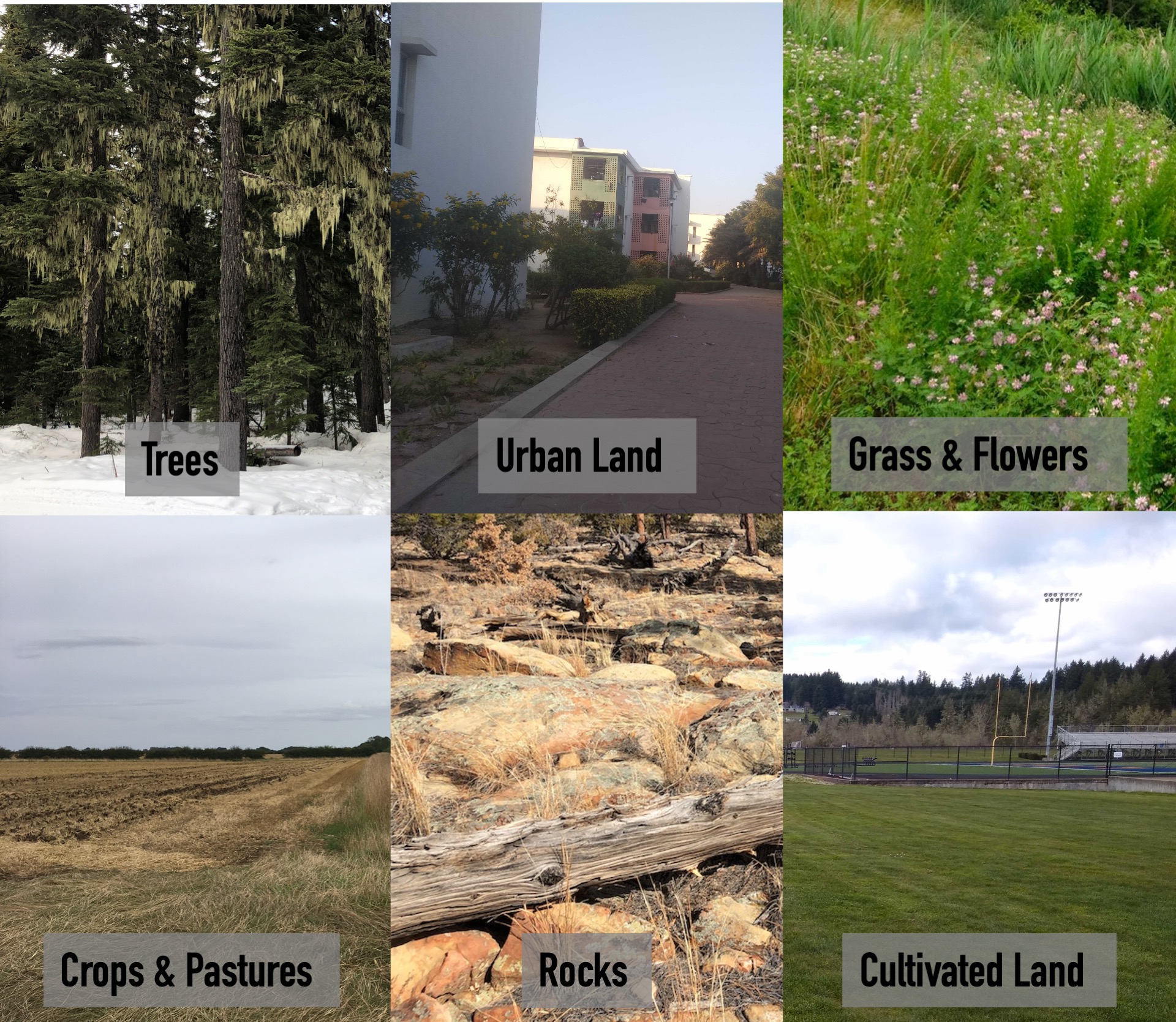 Nearly every aspect of our lives is fundamentally tied to the land on which we live. The homes that shelter us are resting on the land. Cities offer locations that bring people together; farms feed us; forests help to keep us cool, provide us with oxygen, building materials, and the joys of recreation; rivers and lakes yield fresh water to drink; and different kinds of land cover provide habitats for a diversity of wildlife. When land cover changes, our health and well-being, economies, and environments can all be affected.

Land cover is a general term used to describe what is on the ground covering the land. Land cover exerts influence on weather, soil properties, and water chemistry. Different land cover types are all distinct in their effects on the flow of energy, water and various chemicals between the air and surface soil. Land cover influences the way water flows or is absorbed, potentially leading to floods or landslides. Changes in land cover matter because land cover can alter temperatures and rainfall patterns. Some types of land cover absorb carbon from the atmosphere, and when subject to changes, such as a forest burned in a wildfire, result in more carbon entering the atmosphere. Improved land cover maps will provide a better baseline to study all of these factors at both global and local scales, particularly as scientists integrate improved land cover maps into global models.

Land cover includes both developed and natural areas. All living things depend on their habitat, or land cover, for survival. They find shelter, food, and protection there. Land cover has a direct effect on the kinds of animals that will likely inhabit an area. Therefore, land cover is of great interest to ecologists, who study how plants and animals relate to their environment.

Land cover plays a big role in a community’s vulnerability to wildfire. Homes and businesses built in a landscape prone to fire are at risk of being destroyed in a wildfire. Fire agencies recommend fire buffer zones with land cover that is not highly flammable.

Understanding exactly how much land cover change influences floods is a question of scientific research. In general, land cover influences the way water flows across the land. When cement or even packed soil replaces a forest or wetland, water flows across the surface as run off instead of being absorbed. This change could alter the flow of rivers and/or trigger flash-flooding. 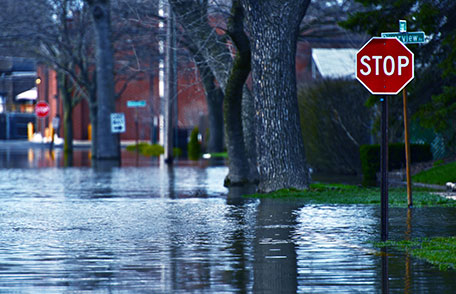 Water that flows over certain land cover types can pick up pollutants that impact a community’s water quality. Water running over cultivated land, like lawns or farms, carries fertilizers to rivers and streams. Water run-off over cement, roads, and industrial areas picks up oil, fuel, and other chemicals. Chemicals in run-off can build up in water bodies, leading to algal blooms and associated low-oxygen dead zones and generally poor water quality. This Landsat image shows an algal bloom in Lake Erie from September 2017. 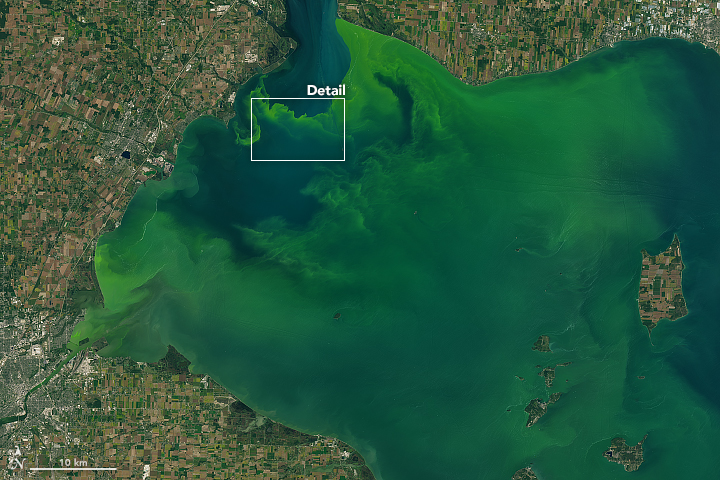 Land cover is a factor in making a slope prone to landslides. In particular, trees anchor soil, so a hill that has been cleared has a higher risk of slipping than one that has not. Bare ground, especially recently burned ground, is also more prone to erosion, which can lead to landslides. 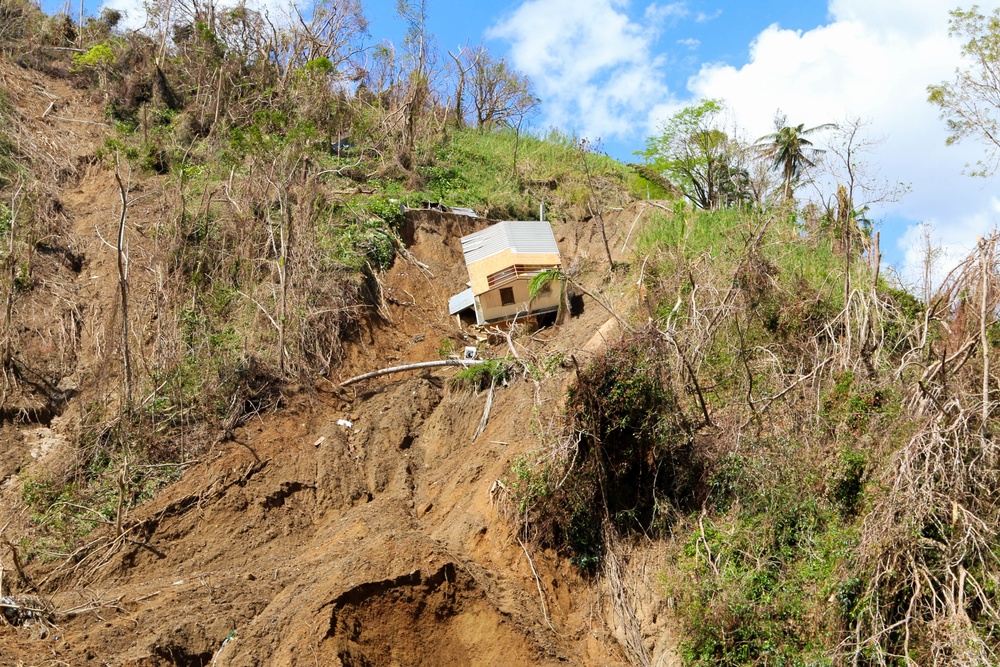 Land Cover and the Carbon Cycle 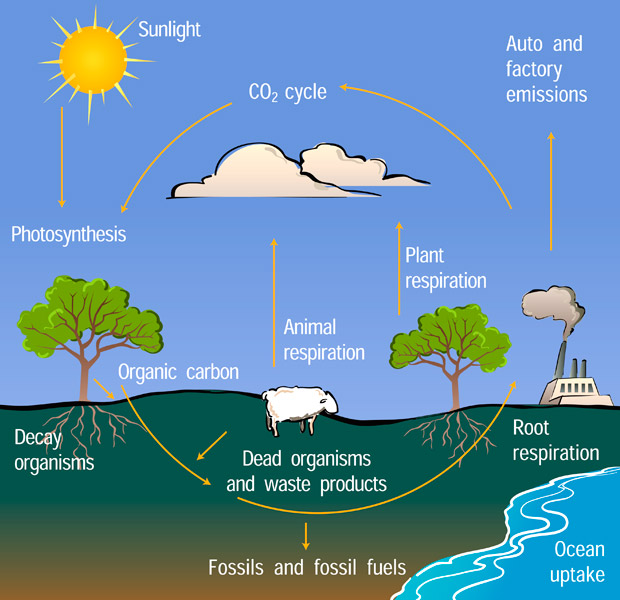 Land Cover and the Water Cycle

Land cover plays a role in several aspects of the water cycle. Plants absorb water from the soil and transpire water vapor to the atmosphere. Solid surfaces like rock or paved areas allow water to run across the surface, while soil and plant-covered areas tend to absorb water. A change in land cover can change how much water is absorbed into the ground vs how much flows into rivers. 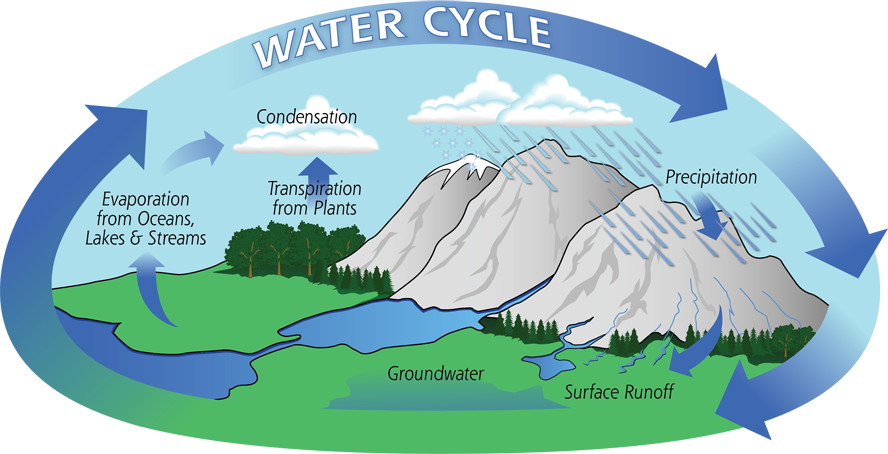 Plant-covered land is usually cooler than other kinds of land cover. Energy from the Sun heats the surface, but plants take in that energy along water and carbon to produce food through photosynthesis. That means that plant-covered land doesn’t heat up as much as other surfaces. Plants also release water vapor and oxygen as a part of photosynthesis. Just as misters cool you off on a hot summer day, the water vapor cools the land and air.

Different materials absorb sunlight and radiate heat in different ways. Materials used in cities or residential areas, such as cement, metal, and asphalt, radiate more heat than plant-based land cover. As a result, cities can be as much as 8 degrees warmer than suburban or natural landscapes, a phenomenon known as urban heat island. This image was made from Landsat-7 satellite observations. It shows Atlanta in photo-like natural color (top) and as a heat map. The cement-colored city is much warmer than the surrounding area. Urban heating is great enough to influence rainfall patterns. 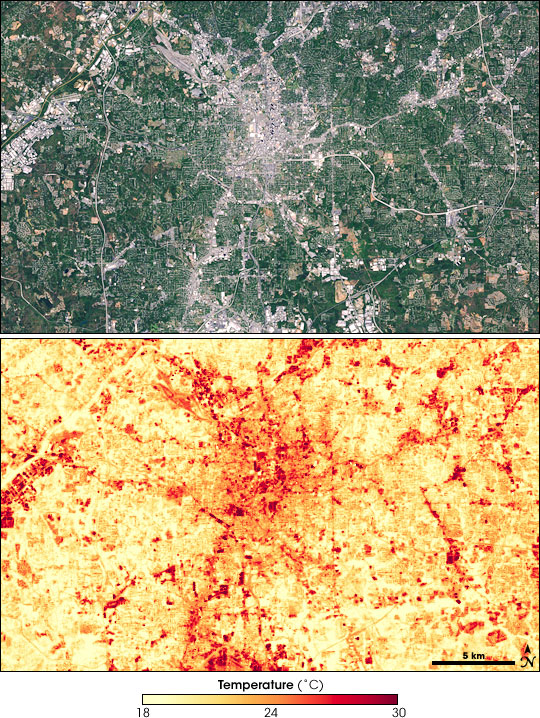 Why does NASA want this information? 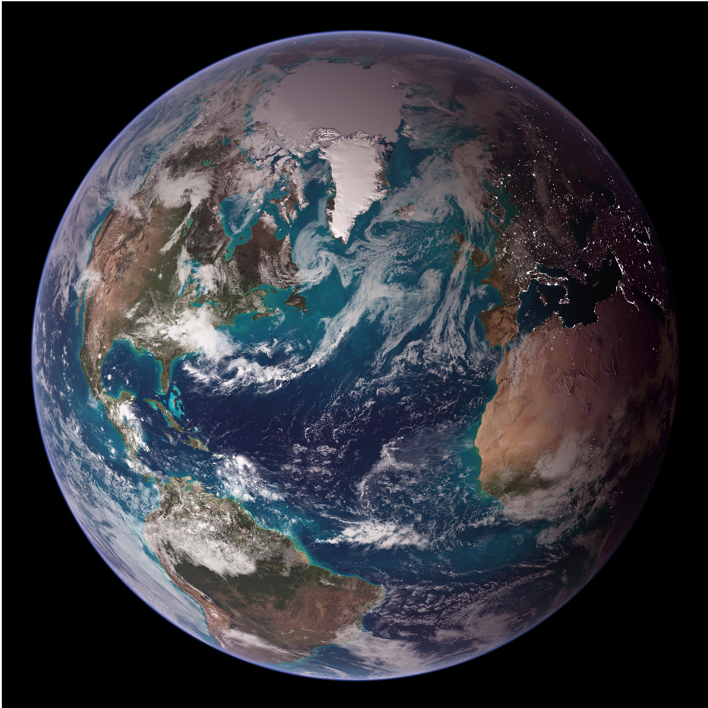 For years, scientists across the world have been mapping changes in the landscape to prevent future disasters, monitor natural resources, and collect information on the environment. The most efficient way to map land cover is from space. By using such imaging satellites as Landsat

, scientists have the ability to observe large tracts of the Earth's surface in a fraction of the time needed to complete aerial or ground surveys.

Satellites measure the amount of energy reflected by the Earth’s surface in multiple regions of the electromagnetic spectrum, including regions beyond what the human eye can see. Collecting this data over time can help us document the changes taking place. Satellites can be our “eyes” in the sky (or orbit). Remote sensing in space has the great advantages of being able to cover very large areas quickly and to revisit the same area frequently. However, some of the detail that can be seen at ground level may not be detected by a remote sensing system. Therefore, there is a need for actual ground observations to accompany these data. Ground observations, such as those using the GLOBE Observer: Land Cover tool and other GLOBE Biosphere protocols, can provide reference data to help scientists interpret satellite data, improving the accuracy of maps created from remote sensing data and other products.

The most detailed satellite-based maps of global land cover are on the order of hundreds of meters per pixel, which means that small details may not show up. For example, a park in a city may be too small to show up on the global map. The Land Cover tool (also known as Adopt-a-Pixel) provides ground-based comparison data for such land cover maps, among other purposes, through photographs taken with a smartphone or other device, as well as classifications by citizen science observers of the types of land cover they see in those images.

Data from satellites are recorded and converted into digital images composed of picture elements (pixels) arranged in columns and rows. Different satellites have different sizes of pixel. For example, the pixels from Landsat

​​​​satellite observations cover an area of about 30m by 30m of the Earth’s surface (about the size of a baseball diamond, see image below), while the Moderate Resolution Imaging Spectroradiometer (MODIS)

satellites has a pixel size of up to 250m by 250m for measurements in the visible range of the spectrum. Both Landsat and MODIS data can be used to derive a satellite-based map of land cover. 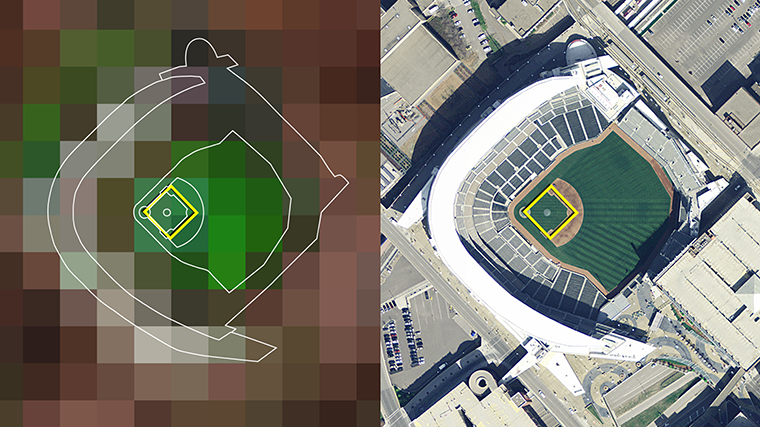 data, divides land cover into 17 different categories, such as cities, farm lands, forests, deserts, and so forth. The different colors on this map show the locations of each type of land surface. Scientists are monitoring how these land cover types change over time.

For the North American Forest Dynamics study, scientists combined 25 years of satellite data from the joint U.S. Geological Survey/NASA Landsat satellite program with information from the U.S. Forest Service to highlight where forest canopy was disturbed. This video shows how annual maps of the lower-48 United States produced from satellite data illustrate how these dynamic systems changed from 1986-2010. Logging and hurricanes play a significant role in the Southeast, and fires and insect invasion damage forest canopy in the West.

Why do scientists study land cover?

Scientists and land managers must have accurate pictures of the land and how it’s changing in order to understand and manage the land. Land cover data gathered by satellites and other means helps provides a big-picture, long-term view. Comparing land cover data from one year to the next helps people evaluate how a community’s past land management efforts are working and can provide valuable information on trends to help in planning for the future.

Land cover is part of Earth systems that work together like cogs in an engine.

What do scientists do with my observations?

Scientists compare citizens’ observations with the data from remote sensing satellites. This way scientists and others can improve the accuracy of their assessments and improve maps of current conditions and past changes. The data also helps to project conditions of the land in the future.

How do scientists use satellites to study land cover?

Land cover studies are part of a broad program by NASA to monitor Earth’s vital signs from land, air and space using an array of satellites and instruments on the International Space Station to better understand our home planet. The agency tackles some of the biggest challenges facing our planet today and in the future, including natural disasters, the availability of natural resources, rising sea levels and climate change. NASA’s planetary perspective means that we study the systems that work together to sustain life on Earth.

Land cover maps can be created with data from many different satellite sensors, including MODIS and Landsat. Satellite-based land cover maps are combined with ground-based observations and models to study the location, extent, cause, processes, and consequences of change. See NASA’s Land Cover Land Use Change Program for details.

Are there different ways of classifying land cover?

Land cover types are simply categories of landscapes that scientists are trying to map for different kinds of studies. Because the scientific questions being asked are different from one another, the ways scientists categorize landscapes are different from one another; they can vary from study to study and map to map. For example, for flood maps there may be only two categories–dry land and wet land–while the MODIS global land cover map may have seventeen categories including closed shrub lands, savannas, evergreen needle leaf forest, urban areas, and ice/snow. The only requirement for any land cover category is that it have a distinct spectral signature that a satellite can record.

The several classes of land cover in GLOBE Observer were chosen to work well for most needs of scientists who work with the land cover data collected by Landsat instruments and by NASA’s Moderate Resolution Imaging Spectroradiometer (MODIS). They also align with land cover classes used in the GLOBE Program.

What’s the difference between land cover and land use?

The two terms land cover and land use are often used interchangeably, but in fact land cover refers to what covers the surface of the Earth, whether it is vegetation (such as grasses, shrubs, forests, agricultural crops), pavement, buildings, or bare ground. Land use refers to how the land is being used—whether for agricultural, recreational, residential, commercial, or industrial purposes. The same types of cover can be managed or used very differently.

GLOBE Observer and the GO on a Trail Data Challenge: A Citizen Science Approach to Generating a Global Land Cover Land Use Reference Dataset 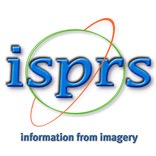 Can an App Change How You See the World? GLOBE Observer for Interpreters