The Pacific U.S. GLOBE Student Research Symposium took place on 18-19 May, 2018. The event was hosted by Tracy Ostrom, WestED/CCASN, at NASA Ames in Mountain View, California. 72 Students and 20 GLOBE teachers and science mentors from California attended, with the students presenting a total of 23 GLOBE research projects in a poster presentation session. Student projects were reviewed both by their peers and by local scientists.

Representatives from three GLOBE Partnerships, including WestEd/CCASN, Elkhorn Slough and NASA JPL assisted in making the event a success. NASA Ames hosts checked students and their teachers into the facility on Friday, May 18th, followed by a pizza lunch. NASA Ames Center Director, Eugene Tu, welcomed all and created an atmosphere of excitement and anticipation. Students and teachers toured NASA’s giant wind tunnel, discovery lab, computer lab and spheres lab that afternoon before engaging in an icebreaker activity led by Peggy Foletta of the Elkhorn Slough GLOBE partnership.  Friday night ended with an an opening dinner and keynote speaker, NASA Scientist Chris Potter. Potter discussed how satellite visualization and ground truthing data performed through GLOBE protocols helps his research on climate in both California and Alaska.

Students stayed overnight in NASA lodging and began setting up their posters between bites of breakfast and practicing their presentations on Saturday May 19th.

The morning kicked off with peer reviews of the posters followed by professional review. Reviewers were composed of local NASA and professional scientists and science educators.

While the students spoke with scientists about their research, teachers and mentors participated in a Carbon Cycle training facilitated by Jennifer Bourgeault, U.S. GLOBE Country Coordinator from the University of New Hampshire Leitzel Center.

At noon, both students and teachers/mentors enjoyed some down-time eating their boxed lunches outside of the event center and a group photo was taken next to the the NASA shuttle replica. They also had a chance to visit NASA’s gift shop and visitor’s center. While in the visitor center, Ali Guarneros Luna shared her career path from Mexican immigrant  to NASA Ames aerospace engineer.  This was a particular highlight for students.

While students were learning about aerospace engineering and participating in activities, reviewers described their feedback for each poster they reviewed and shared their student conversations with the team. Many reviewers went back to the posters to take an additional look. 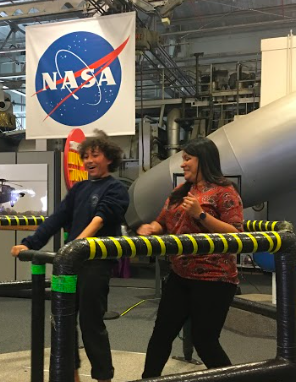 A recognition and closing took place when the students returned to the event center.  Each of the 23 projects were recognized by the individual reviewers. The project name, school and student names were announced along with at least one highlight of the poster.  Seven posters were given additional recognition for excellence in an area of scientific research.

Autumn Burdick from SSAI/GLOBE captured the review sessions and student experience through Facebook Live videos.  You can also check out photos taken by Autumn and Amy Barfield (GIO) during the event, here.

The Pacific SRS agenda is available here, and check out the SRS media page for photo highlights of the event.