GLOBE Master Trainer Peter Schmidt knows GLOBE. After all, he's been involved with the Program since 1997.

Currently, Schmidt is the Principal Investigator (PI) and primary author of a 1.4 million dollar grant awarded in October 2012 by the National Oceanic and Atmospheric Administration (NOAA). The grant, a part of NOAA's Environmental Literacy program, goes to Queens College of the City University of New York, where Schmidt works as Associate Director of the Consolidated Edison-Queens College GLOBE NY Metro partnership and will fund a project called "Into the Woods" (ITW). At the heart of the four-year project is the belief that the foundations of environmental literacy need to be set at a young age and be based on regular and positive outdoor experiences with the natural world.

Schmidt came to Queens College in 1979 as an instructor at the College's environmental field station and became director of the Center and its environmental education programs in 1989. After learning about the GLOBE program, he pursued a partnership so that he could offer teacher training in GLOBE at the field station.  "I was unaware that at the same time Allan Ludman was looking for a program that would improve the science background of the New York City High School graduates that came to Queens College and was also talking to GLOBE about a partnership. After learning about each other's plans we joined forces." said Schmidt.

Elementary teachers in second through fifth grade are the prime target for the ITW program. Through a series of workshops extending over the full four years of the grant, Schmidt and the staff of GLOBE (in the NY Metro area) will be working with teachers to develop the skills needed to use natural outdoor areas near their schools as a regular extension of their classroom. Recognizing that there is often little time left in the school day for new or extracurricular activities, a major priority is working to identify topics and subjects currently being taught in the classroom that could be better taught outdoors.

Teacher training began with an opening three-day workshop based mostly on Elementary GLOBE. Teachers learn to become comfortable with the five GLOBE storybooks and see immediate applications in their current teaching. Next, they are taught how to use the books as a guide for integrating inquiry strategies and outdoor experiences into their classes. The stories become reality as Schmidt and his staff take teachers to the Bronx River after reading Discoveries at Willow Creek, and turn them into soil detectives after reading The Scoop on Soils. Ten of the 11 workshop days in the first year involve extensive outdoor exploration of natural areas throughout New York City.In addition to the workshops, GLOBE NY Metro staff will be available to guide the teachers' initial outdoor trips and later provide moral support and extra technical assistance, as the teachers take on more of the lead role in guiding field trips.

As Director of GLOBE NY Metro Ludman was initially actively involved in the "Into the Woods" Project, supplying initial guidance and regular proposal editing. However, he was recently appointed Chairman of the School of Earth and Environmental Sciences and his added responsibilities have necessitated a reduction in his involvement in the project. Ludman and Schmidt maintain a close working relationship, nonetheless.

Schmidt and his group have also partnered with the Dr. Mary Leou at NYU's Wallerstein Collaborative to help teachers learn how to plan and implement environmentally based service learning projects that fit into their existing curriculum. Training in GLOBE protocols will be added later for teachers to use as tools to get students involved in long-term authentic research in local parks and natural areas. There will be a GLOBE science and art symposium held on the Queens College campus each year for participating classes to show off their work.

Past projects that Schmidt has found meaningful and rewarding include: 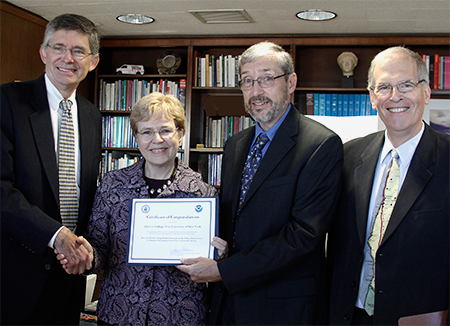 Clearly, Schmidt has been committed to making GLOBE a part of his everyday persona and professional life. When asked why students should become involved with GLOBE, Schmidt responds directly: "In the short term the answer is easy, it's fun and personally rewarding. In the long term, involvement with GLOBE opens up career options that a student may not have considered, it helps build discipline that is valuable in any endeavor and generally helps the student make stronger connections to the local community and larger global."