For GLOBE teacher Diana Johns, every day is Earth Day

In the spring of 2017, The GLOBE Program, an international science and education program sponsored by NASA, and supported by the National Oceanographic and Atmospheric Administration (NOAA), the National Science Foundation (NSF), and the U.S. Department of State (DoS), held six regional Student Research Symposia (SRS) where GLOBE data-collection protocols were used.

In this series of feature stories, we are able to see some of the teacher/student teams who were present at these symposia.

It’s hard to believe that in the early 1970s, the environmental movement was strong and popular—and largely unchallenged, except by corporations responsible for air, ground, and water pollution. John Denver’s anthems to the mountains and the skies were chart-topping hits. And the very first Earth Day, on April 20, 1970, became a perennial day of celebration and activism.

“What put me on the path to where I am today,” said Diana Johns, science teacher at Crestwood High School in Michigan, “was that first Earth Day. About ten of us, high school juniors, organized activities for it. We saw something we could do. We got them to shut down the whole school in terms of regular academics for the day to do something environmentally related. That day led to my major in college,” and, she would add, 43 years of teaching science. 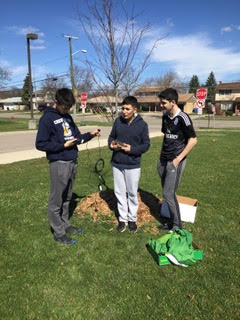 However, some would counter that Diana’s close ties to the natural world—which led her to become associated with GLOBE as a teacher and advocate in its earliest days—go back further. David Bydlowski, who has worked with Diana for decades as a GLOBE Partner and liaison, notes that she has a powerful connection to nature. Even outside the classroom, she helps her students understand natural cycles and the lives of animals in rural Michigan.

“She’s always been a teacher who gets her kids outside,” said David. “She gets them to do hands-on science not just in her school but in the community. Students would do projects where they might need to find a particular animal and study its characteristics.” Diana, he said, knows just where to find what they need.

Not that Crestwood High sits in an environmental wonderland. “We’re a suburban high school that’s grown a lot in recent years, with 1,400 students designed for 1,200,” Diana said. “It’s a good thing we like each other!” As a suburb of Detroit, Dearborn Heights has “more houses than trees…open, flat, with no bodies of water.” That requires Diana—who primarily teaches advanced placement environmental science—to get creative about connecting students with nature to employ GLOBE protocols and equipment.

“Our kids built a pond inside one of our courtyards, turning it into a living laboratory,” she said. “They’re making pollinator plants and edible gardening, some of which get dispersed out into the community.”

“We’ve been doing GLOBE for quite a few years,” said Diana. “For kids who couldn’t 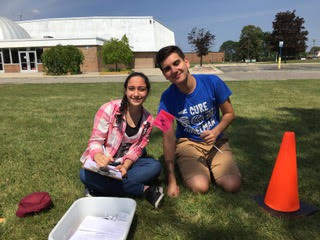 make a connection strictly with content, once they had a chance to go out and make observations, collect data…it helps them think a lot, plan, and coordinate.” Diana treats GLOBE not as a separate add-on project—it’s integrated into her existing curricula and standards. “A strength is the association with NASA. It’s a real draw for kids. They see it as not just some silly reason to go out and collect data…it has a bigger purpose.”

While Diana and her students have done some work with the GLOBE hydrology protocols, it’s difficult because the closest water is a river five miles away, “and kids don’t drive like they used to.” She has focused more on GLOBE’s atmospheric and aerosol protocols, preferring study that “is a little more rigorous…at the high school level, it has to feel more meaningful.”

The aerosol work has given her students a chance to talk with other scientists around the United States. “One of my students got to be a representative down at NASA to discuss aerosol data. Another talked about this work with admissions officers at Stanford and MIT…that’s how much GLOBE has really resonated with these kids. It’s part of their DNA. All of our students participate by collecting data, but for some at the higher levels, GLOBE is the keystone of their science experience in high school.”

Students feel excited when they realize some of the data they collect and analyze could be shared with Michigan’s Department of Natural Resources. “They see that what they’re collecting can be useful to people in the seats making decisions,” Diana said.

Real environmental events have given Diana a chance to make science study even more concrete. “Using photometers, students measured aerosol particles of soot in the atmosphere from forest fires burning out west. We’re just beginning to learn how fires impact climate change. When we were overseas at a GLOBE event in India a few years ago, we got a chance to see the instrumentation they use in Europe, so we ordered a photometer from France to use in our school.”

Last summer’s eclipse, which put Diana’s school in the 80 percent totality band, resulted in a project her students submitted this spring to the International Virtual Science Symposium. “We have all this data collected during the eclipse on surface temperature, air temperature, observations on binder plants and weeds as they opened and closed in response to the light.”

Taking their projects on the road

Nine students accompanied Diana to the GLOBE Midwest Research Symposium at Purdue University last spring. “I had never been before…Purdue is like space central in terms of astronauts who went there.” In addition to getting the “college experience”—a full tour, eating college food, visiting the bookstore, sitting in a lecture hall—the nine students, in three teams, got a chance to present their GLOBE projects to scientists, local teachers, and students from other schools. “It was so much fun for them,” Diana said. “At meals, scientists came and sat to talk with the kids. The students could show their enthusiasm, be articulate, poised, and confident…to show off something you spent months on and give their ‘elevator talk’ in just a few seconds.”

For their effort and excellence, the Crestwood students came home with recognition from the symposium. Two of those students, Ali and Sara, both 16 years old, explained how their presentation focused on aerosol data that examined the correlation between barometric pressure and sulfate particles. “We decided to find out how our data compared with a school at a similar latitude in Croatia,” Sara said. So, online, they researched other schools who were collecting particulate data and incorporated it into their analysis.

“We brought a poster with us to show the reviewers how we came to our conclusions,” said Ali, “and also brought a graph of a fire in Canada a year before to see how it affected aerosols.”

As Sara and Ali enter their senior year, Ali is looking at STEM study (probably engineering or chemistry) at the University of Michigan and Sara is considering mathematics (“but after GLOBE, I want to make sure I incorporate science into it…GLOBE changed my mind about that,” she said).

Diana explained that Crestwood has capstone projects for their seniors, who invariably choose environmental topics. “It’s in the forefront of their minds, a theme that follows them all through high school and into college. Kids email me when a college teacher mentions something about hands-on science. Because of GLOBE, a lot of my students have chosen related pathways in college.”

Their longer concerns are also in view: Said Ali, “I think that more needs to be done to stop rising temperatures. Our current leaders are not doing enough.” Sara agreed: “We just researched aerosols and it shows a need to call attention to serious problems. We have to do something. We have one planet.”

Before college, though, GLOBE has plenty more to offer Diana and her students. Teams will be attending this year’s symposium (the midwestern event for 2018 is happening in Detroit), and Diana will be taking a small group this July to Killarney, Ireland for the GLOBE Learning Expedition. “The school administration had turned down two other international trips requested by other groups this year, but when we presented our GLOBE work, and they heard how the kids spoke about their GLOBE experience, the school board couldn’t wait to tell them they could go,” Diana said.

As one of the first educators to be trained by GLOBE in the mid-90s, Diana has benefited from, and greatly enjoyed, her partnership with David Bydlowski, who works as a science consultant at the Wayne RESA (a regional educational service agency that provides support in the sciences). David also locally leads two exciting NASA-projects (the AREN Project). One relates to aeropods—kites and weather instruments that carry sensors and cameras up to 1,000 feet to study the atmosphere. The second involves rovers, or remote-controlled boats, carrying sensors and cameras that give students the opportunity to study lakes and rivers beyond the shoreline. 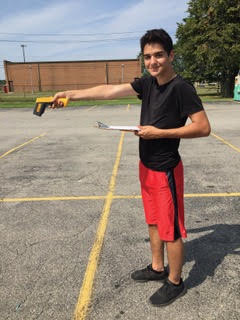 GLOBE pairs every teacher with a representative like David from a college/university or other local or regional science organization as a means of support and bridge-building.  “When I first started out, we had to string wires through the ceilings for the phones and modems to work,” Diana recalled. David has worked with her from those very early days, helping her acquire grants and equipment, providing guidance and advice on how to access resources, and being a good friend to both teacher and students as they work to integrate GLOBE thinking and protocols into daily learning.

“Diana and I go back a long time,” said David. Beginning with a water quality monitoring program and the Rouge River education program, the connection with Diana has been “a natural.”

“We just celebrated our 25th year with the Rouge River project, but we’ve known each other 40-some years. As a teacher, she’s exemplary, just outstanding. One thing that really impresses me is that when we get older, a lot of people take the easy track in life. With Diana, her enthusiasm is as great as it ever was. Her rapport with students is exceptional and she is a very, very caring person.”

One of the characteristics of GLOBE, David said, is caring about both the environment and the people who are in it. “It’s a kind of laid back sort of trait,” which absolutely describes Diana. David states that the culture at Crestwood High School has changed over the years and the school is steadily moving to exemplary status academically. “Diana has had a lot to do with that. It’s impressive to see a person who’s gone through a change like this in a school district. She’s a rock, really accepting of change.”

He adds that Diana has become an enthusiastic leader in the broader GLOBE community as well. “She’s a real leader, bringing a lot of leadership skills to help others get involved in GLOBE.”

Said Diana about David, “He’s phenomenal, always able to provide resources to collect data…and some of this equipment is very expensive. He goes above and beyond for us. He takes the time and effort to make the kids a real priority and it makes a world of difference.

‘He gets everybody fired up—students and teachers both.”

The GLOBE Program sponsored six 2018 Student Research Symposia funded by NASA Grant No. 80NSC18K0135.  For information on these, visit the 2018 Symposia pages. Bookmark the SRS webpage to stay updated on dates, locations, and application procedures for 2019.