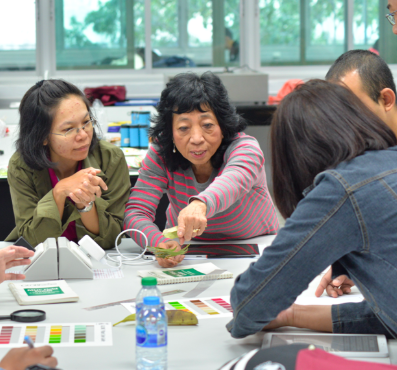 In truth, there are no final frontiers. Challenges—scientific and humanistic—emerge every day, calling for explorers to study, commit, and forge new understanding.

For more than 40 years, Dr. Elena Bautista Sparrow of the University of Alaska/Fairbanks has braved two frontiers: the study of global climate from the perspective of her home in the Arctic, and the expansion of opportunities for girls and young women to become the scientists they were meant to be.

Thirty-eight years ago, when she was a five-year-old kindergartener, Katie Spellman entered her first science fair project—How Do Colors Blend—in her hometown of Fairbanks. “It was about mixing Play-Doh together, I was really into it,” said Katie. Elena Sparrow, a neighbor, family friend, fellow churchgoer, and science cheerleader, organized that science fair, at both the district and state levels. “She gets a crew of women to evaluate all 400 science projects in the state,” Katie said. “When they picked my project and I got to go onstage, I was so excited. My mom whispered to me, ‘Dr. Sparrow thinks you could be a scientist.’”

“It was a pivotal moment for me,” said Katie, but just the beginning of a lifelong friendship and mentorship. As her project went on to win the statewide kindergarten first place award, Dr. Sparrow saw something worth nurturing in Katie. “My very first memories of her are when I was big enough to sing in the church choir, which she directed. She has a contagious enthusiasm, the kind of person who is always dancing and laughing. People would never guess she was a scientist.”

“When I went to college, I felt like social science was absent in STEM and Elena was always here to support people with STEM and social justice,” Katie said. “She was one of the principal investigators on an NSF program when I was in grad school…we worked in classrooms to communicate effectively the same way she does, to motivate, and show that girls can make a difference using science.”

Katie shifted her focus to ecology with emphases on education and social justice, enjoying Elena’s constant support. “Elena was at my Ph.D. defense and right after, she said, hey, write this proposal to NASA with me. It will keep you in Fairbanks and give us $3.5 million to help communities use GLOBE to solve their own problems.”

Now the two work side-by-side at the University of Alaska, Elena as Education Outreach Director of the International Arctic Research Center (IARC) and a research professor at the School of Natural Resources at Cooperative Extension, and Katie as a research assistant professor. They collaborate on current GLOBE projects such as the Arctic and Earth SIGNs Program, which uses GLOBE and NASA assets to empower young people in Alaskan communities to tackle climate change issues close to them and their elders.

Katie is just one of thousands of young women who have flourished under Elena’s mentorship, work that brought Elena national attention recently with the Presidential Award for Excellence in Science, Mathematics, and Engineering Mentoring, jointly given by the White House Office of Science and Technology Policy and the National Science Foundation. (The award was given to one individual in each U.S. state and territory.)

Not surprisingly, Elena was nominated by Katie for the honor.

Mud pies in the Philippines

Long before her Ph.D. in agronomy and soil microbiology, Elena Sparrow got her hands dirty early. Born in the Philippines, “I was always playing in the garden and the soil,” she said. “We were poor, my mom raised us as a single mother with six kids. But she said if I give you an education, you can be anything you want. I wanted to help people, to be helpful to the world.”

Elena calls her mother her first mentor. “She was intelligent, sharp, and caring. I learned a lot about mentoring from her, not just the intellectual, but caring for the whole person, helping them not just in school but in their lives.”

Realizing early on that the family couldn’t afford to put Elena through medical school, her first preference, Elena looked to the college of agriculture and forestry at the University of the Philippines. “I said, OK, if I can’t go the medical route, what other ways can I help?” Her undergraduate thesis advisor, Dr. Conchita Valera, also born in the Philippines, came home to support young female students after receiving her Ph.D. at Cornell and guided Elena toward a major in soil science and microbiology.

While building an impressive list of appointments, presentations, and awards, Elena’s path brought her to the GLOBE Program in the early 90s. “I came to GLOBE when I was on a team when climate change was starting to become an important issue but was still a bad word,” Elena explained. “Each state team had three educators and a scientist, and I was asked to be the scientist on the Alaska team. We were tasked with figuring out how to communicate and educate people about climate change.

“Our team decided our approach would be through working with K-12 students. We figured if they could understand this, they could take it home to their parents and they might pay attention to it. We got $10,000 in seed money from NSF to look at many different program options. GLOBE impressed us. It focused on increasing the ability of students to collect data, make decisions, conduct investigations, and contribute what they learn to ongoing investigations.”

After her GLOBE training in Arizona in 1996, Elena was faced with implementing a program for which she had no funds. “We did not have any money at all. So we got a small grant to buy some supplies and bring in somebody who could help me run a GLOBE workshop. We hit the big time when we got a $24,000 grant from the EPA which connected us through videoconferencing to Anchorage, Juneau, and Barrow.”

With the daunting size of the state, Elena looked for more solutions to close the distance. “We started building a network. We had a master teacher in every place who learned from scientists.” Elena instituted two-week summer institutes and follow-up workshops (“we had money for them to travel but not for us to travel”). “The one-to-one is very important, and we can do that near Fairbanks…we go to them to get them started, setting up their weather shelters. But it’s hard because the state is so big.”

A pivotal $350,000 grant to the university for plant phrenology studies marked a turning point for both Elena’s research and the integration of the GLOBE Program. “Because this was mainly a study about growing seasons, we realized the importance of using indigenous science and to explore how to make that work with western science and the GLOBE protocols,” Elena said. She found that community leaders embraced the GLOBE perspective. “We had elders come to our summer institutes,” Elena noted. “They said GLOBE is a good way of turning the attention of young people in villages back to the environment. Elders want their youth to learn what they know, how they do science and observe, but also want them to live in a blended world where we need to get along.”

The braiding, or weaving, of indigenous and western scientific approaches now informs Elena’s entire approach to research and teaching. At the GLOBE Learning Expedition event in Ireland this year, Elena brought a group of students and teacher from the Ket’acik Aapalluk Memorial School in the Yupik community of Kwethluk to share their story of using GLOBE technology and techniques in their study of the Arctic environment.

According to a story published by the International Arctic Research Center about the Alaskans’ trip to Ireland, the bank of the Kwethluk River bank is eroding and residents believe the loss of land equates to the loss of history. The students used GLOBE resources to investigate erosion and learned about the impact of soil moisture, vegetation, and boat anchoring.

“They had two culture nights where students came together from different nations to inform each other what it’s like where you come from. The students from our village wrote a song about their project and choreographed it and danced it. It was impressive…it was not only their project they were sharing, it was their lives and livelihoods,” said Elena.

Talking about the experience later, one of Elena’s students said she was “impressed by the scientists there and wanted to come back some day and attend as a NASA scientist.” Another said the Expedition had “given me the courage to be brave, to express who I am.”

The road to common scientific ground hasn’t been easy for Elena, who was rejected for grants on multiple occasions when words like “Native science”, “Native ways of knowing,” and “spirituality” were deemed illegitimate by proposal reviewers. The phrase “combining western science and Native observations” eventually passed muster.

With more than 20 years of GLOBE under her belt as mentor, teacher, and trainer of trainers, Elena has found she can influence the development of additional GLOBE resources to meet local needs. “A lot of the GLOBE protocols are useable here,” she said, “but we have specific issues. One of my NSF projects looked at the freeze up and break up of rivers, ponds, and lakes, but not the sea ice. We wanted it to be included in the GLOBE Teacher’s Guide, along with one on the freezing and thawing of soil. It’s important in Alaska because the layer that usually freezes is underlaid by permafrost, and it’s an important indicator of what’s happening to the permafrost if temperatures rise.”

Elena sees the development of environment-specific GLOBE protocols as another step in seeking consensus on climate change and how to combat it, which has become politically sensitive.

“How can we use education to arrive at common ground?” she asks. She believes it can happen by raising relevant issues of common concern. “Everyone is interested in work force development, productivity in the community, jobs…there are as many jobs in renewable energy as there are in fossil fuel, if not more. I’m trying to use key influential concerns, even in the faith community, which sometimes sees climate change as a belief. It’s not a belief, but the discussion challenges their belief system.”

Elena is hopeful. The Alaskan government and native governments are coordinating on joint climate action statements and looking for solutions. Elena recently attended the Fourth International Polar Year in Rhode Island, a conference that acknowledged the “human dimensions of social science and the inclusion of indigenous communities” in the research and discussion.

And day by day, Elena continues her mentoring work with the Bonanza Creek Long-Term Ecological Research site, the Alaska Established Program to Stimulate Competitive Research, a high school summer research internship program for rural Alaska students, the Experience Science, Expect a Challenge event for the Alaska Girl Scouts, the Association of Polar Early Career Scientists, and the National Association of Women in Science (which “is now opening up to anyone interested in supporting women in science, equity and opportunities, and equity in pay”).

And, as leaders beget leaders, Elena nurtures scientists like Katie Spellman, who is now a primary investigator on her own grant. “We have kids and adults all over the state of Alaska monitoring berries with us, a resource that’s changing a lot…the shifting length of season has something to do with it. This is a great way to encourage diversity in citizen science."

“Elena’s support has been critical for me,” Katie said. “I wouldn’t be here without it.”

More photos of Elena at work: