These Florida students have explored the rain forest of Costa Rica. They've collected data on that country's plants, leatherback sea turtles and insects. They've demonstrated GLOBE soil protocols to their student-colleagues at a Costa Rican GLOBE school. Back home, some developed their own science experiments. One captured honors at the county science fair. All the while, the fifth through eighth-grade students at the School in the Park in Sarasota, FL, have had GLOBE protocols and the scientific method at the forefront of their minds. 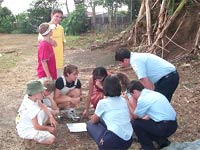 "We're using GLOBE protocols, even when we're not collecting GLOBE data for the web site," says School in the Park GLOBE teacher Nicole Park. "My students are getting so much from GLOBE. They're learning how to interpret data and apply critical thinking to other aspects of their schoolwork."

Park and her students traveled to Costa Rica to conduct GLOBE protocols, leatherback sea turtle research and gather data on reforestation. The students will be comparing atmosphere, hydrology and soil information from Costa Rica with data from the same measurements done at their study site in Sarasota.

At the end of their 11-day trip, they met with GLOBE students from Liceo de Poas in San Pedro de Poas, Alajuela, Costa Rica. Both schools value student-led research. With the help of bilingual guides, the teams conducted soil characterization protocols. "Now that we've met, we have plans to do some collaborative work," Park says. "Meeting each other and working together on GLOBE measurements was a really neat experience."

Park began incorporating GLOBE into her teaching just last September and she already has woven it tightly into her approach to education. "GLOBE is incredible because it really lends itself to the curriculum I'm writing. I use a hands-on approach and GLOBE helps me give it more depth and a global scope. The kids are starting to ask their own questions and develop their own science experiments, which is amazing," she says. "I'm not out there trying to find the best because I think GLOBE is the best."

Because the School in the Park sits just two blocks from the Gulf of Mexico, the students so far have focused much of their GLOBE work on a variety of hydrology studies. Joshua, a sixth-grade home-schooler who participates in Park's Investigative Science class, won first place in the Environmental Science category of the Sarasota County Science and Technology Fair.