Students Find GLOBE All Over

After just one year in the program, the Nancy Young Elementary School in, Aurora, IL, has neatly woven GLOBE into almost the school's entire fifth grade curriculum, including art, music and physical education!

In addition to science activities centered on GLOBE atmosphere protocols, fifth-graders have created GLOBE posters and written and performed songs and dances about GLOBE. 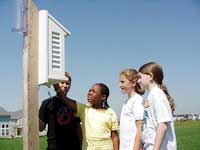 The Indian Prairie School District has been encouraging technology-based science curriculum, and the district and school administrations have broadly welcomed what the GLOBE Program offers.

"The level of enthusiasm and involvement the students had for the GLOBE Program far exceeded our expectations," said Principal Jenny Giambalvo. "It gave our 5th-graders an opportunity to make real-life connections to meteorology and the concepts involved in monitoring, measuring and predicting. It is just a great hands-on way to spark that interest in science." 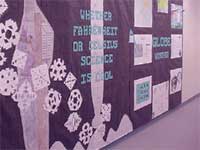 Several key factors helped the school embrace the program, said GLOBE Teacher Corinne Hannon. The school started with a GLOBE team that included two of the top science students from each of the school's four 5th-grade classes. The students spent two intensive weeks learning about GLOBE's atmosphere protocols and instruments. They now serve as team leaders when any of 12 GLOBE weather teams go outdoors.

That "GLOBE Time" starts with a five-minute weather lesson indoors and then observations outside. To expose younger students to some of GLOBE's observation, measurement and scientific method concepts, students from the lower grades sometimes join the fifth-grade GLOBE teams. After the observation period, the students recorded the data on computers. Some "GLOBE Time" is spent using computers to graph and analyze data.

Although focusing on the fifth grade, Young's GLOBE teachers have drawn the whole school into the program by offering news bulletins for major weather days, said Hannon. They also conduct school-wide trivia contests. The weekly winner is named an honorary GLOBE scientist and joins the GLOBE Team for a weather observation outing.

"The thing I like about this program is that we got to actually experiment with weather and not just learn about it," D.J, one of the fifth-graders, said. "Kids learn best when they can have a hands-on activity and not just read about it. Take it from a kid himself!"

Another student adds that GLOBE has helped with understanding the weather. "I like to go outside and look at the weather for myself instead of just listening to that ol' weatherman," the student said.