The rain in Maine falls mainly on...woodland, closed forest, apple orchards, and urban residential and transportation areas. You can see more precise landcover descriptions and classifications in the GLOBE database for that state, thanks to the efforts of recent GLOBE "MUC-a-thons" in Maine. A MUC-a-thon describes many students, teachers and schools coming together for large-scale landcover identification using the Modified UNESCO Classification (MUC) system. 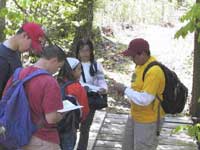 The Auburn Land Lab, a GLOBE site near Lake Auburn that lies in the southern part of the state a bit inland from the coast, spearheaded the event. GLOBE teachers and trainers prepared students and volunteers, met with area landowners to obtain permission to walk the land, and collected as many GPS units as possible for a MUC-a-thon. On a beautiful New England day, 250 students, accompanied by teachers, parents and community volunteers, trudged through forest, agricultural sites and towns, braving brambles and bugs.

"After being dropped off at the edge of a large apple orchard, five students and I settled down to the MUC-a-thon tasks," said Rick Shea, a GLOBE teacher at Sherwood Heights, describing the beginning of the day for his team. "We walked for about 100 meters into the orchard, and the breeze was making thousands of apple blossom petals float gently through the air."

At the end of the day, the well-trained groups had "MUCed" an impressive 159 land cover sites.

"Every child had a role on the team," said Patty Gaudreau, a GLOBE trainer and former GLOBE middle school science teacher who now works full time at the Land Lab. "Having multi-age groups was a real strength in working with this many students."

Shea agreed. "The younger boys in the group were willing to go through the blackberry thorns to put up the North, South, East, and West signs," he said. "An Auburn Middle School student was in charge of the MUC classification book and made sure everyone agreed before moving on. We nicknamed a high schooler 'Mama Jessica' because she had the students share parts of their lunch and wouldn't allow anyone making fun of anyone else."

Shea also noted that students realized some things in the field that weren't apparent in the classroom. "They were amazed how just a metal belt buckle can throw off a compass reading," he said. "And lunch quickly ended when we realized there were lots of wood ticks all over us - even with a lot of tick spray."

The Maine teachers are already planning for new MUC-a-thons in the spring. When preparing for a MUC-a-thon, there's plenty to do beginning in the fall and throughout the year, according to Jennifer L. Bourgeault of GLOBE's Land Cover/Biology Team.

Figuring out the boundaries of the MUC-a-thon area, and working with the community to get volunteers and permissions from landowners are time-consuming tasks. Students also need activities early on to familiarize themselves with the MUC classification system and to practice operating the GPS units. "Fall is absolutely the time to be preparing for a MUC-a-thon because you need that prep time," Bourgeault said. "Students should be practicing now to be ready in the spring."

Another Maine school, the Mary Hurd School in North Berwick, in the southernmost coastal part of the state, recently reported MUC classes for six land cover sites in their area. Cindy Langdon, the school's GLOBE-trained science coordinator for K through sixth grade, said she has been working with fifth-grade students on satellite imaging and land cover mapping. In sixth grade, they take out their MUC classification booklets and are ready for ground-truthing. "The kids are always very enthusiastic and very concerned about the integrity of what they're doing," Langdon said. That school is also planning another MUC this spring, so Maine is going to be a busy place again.

For more detailed MUC information on the land cover and phenology of sections in Maine explored by GLOBE students, see the Auburn Land Lab and Mary Hurd School.