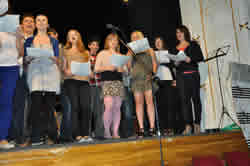 In 2012, the Czech Republic held its 15th Annual GLOBE Games. The event took place in the picturesque town of Litomyšl, Czech Republic and was hosted by GLOBE Partner organization the TEREZA Association, along with Gymnázium Aloise Jiráska (the Grammar School) in Litomyšl. The theme of this year's Games was "We Have Been Rolling It Together for 15 Years." Students, teachers, and headmasters of 30 GLOBE Schools were invited to join in the festivities, fifteen of which have been involved with previous GLOBE Games. The TEREZA Association strives to enhance environment understanding and sustainable development, and pass on these values to the students they work with. 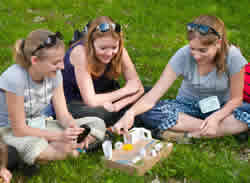 The GLOBE Games were held over a four day period in May and were filled with fun and creative activities. To kick things off, participants gathered for the highlight of the event—the opening ceremony, held in Litomyšl town theatre, where students from the hosting school introduced themselves, played instruments, and sang songs. The TEREZA team presented a special film to introduce the activities of the next three days to all participants. The film also reflected on the previous 14 years of GLOBE Games. Students and teachers from all 30 participating schools were introduced and then put into groups to prepare for the next day's field activities. 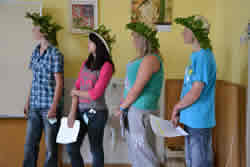 A "Field Day" took place during the second day of the Games and was held in a nearby park. Teams of six students were challenged to develop a project that revitalized the natural area around their town. They were instructed to develop a proposal that takes environmental aspects of the area into account as well as adding a recreational potential to the area. It was the students' responsibility to explore and research the issues and make use of local resources such as municipality offices and local consultants. Students presented blueprints and 3-D models of their team projects, which they chose from the following: 1) Build an aquapark; 2) Build a climbing center; 3) Build a mini-zoo; 4) Revitalize an existing park. 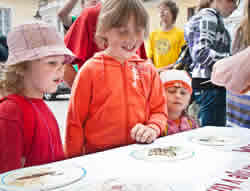 One of the teams that choose to build a zoo described how they would use nature materials to build fences and living quarters. They plan to have mostly local animals there and prepare various activities for children and the public throughout the year. Another team chose the revitalization of existing park. They wanted to utilize it for sports (cycling, in-line skating, running, cross country skiing) and also for relaxing near the beautiful ponds, streams, and forests. After developing their projects students consulted experts that could provide guidance for each of their specific projects. For example, soil consultants helped students to investigate if the soil in the area is suitable for building an aquapark. Atmosphere specialists helped them to determine if there are enough warm days during the summer. They also visited with a special PR consultant in preparation to present their projects to a local television station. 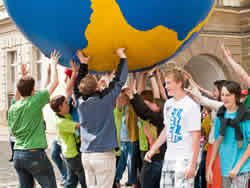 In addition, a Student Conference and Festival featured a collection of research projects that GLOBE students from around the country engaged in throughout the 2011-2012 school year. GLOBE Alumni were invited to open the Student Conference to allow current students the opportunity to meet former GLOBE students who are now working in the science world. This was encouraging to the young students as they were able to see how GLOBE can impact their future. Czech Republic's GLOBE Alumni Founder, Tomáš Tunkl stated that, "GLOBE changes lives…it directs them to science, helps them connect with nature, and even helps them make friends. Speaking for myself, I have become aware of different cultures and discovered a desire to know them better. Together we create a rich community of people that helps to change the world."

During the conference, students presented their projects to their peers, the scientific expert committee, and the general public. Presentations were organized by classes, allowing attendees to choose which presentations they would like to attend. Student projects featured three main areas: forming a hypothesis and verifying it, solving environmental issues, and recording measurements and observations.  A public Festival marks the closing of the GLOBE Games and includes school presentations designed to showcase GLOBE to the community, cultural programs unique to the Czech Republic, and incorporates rolling the inflatable globe across the main square which has become a traditional event for both the GLOBE community and the general public during this annual event. GLOBE schools

Europe and Eurasia Regional Help Desk Office contact Mrs. Dana Votápková stated, "The GLOBE Games provided a meeting place for GLOBE teachers and students from around the country to celebrate science education and student projects while encouraging network building among peers. It is beneficial for participants as they gain new knowledge and experience, taking part in environmental challenges that involve numerous GLOBE protocols."

Read GLOBE Stars about past GLOBE Games in Czech Republic:

New Face of the National GLOBE Games in the Czech Republic