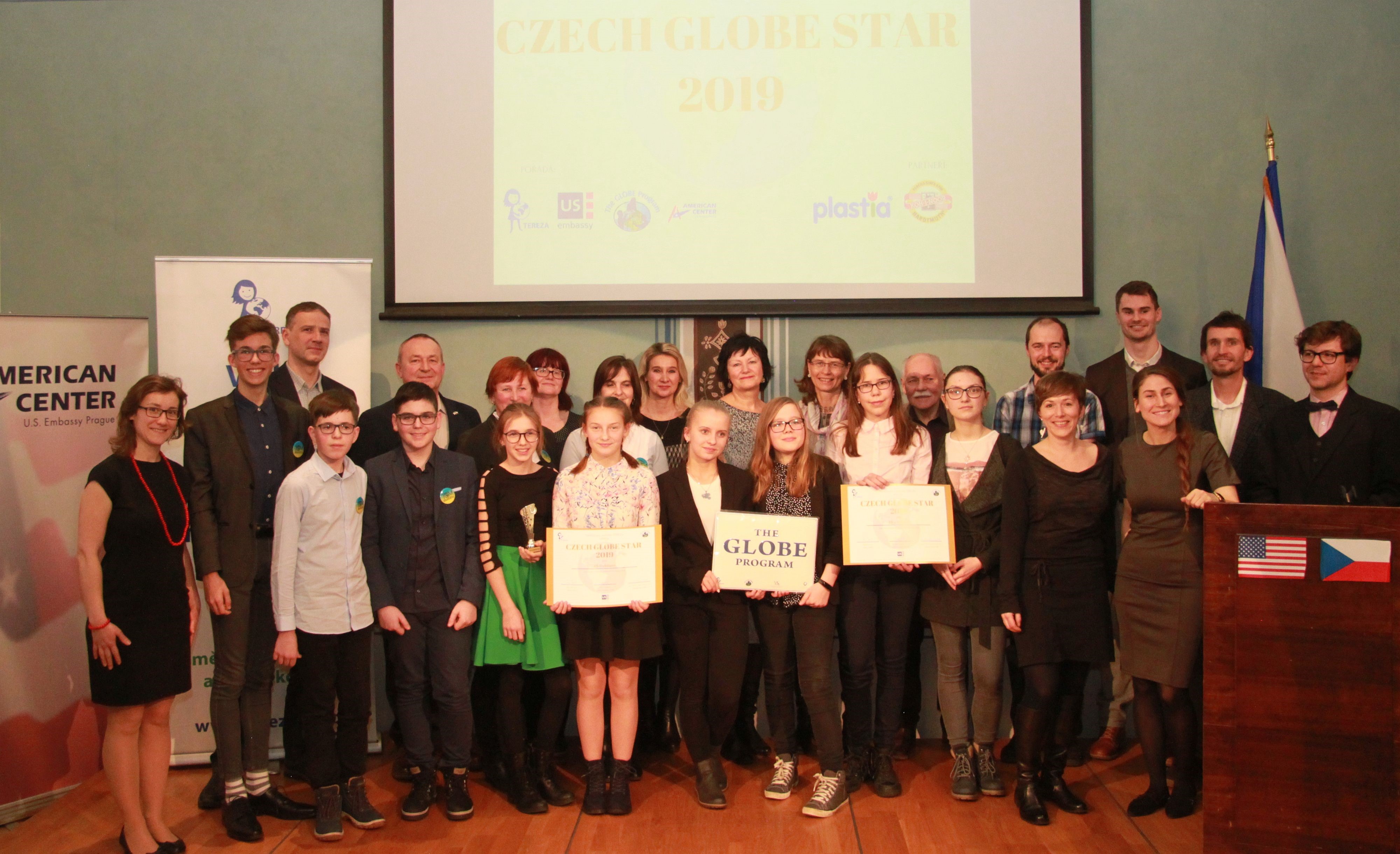 In February 2019, GLOBE Czech Republic awarded three GLOBE schools with the title "Czech GLOBE Star 2019" for their significant achievements during the year. This yearly acknowledgement of students, and their superior GLOBE-related efforts, began in 2016. Awarded schools receive diplomas, medals, and gifts from members of the Scientific Board of TEREZA Educational Center and the Regional Coordination Office of GLOBE’s Europe and Eurasia Region.

"The GLOBE coordinators in the Czech Republic wanted to organize a special event at special place, and with special guests, to award schools for their amazing work in the program," said Bára Semeráková, from the Europe and Eurasia Regional Coordination Office. "Thanks to the long-term cooperation with the U.S. Embassy, the opportunity to organize such an event in the American Center in Prague become real. Since then, the ceremony is held annually in the month of February."

The 2019 event began with a warm welcome, given by Erik W. Black, the Cultural Attaché from the U.S. Embassy in Prague, and Professor Bedřich Moldan from Charles University in Prague, who is also a member of the GLOBE Scientific Board. During the event, students and teachers were invited to interact with the event’s honored guests who serve on The GLOBE Program Scientific Board: Josef Brůna, from the Czech Academy of Sciences; Michal Plundra, from the Science Center; and Jan Spratek, from the European Space Education Resource Office (under the European Space Agency).

Throughout the event, students kept things vibrant with their creative presentations. In 2019, the audience was able to experience three outstanding presentations, where students proved that they are not only talented in science, but also in drama and expressive communication. "One could say that the 2019 ceremony did not go without experiments, fire, and emotions on the scene," Semeráková said.

“We often get feedback from teachers who say that appreciation of their efforts and students activities is one of the strong motivators that encourage them to keep The GLOBE Program going, and to develop it further at the school,” Jan Blažek, the GLOBE Country Coordinator in the Czech Republic said. Awards, certificates, and other forms of appreciation help teachers to get acknowledgment and support from their school management.

During the event, a teacher commented on how the school community received her, and her students, after they returned from the Czech GLOBE Star ceremony: “We are delighted. We all had our moment of glory back in our school.”

“The gala evening at the American Center was very successful and sealed the long-term collaboration of The GLOBE Program in Czech Republic and U.S. Embassy in Prague," Semeráková, from the Europe and Eurasia Regional Coordination Office, said. “The award ceremony serves as an opportunity to bring together scientists who contribute to the program.”

“Although the Star Award goes to the entire school, it is the GLOBE students who represent the community the most at the ceremony,” Semeráková said. “They always prepare a short presentation of their science activities, which gives them the opportunity to practice their skills in an important arena of communicating science.”