Into the Woods with GLOBE New York Metro 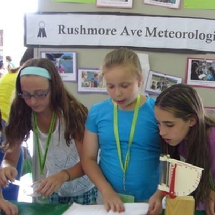 On 12 June 2015, 900 students from twenty-eight elementary schools across New York presented projects on the environment at the “Into the Woods Science and Arts Symposium” hosted by Queens College. Into the Woods is a four-year professional development program that trains elementary school teachers to extend their classrooms outdoors into nature and to enhance their students’ environmental literacy through the use of GLOBE protocols and activities. This event allowed students and teachers to present their GLOBE inspired projects with other members of the community and also with the Queens College community.

During the symposium, many classes presented projects using creative and novel approaches to illuminate Earth systems and the environment. 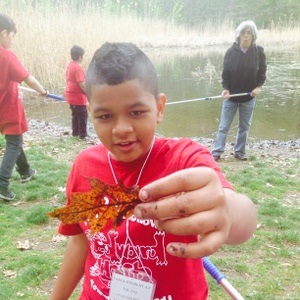 These presentations included a broad range of topics, from local habitats and biodiversity, weather studies, comparative soil characterization and soil fertility studies, to water quality and aquatic macro-invertebrates surveys and phenology. Several classes created guidebooks identifying plants and animals that they had discovered and named through their studies. A number of classes created works of art or poetry based on their experiences and which were inspired by New York City’s wildlife and habitats.

For example, Ms. Marie Suchan’s class from Flushing Queens in New York City presented their study of macro-invertebrate assemblages with artistic representations of a number of species that they had observed and collected in a nearby pond. Ms. Suchan said that the event was one of the best experiences of her students’ elementary school lives: 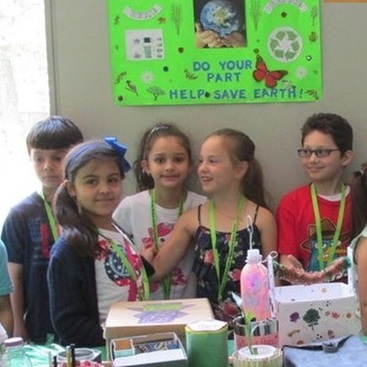 “They embraced their roles as presenters and scientists today and are committed to being active in learning about science. They care about nature. They care about learning. We are all so proud and happy! What a memorable day.”

Several other classes presented service-learning projects that addressed environmental problems they encountered while exploring their local environment. These projects included school gardens for vegetables, wildflowers and milkweed plantings for the nourishment of future generations of monarch butterflies.

A first-grade class from Queens showed a movie of a play that they had filmed about reducing, re-using, and recycling waste products. As one student-actress in the play explained, “I think that the most important thing about this project was helping the Earth so that it doesn’t get covered in garbage pollution.” 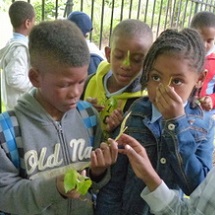 The “Clean, Green, Composting Team” from school PS 205Q in Bayside, Queens did a presentation on the fungi, bacteria and invertebrates at their school that work together to compost organic material and reduce the amount of waste sent to landfills. The team was even featured in the local Bayside Queens Tribune Newspaper for changing the culture of their school and influencing other schools to start composting as well.  In 2015, the team built their own composting bin with wood and power tools and received a Golden Apple Award to further expand their project.

Symposium audience members included the students’ peers, parents and teachers, as well as Queens College students, professors and members of the press.

“We had a wonderful chance to view and learn about other schools’ projects. I felt the amazing atmosphere where we all showed compassionate hearts for the Earth,” said fifth-grade student, Eliot Seol.

Adventures and service learning projects continue to thrive and grow across New York City, with teachers involving their colleagues and other schools through the support of GLOBE New York Metro, the Wallerstein Collaborative for Urban Environmental Conservation Education and other environmental organizations across the city. Classes are already preparing for the fourth annual Into the Woods Symposium set for spring 2016.

Note: Into the Woods is a four-year professional development program funded by a grant from the National Oceanic and Atmospheric Association that trains elementary school teachers to extend their classrooms outdoors into nature and to enhance their students’ environmental literacy through the use of GLOBE protocols and activities.